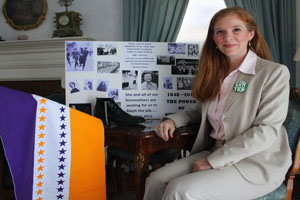 When Carolyn Cook, SOC/BA ’90, was laid off from her job at Discovery Communications, she decided that corporate America was not for her and it was time to fight for something she truly believed in: women’s rights.

After being laid off, Cook went on the campaign trail with Hillary Clinton, where she was shocked at how Clinton was covered in the media compared to the other candidates.

“This was someone I could be involved with and follow, and to watch as a supporter how she was treated in the media and how her supporters were virtually non-existent in the media,” she says. “I began taking my communications skills from college and doing a newsletter about all the positive coverage I could find about Hillary…I focused on the incredible double standard of women running for office and the men who ran against them.”

Since the campaign, Cook has been working on behalf of the Equal Rights Amendment (ERA), which expired in 1982. It was three votes short of ratification and has been introduced in every Congress since it expired. The ERA would eliminate all types of discrimination based on sex. To fight for this issue, Cook founded United for Equality, LLC, in 2010 to push for the ratification of the ERA and spread awareness about the issue.

“Many young women don’t know the ERA existed in part because women’s history is not taught in schools,” Cook says. “They’re not aware of what the ERA meant for lives of women 30 years ago and how it affects their lives today.”

Outreach is one of the crucial parts of what Cook has been doing. She has spoken about the issue to a number of groups like attendees at the Mid-Atlantic Women’s Studies conference with AU constitutional law professor Jamie Raskin. Cook has also come back to AU to speak to the College Democrats and sociology professor Jill Brantley’s class.

“I didn’t remember that the campus was as inviting to students and as well-connected as it is now,” she says. “It was really fun to come back on campus because I wasn’t as into politics while on campus as I became after college.”

As she continues promoting the ERA, Cook finds it inspirational to follow in the footsteps of the first woman who wrote and pushed for its ratification in 1923, Alice Paul.

“Just knowing that I’m honoring the legacy that Alice Paul left for us, which is this amendment, to walk in her footsteps today and keep the legacy alive is the most self-satisfying work that I’ve ever done in my life,” she says.

Cook and the members of United for Equality are pushing for the ratification of the amendment by 2015, and they have already seen some success. Congresswoman Tammy Baldwin (D-WI) will reintroduce the ERA in March as a part of Women’s History Month.

“I encourage anybody - professors, students, alums - that is interested in the progressive issues of equality for all people in our society and in particular that we create a better world for our daughters than we have right now to come down to D.C. in March,” she says. “There is no reason why we shouldn’t have a great cohort of AU faculty, staff and students down when we have it introduced.”