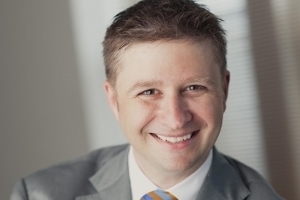 For almost every AU Basketball game, home or away, Christopher Burns, SIS/BA ’07, put on an AU training uniform, painted his face, and cheered for the Eagles at the top of his lungs. Often, he was one of just a handful of fans in Bender Arena, but his enthusiasm was anything but meager.

In fact, during an interview with ESPN, former James Madison University men’s basketball head coach Charles"Lefty" Driesell once said that he never paid attention to the opponent’s fans, with the notable exception of Burns, whose presence simply could not be ignored.

Standing out in an already small crowd, Burns was used to getting attention and being featured on television as “the AU fan.” At one game during his sophomore year, Burns remembers a man approaching him.

“He handed me a business card and told me to call him if I wanted a job,” said Burns. “I was a sophomore and didn’t realize the opportunity. I never called him.”

Luckily for Burns, the man, who turned out to be AU alumnus and top executive of sports marketing businesses Craig N. Tartasky, SPA/MPA ’80, tracked Burns down several weeks later. After chastising him for not calling, Tartasky asked Burns to come in for an interview and later hired him.

This interaction in Bender led not only to a close bond between Tartasky and Burns, but also solidified Burns’ future in brand and customer experience.

Today, Burns is director of content and entertainment curation for The Cosmopolitan of Las Vegas. Continuing his passion for brand management, Burns works to oversee everything a guest hears or sees, with the exception of live entertainment.

His responsibilities range from answering guest inquiries to working with consultants to add new content to the property. Most recently, Burns worked with creative agency Digital Kitchen to transform the resort’s 500 digital displays into a living art canvas. From the marquee to the casino to the elevators, The Cosmopolitan worked with Digital Kitchen to give guests the chance to be immersed in a beautiful digital experience.

Upon walking in to The Cosmopolitan’s lobby, guests are presented with eight floor-to-ceiling columns that display different digital images. One of the images displayed, known as Seduction, creates the illusion of volume within the columns, as if there were people inside of them.

The creative endeavors of Burns’ team, along with Digital Kitchen, resulted in two awards at The Cannes Lions International Festival of Creativity, the world's largest and most prestigious international annual awards for creative advertising and communications.

Although Burns maintains that he never thought he would end up working for a hotel in Las Vegas, he credits his career trajectory to his friend and mentor, Tartasky, for giving him guidance and his first job.

“If he hadn’t tracked me down and made me interview with him, I would have never gotten to where I am today,” said Burns of Tartasky. “Life presents you with opportunities. Sometimes they work out, sometimes they don’t, but the key is to take something positive from every experience.”