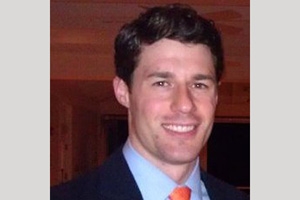 “I first visited AU in the summer of 2002. That one visit was all the convincing I needed to apply and attend,” says Chris Kalna, Kogod/BSBA ’08, while describing the benefits of graduating from the Kogod School of Business.

Born in Albany, New York, and raised in Whitehouse Station, New Jersey, Chris feels that “AU’s size, location, the diverse background of the Kogod professors, and other like-minded students” were the most important factors in deciding to become an Eagle.

Chris is adamant that his AU degree has been crucial to his career success. “The school’s location to leaders of industry in Washington, its reputation for high academic standards, and the thoughtful guidance of my professors gave me the foundation I needed to graduate and begin my career,” he says.

After graduating in 2008, Chris worked in the IT and business consulting fields for companies such as Booz Allen Hamilton and Deloitte. After traveling in these jobs for several years, he changed careers in 2014 and now works in private equity for The Carlyle Group in Washington, DC. As an associate vice president, he manages the firm’s digital strategy. His work impacts many areas, such as Carlyle’s corporate website, employee intranet, mobile device strategy, cloud technology resources, document management, and social media. He enjoys having a direct impact on the firm’s strategy. “Our company is large enough to produce outstanding returns for our clients, yet small enough that my thoughts and directions can change corporate culture,” he says.

During his time at AU, Chris recalls spending late nights with other Kogod students working on case studies, class projects, and study guides for exams. “Working together with my peers helped me build lifetime relationships and allowed me to work on the skills I needed to succeed in my career,” he says. Chris was also a part of the Delta Tau Delta fraternity and one of the founding members of the AU’s men’s ice hockey team.

In his spare time, Chris enjoys cooking with his wife, Catherine, playing the role of doting dad to their four-year-old English bulldog, Dolly, and reading about personal and professional investment opportunities.

Although he’s busy with both work and family, Chris finds time to volunteer as a member of the AU Alumni Board. In this role, he hopes to strengthen the relationship between the university and alumni, lead the effort for alumni surveys and data gathering, and help direct the board to areas where their impact and work will be felt the most. “The AU Alumni Board is giving me a fantastic opportunity to give back to the school that has given me so much,” says Chris.