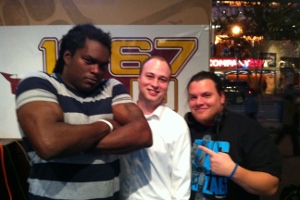 As the program director at 106.7 “The Fan” in Washington, D.C., Chris Kinard, SOC/BA ’01, or “CK” as he is better known, loves that there’s no such thing as an “average day.”  Responsible for the on-air product and operations of the station, he oversees all news-gathering, including sending reporters out to cover stories, as well as marketing and branding of the station.

Charged with providing compelling content at all times, Kinard says he is always on the lookout for intriguing topics.  The news staff meets daily to discuss the content of the shows, and Kinard is responsible for making sure all stories are covered and the sales staff has the right material they need for promotions on-air.

“The beauty of doing a live broadcast is that you never know what people are going to say,” says Kinard.  For example, Redskins Clinton Portis and Chris Cooley both made recent headlines because of things they said on the station.

Kinard’s career in radio began while he was a freshman at AU.  He had always wanted to work at a radio station, so he wasted no time in introducing himself to one of the on-air personalities when the opportunity presented itself. He volunteered to help them, and scored an internship with the show.  Three months later, he was hired to work there part-time, and by the end of his sophomore year, Kinard was hired at the station full-time.

Not content to just get radio experience, Kinard pursued other opportunities in communications while at AU, too.  He interned at ABC TV’s Channel 7, and worked 20 hours per week at ATV, which he describes as his “best experience at AU.”  Kinard loved ATV because it afforded him the chance to interact with many different people in many different situations.  He was involved in the station all four years of his time at AU, in positions ranging from news anchor to assistant general manager.

Kinard stayed on at the station after graduation, and within a year, the show he was working on was moved into the morning slot at sister station, WHFS.  Then, in 2007, at just under 28, he was promoted to program director at 106.7.   He recently led the station through a major format change, from a talk station to a sports station.

“It’s a good time for D.C. sports,” he says, passionate about building the station as the Nationals and Wizards build their followings.