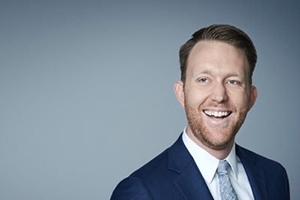 Dan Merica, SOC/MA '11, came to AU from Boston to pursue his dream of becoming a broadcast journalist. Growing up in Las Vegas, he wanted a different experience than what his hometown offered. After receiving his undergraduate degree, he chose to come to AU because of its location, the proximity to political reporting, and its well-known reputation in journalism.

Dan is now a political producer for CNN. He covers the White House and also covered Hillary Clinton's 2016 presidential campaign. Dan has worked for CNN for the past five years, holding multiple positions, including intern, news assistant, and online news writer. As many new journalists do, Dan had "grueling" overnight shifts before transitioning to the politics team.

In fall 2014, Dan was asked to cover the 2016 presidential race, specifically Hillary Clinton's campaign and the Democratic Primary. Dan says that it is was important for him to bounce around early in his career so he could figure out his strongest interests.

While covering the 2016 presidential race was the highlight of Dan's career, he did admit that it was tough. "I was on the road traveling constantly, so much that I even gave up his DC apartment because I was never there. After the election, I felt I probably couldn't do it again – because it was so intense." Dan states. Now, though, he is looking forward to the 2020 election and doing it all over again.

Dan loves his job because no day or week is ever the same. He describes it as a career that is "constantly changing, challenging, and different." He describes his days as "going to the press briefing room in CNN's offices there, working from the bureau, and meeting with the people associated with the White House." He also spends a lot of time writing. His role has morphed into a digital one, and he spends a lot of time writing for the web, reporting news, and working to build sources inside the administration.

Dan attributes some of his success to experiences, lessons, and connections from AU. As a student, he interned at CNN because one of his mentors at American was a producer there. His mentor assisted with writing and story ideas and encouraged him to apply to the internship program at CNN.

Dan says his time at AU was "motivating." He adds, "One of the highlights, besides the professors, was the people." The people at AU pushed him to perfect his craft. He described meeting high achievers whom he wanted to emulate. He also reflected on important lessons taught by Professor John Watson in a law for journalists' class. To this day, Dan remembers talking about issues such as free speech and protecting sources. He still uses this information daily.

When asked what advice he would give to those who aspire to follow in his footsteps, Dan says, "When you're starting out, no job is beneath you. You should be eager and ready to do anything within reason. That's how you prove you are there for the right reason."