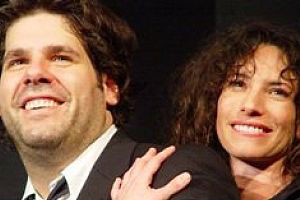 First, Dave Buckman, CAS/BA ’94, trained his flair for funny in Tenleytown, then he moved on to the mecca of improv comedy—Chicago’s Second City—and as far away as Amsterdam.

“I left Amsterdam thinking, ‘If I can teach 20 Dutch businessmen to improv, I can do anything,’” he laughs. “Not everybody’s funny, but anyone can learn to improvise,” which he says teaches one how to listen, let go, agree, and add your own contribution to effectively build with a team.

“Good comedy comes from real life,” he says. “Our reactions are genuine, experienced along with the audience.”

Buckman and his fellow performers take suggestions from the audience and assemble a setting, plot, and characters with surprising results. Currently, he performs as part of the Frank Mills improv troupe and produces a comedy festival in Austin, Texas.

He calls his time at Second City a dream come true. “I got to watch talented comedians like Tina Fey, Rachel Dratch, and Horatio Sanz every night and learn from them before they were stars,” he says. He started out at “the Harvard of Comedy” as an usher, then “after six months, they made me night manager and gave me the keys.”

Several years of studying, then teaching at Second City opened the door to a career performing, directing, producing, and teaching at improvisational comedy institutions around the world. When he served as artistic director for Boom Chicago in Amsterdam for two years, he directed and performed with Saturday Night Live cast members Seth Myers and Jason Sudeikis, as well as Kay Cannon, a writer for NBC’s 30 Rock. “I got there four days before New Year’s Eve of 2000, and I knew it was going to be an amazing experience,” he says.

The European audience was a challenge because it brought new rules for comedy. References must change, for example - “they won’t be familiar with Peter Pan peanut butter,“ he says. Also, one must find universal humor:  “It’s best to stick with common themes like boyfriend/girlfriend relationships and work/occupational humor,” he notes.

Since 2005, Buckman has been directing and performing with the award-winning improv troupe, the Frank Mills, with his wife, Rachel Madorsky - who also trained at Second City - as well as three friends. “I’m very happy where I am at right now, performing with my best friend," he says, referring to his “amazingly funny” wife.

Buckman also produces an annual weeklong comedy festival called Out of Bounds. This year, it will take place from August 31 to September 6, featuring “sketch comedy from Kevin McDonald of Kids in the Hall, a comedy duo from Israel, FrankenMatt, who are fellow Second City alumni; and much more.” He invites AU alumni in the Austin area to attend. He will also direct this year’s B. Iden Payne Awards, which is “like Austin’s version of the Tony Awards,” he says.

As a student at AU, Buckman worked on campus at StarQuest video store (in the tunnel, where McDonald’s is now) and took his first improv class at Comedy Sportz in Rosslyn, Va., with Brian Silbert, CAS/BA ’91 (now a producer in LA). He promptly taught his fellow AU theatre classmates some improve games and formed a troupe, Mission: IMPROV-able, performing regularly around campus, including during orientation for incoming freshmen.

“After our first year, we were like rock stars,” he says. He recalls a particular performance in 1996 when Chris Noll, CAS/BA ’98, did an impression of Ronald Reagan dancing the Macarena, which brought the audience to their feet. Buckman notes that Noll’s show Midnight with Chris Noll on ATV turned into Midnight with Chris Wylde on Comedy Central from 2000 to 2001.

Buckman gratefully acknowledges AU performing arts faculty Gail Humphries, Caleen Sinette-Jennings, and Christian Mendenhall who allowed him and his fellow troupe members to practice many late nights on campus. “They were so kind and let us have a run of the place. Without that room to explore and practice together, I may not be where I am today.”