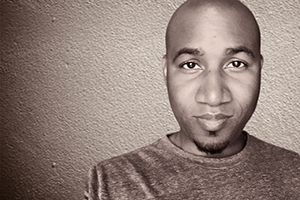 When Demethius Jackson, SOC/BA ’03, studied English in high school, he found himself drawn to books and stories that were in rhyme. He wrote his own creative story in that style as a high schooler, but then forgot about the story for about ten years.

When he finally rediscovered his story, decided to try his hand at publishing it. Demethius reworked the content and built it out into a longer version, then self-published his story on Amazon. To his delight, his writing garnered attention and he embarked on a marketing blitz, including a blog tour and interview circuit. Unfortunately, as frequently happens with side projects, life got in the way and his focus shifted off the book.

A year later, Demethius happened to check in on the book and discovered that he had 500 new Facebook followers, as well as several messages from people across the country who had read his story and enjoyed it enough to reach out. Buoyed by this support and energy, Demethius decided to expand the story and transform it into a literary novel. The Realmsic Conquest: The Hero of Legend was released in the summer of 2013, with a second edition released in August, 2014. A follow-up book, The Realmsic Conquest: The Icon of Earth, was released in November, 2015. Like his earlier work, his novel was well received by the public. The Hero of Legend was selected from among 75,000 entries for the 2015 Watty Award for “Best Use of Visuals” in the largest online writing competition in the world.

One of the things Demethius says he loves the most about being a writer is the community surrounding him and the willingness of successful writers to mentor newcomers to the field. Demethius says he was lucky to find mentors at the right, pivotal moments in his journey. From PR professionals to bestselling authors, Demethius has received guidance from industry insiders. He is also active in the DFW Writers Workshop, which he describes as a group of hard core individuals who are brutally honest in their critique of one another’s writing, but help everyone’s writing style in the process.

As a DC native, Demethius spent time on AU’s campus as a child, and when he decided to transfer closer to home from his original school in Pennsylvania, AU seemed like the best choice. He loved the small class environment and the strong relationships AU students were able to develop with their professors. He credits the skills he learned at AU with helping him to be successful as a self-published writer. “Consistency, persistence, and dedication are the three things I carry with me from my time at AU and use every single day,” says Demethius.