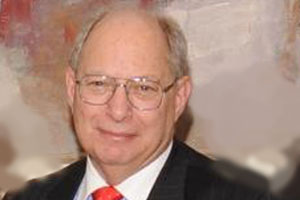 New Alumni Board member Ed Faberman, SPA/BA ’67 has been navigating the world of aviation for the past 40 years. After finishing his law degree in New York, he was able to use his experience as a law clerk to secure a position in aviation law with the Federal Aviation Administration (FAA).

In his early years at the FAA, Faberman helped put together some of the agency’s first documented security measures, “when we started to see hijackings to Cuba and elsewhere,” which have evolved over time. He was also instrumental during the Air Traffic Controller’s Strike of 1981. “It was a very difficult time,” he remembers. “The strike had to come to an end, and we tried hard to resolve it… My responsibility was more to build next steps and build the future, because we didn’t want to see the industry collapse.”

Faberman was honored for his work with the Presidential Award from President Reagan for managing the restructuring of the air traffic control system.

After 18 years, Faberman left the FAA in 1988, but continues his involvement in high-level aviation issues. Now a partner at Wiley Rein, LLP, he represents various aviation clients. As an airline representative, he helps airlines expand their markets to domestic and international cities like London, Fargo, N.D.; Akron-Canton, OH; Savannah, Ga.; and most recently, to Reina Beatrix, Aruba.

“People often just think, ‘Why can’t [the airline] just add more flights?’” Faberman notes. “You can’t. Some markets are closed to new service and the airports need to have the facilities to support more traffic. You can’t fly everywhere you want to fly whenever you want to fly.”

Now, Faberman spends much of his time catching up on new regulatory or statutory proposals involving aviation, various federal agencies involved – the FAA, DOS, DOT, DHS, TSA, etc., and Congressional Committees. “Sometimes there are issues that you never would have thought would impact the industry and the American public” he notes, such as the measures developed to address the H1N1 virus and the health of airline passengers and employees.

While Faberman’s work might keep his head in the sky, his volunteer activities on the American University Alumni Board and School of Public Affairs Advisory Committee keep him grounded.

“Some of my absolutely best friends were AU grads,” he says, which made it that much easier to get reconnected with his alma mater. “When you come back to campus, you see people you haven’t seen in a long time. You’re reconnecting. You realize you don’t live too far from each other, and then before you know it, you’re making plans to get together and attend University events.”

“I truly believe that AU is more than just a university. Going to school here and getting involved with the University has been wonderful. It has been sensational to work with students… it’s been fun to get re-involved and connect with others who have the same interests and experiences that you do.”