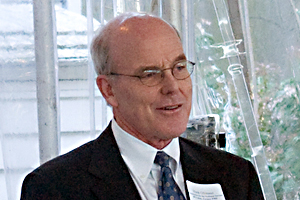 Hank Oltmann, SPA/MS '78, brought his BA in Political Science from the University of California at Santa Barbara and several years of local law enforcement experience to American University, where he earned his master's degree in Administration of Justice.

Though he had always planned to return to California, Oltmann was nominated by AU and selected for the first class of Presidential Management Interns, which led to a position with the U.S. Department of Justice, and the beginning of a fascinating and rewarding 30-year career in federal service.

The program included rotations through Planning, Budgeting, and Regional Operations, and concluded with an assignment to the Senate Judiciary Committee's Subcommittee on Criminal Justice, chaired by [then junior Senator] Vice President Joe Biden.

During his time with the Depatment of Justice, Oltmann was the program manager for the McGruff National Crime Prevention Program, deputy director of the Office for Victims of Crime, and chief of staff to the Assistant Attorney General.

Following an assignment to the White House to manage a Presidential Commission on Illegal Drugs, Oltmann moved to the Corporation for National and Community Service to help launch AmeriCorps. He now leads efforts to engage AmeriCorps in responding to disasters, such as recent hurricanes along the Gulf Coast.

"If not for American University and the PMI program, I doubt I would have joined the federal workforce," said Oltmann. In 1988, he became the first PMI to be appointed to the Senior Executive Service, the federal government's top tier of leadership among its nonpolitical career employees.

Over the past 10 years, Oltmann has given back to AU as a loyal donor; has served on workshop panels about career opportunities, representing his agency at networking receptions for the School of Public Affairs; and has helped students prepare for the tough competitions that accompany prestigious fellowships and internships.

Recently, he was honored to join President Kerwin in addressing AU's 2008 class of Presidential Management Fellows, where he reminded the new fellows of the program's contribution to strengthening the federal workforce. He also commended AU for its remarkable success over the years in helping prepare graduates for selection as fellows.

In his message to the newest batch of AU President Management Fellows, Oltmann said;"The challenges facing the nation make government service - doing the people's business -the most honorable of careers."