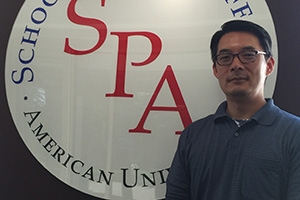 Like so many of his fellow AU alumni, Hyong Yi, SPA/BA ’94, SPA/MPA ’95, truly loves public service. When you ask him about his role as assistant city manager for the city of Charlotte, N.C., Hyong will tell you, “I love this job. This is what I am meant to do.” In his role, he is able to help run the city on a day-to-day basis, particularly with regards to all things environmental.

In high school, a class trip brought Hyong to Washington, DC from his childhood home in Pennsylvania’s Amish country. That trip combined with his love of politics sealed in his mind the fact that he wanted to attend college in the nation’s capital. In the end, American University was the only school he applied to.

As a student, Hyong was driven and hardworking. He completed his undergraduate degree in just three years, then went on to complete his MPA in only one more. He was also a member of the University Honors Program, lived in a Living Learning Center in Anderson Hall, and still managed to study abroad in London for a semester.

When asked to reflect on his time at AU, Hyong extols the virtues of studying abroad and says he thinks it should be mandatory for all college students. Although he was born in Korea, Hyong spent the majority of his life before college living in Pennsylvania, and he loved the opportunity to live overseas for a semester, studying, traveling, and immersing himself in everyday life in London.

Upon completing his studies at AU, Hyong went on to work in DC government for several years. While living and working in DC, Hyong met the love of his life, Catherine Zanga. He and Catherine eventually settled in Charlotte and had two children, Anna and Alex.

In November of 2014, Catherine passed away after a 16-month battle with cancer. To mark the one-year anniversary of her passing, Hyong wrote 100 love notes and he, Anna, and Alex stood on the street and passed them out to strangers as they walked by. The notes chronicle the love story of Hyong and Catherine and, when read in order, tell the story of their courtship and marriage followed by their struggle with Catherine’s illness and ending with what Hyong wishes he could say to her now.

The story received international attention in news and media outlets, and Hyong is thrilled. In addition to the physical notes that were distributed, Hyong gathered all the notes along with photos in a digital monument to Catherine’s life that can be found at 100lovenotes.com and plans to turn the project into a book to be released this year. His hope is that part of Catherine’s legacy will be to encourage people all over the world to write their own love notes and share their feelings with their loved ones before tragedy hits and it is too late.