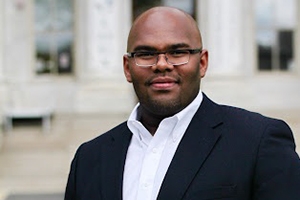 "I knew I wanted to study outside of New York state, so I made AU my first choice. With DC as an extension to the classroom, and the promise of having access to and connecting with current and future world leaders, I could not go wrong," says Jonathan Mathis, PhD, Kogod/BSBA '04, about his decision to study at AU.

Born and raised in Albany, Jonathan's first formal visit to AU was in December 1999, when his family decided to spend Christmas in DC following his early decision acceptance. He also had a brief encounter with the campus while in Washington for the National Young Leaders Conference during his junior year of high school. "We stayed at the 4-H Center in Bethesda and traveled past 4400 Massachusetts Avenue daily," he recalls.

As a student at AU, Jonathan was very active on campus. He participated in the AU Gospel Choir and was active in student government (as homecoming director and Founders' Day Ball co-director). He was also a Resident Advisor, an AU Admission Ambassador, a member of the Black Student Alliance, and the founding father of the Beta Beta Theta Chapter of Phi Beta Sigma Fraternity, Inc. Jonathan points to directing both the Homecoming and Founders' Day Ball during his senior year as highlights of his AU experience. "These two examples point to the various ways in which I was able to help establish university community across the campus," he says.

Since graduating from AU, Jonathan has been studying and working in secondary and higher education administration. He received his MSA in educational administration (K-12) from Trinity University in 2008 and his Doctor of Philosophy (PhD) in urban educational policy from the University of Southern California in 2012. Jonathan believes the foundation of having a Kogod degree was instrumental in how he looks at education through the lens of organizations, leadership, and relationships. "An understanding of marketing, finance, organizational culture, management of people and resources have been invaluable in my early career pursuits and even to this day," he says.

Jonathan is currently director of National Honor Societies at the National Association of Secondary School Principals. In this role, he serves as a resource for tens of thousands of educational leaders, youth development professionals, and future school leaders. "Every day, I am blessed to think about and create conditions for the success of other people's children. I could not think of a better way to exercise my professional purpose," Jonathan exclaims.

When he's not enjoying the arts in New York City or DC, Jonathan enjoys cooking, writing, and serving as a mentor. As a new member of the AU Alumni Board, Jonathan hopes to find ways to engage his peers and other alumni in support of current and aspiring students. "I would love to see increased giving—time, expertise, money, networks—among those who have yet to engage, and deeper levels from those who currently contribute to the legacy of the institution," says Jonathan.