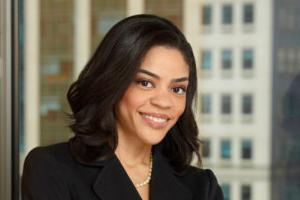 At the peak of the recession, Kelly Smith Beaty, SOC/MA ’05, specialized in corporate crisis communications at Edelman, the world’s top PR firm. With the economy falling and companies struggling, Beaty worked around the clock. Little did she know that defusing crises while sleep deprived would serve her well as a contestant on this season's “The Apprentice,” where she's competing for a coveted job with billionaire real estate mogul Donald Trump.

Straight out of AU, Beaty was on the fast track to the top, landing a job with Ruder Finn, the second largest global PR firm. “I was able to get the job because of my graduate thesis on ethics in public relations… My education at American was directly beneficial for me to get into my industry,” Beaty explains.

In fact, Beaty enjoyed AU so much, her younger sister is now earning her MBA at Kogod. “We’re an American [University] family through-and-through!” Beaty proudly declares.

Despite her career success, Beaty felt unfulfilled and left Edelman. After two weeks of unemployment, Beaty spotted a casting call for season 10 of “The Apprentice.” A long-time fan of the show, the timing was too serendipitous to resist.

This season’s competition is fierce. In a new twist, most competitors are unemployed, raising the stakes. Tempers flare; backstabbing abounds; and no one seems immune to the devastating message Trump delivers to one contestant each week: “You’re fired!”

Amid the chaos, Beaty has kept her cool and contributed her marketing expertise, helping her team win  the September 23 episode's competition selling ice cream on the streets of New York. Beaty may not get much camera time, but that is intentional. Basing her strategy on diplomacy and avoiding the dramatic fights that are a mainstay of the show, she maintained her perspective through the grueling process by writing to her parents nightly.

Although we do not know Beaty’s fate on “The Apprentice,” she will undoubtedly continue to succeed. Dedicated to women’s issues, she has spoken to and mentored girls in middle and high school and is involved with Living Water for Girls, a refuge and rehabilitation center for sexually exploited young girls. Using her communications experience, Beaty strives to remove the stigma from victims of sexual abuse and “change the face of what a child prostitute looks like.”

“I think I’ve found meaning in my life, and fulfillment,” Beaty says, “It’s causing me to reevaluate what success looks like for me and what happiness is.”