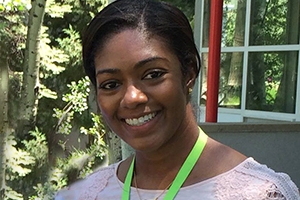 Keosha Varela, SOC/BA '07, SOC/MA '08, currently serves as the digital producer at The Aspen Institute in Washington, D.C. But working in digital production was not originally her career aspiration. "I knew I was going to be a lawyer and later on a politician," Keosha says. "AU was always my first choice school and I couldn't wait to get there. Early on, I realized that rather than campaign to spend a short amount of time on the issue of the day, I could raise more awareness by telling the story and following its development," she explains. Keosha decided to go into journalism, saying that she loves reading and writing. "I still wanted to contribute to society in a meaningful way so I decided to tell people's stories. I wanted to be someone who alerted the world on unjust stories so that we could make a change."

Keosha says she was determined to get as much experience as possible to be able to land a job after graduation. "I used the AU career center and Google religiously" she exclaims, which landed her internships with WAMU 88.5, BBC News, and AARP. Her persistence paid off and led her to the highly competitive NBC Universal News Associates Program in New York City. There she helped to produce segments for the The Today Show, MSNBC, and Dateline. She also worked on the launch team of the African American NBC News website theGrio.com. She went on to become an online news editor for WAMU, an editor and producer for WBUR.org, and the social media strategist for the American Clean Skies Foundation.

When asked what she enjoys most about her career today, she says, "It's such a multi-faceted position. I'm not doing the same thing every day. I enjoy a little bit of everything versus sticking to one task on a daily basis." Keosha's experience has also opened doors for her to delve into her love of writing and interviewing people. As a freelance writer, her work has been published in Sister 2 Sister magazine, The Grio, AARP's The Bulletin newspaper, msnbc.com, and other media outlets.

Through her success, Keosha admits she had to adjust to a few things that come with the job. "There's a good chance of getting good paying job, but you quickly learn digital news is 24-7. Jobs are typically 9-5 but if breaking information needs to be released, you're expected to do so no matter what time it is." She sums up her advice to students into three points.

While at AU, Keosha was involved in a multitude of groups and organizations. She was a proud member of the alto section of the gospel choir and an active member of Alpha Kappa Alpha, Lambda Zeta Chapter. She also served as a resident assistant on the second floor of Letts Hall and in the summers, she was an RA on Tenley campus.

Keosha moved back to the area from New York with a goal of reigniting school spirit in friends and the AU community. Her first step toward this goal begins with her service as a current Alumni Board member. Keosha hopes to continue in digital space and eventually wants to oversee digital and editorial content and strategy. She has loved AU since her freshman year of high school and has her sights set on someday teaching at the college level.