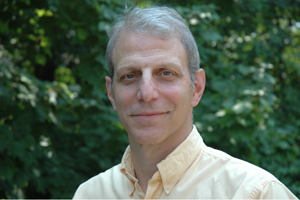 Is a lightning bolt simply a flash of light in the sky? For alumnus Leonard Rosen, CAS/PhD ’81, observation of natural patterns like lightning, crop formations, and veins within a cabbage leaf propelled him into the mathematics of fractals. From his research came his first novel, a literary thriller called All Cry Chaos.

While flying across the country, Rosen surveyed the landscape below. What he saw begged the question, what do patterns in nature mean, and is there, in fact, a pattern maker? Such ponderings led him to study with mathematicians as well as engage theological questions. The result: All Cry Chaos, published in September 2011.

Rosen credits the novel’s success in part to its accessibility. An explosive attack depicts a situation from today’s global community. Readers follow Interpol inspector Henri Poincare as he investigates, and they are treated to Rosen’s descriptive language and dialogue.

Following undergraduate studies at Trinity College (Conn.) in English and education, Rosen taught high school before enrolling at American to study composition and expository writing. He credits the books selected by AU professors as “foundational and meaningful.” During his study at AU, Rosen notes that the “nature and quality of conversation changed me.”

Rosen had the opportunity to co-author a text book on writing, still used in college classrooms today, with an AU instructor, which has led to speaking engagements with composition instructors and graduate students. He also returned to the classroom as an instructor at Bentley and Harvard universities.

He reflects that his experiences at AU contributed to his career path and provided him with “the degree and license” to pursue further literary aspirations. Rosen has written a variety of works, ranging from text books to fiction, and including radio essays for NPR, op-ed pieces, and work on a new novel which will serve as the prequel to All Cry Chaos.

Grateful to earn his living as a writer, Rosen is pleased by the positive critical and popular response for All Cry Chaos. From reviews posted by The Washington Post and The New York Times as well as responses from individual readers who “read the book as he saw it,” Rosen’s excitement is genuine and palpable.

The thriller was nominated for two awards: the Edgar Award for Best First Novel issued by the Mystery Writers of America as well as the first Chautauqua Prize. Rosen humbly views the nominations as recognition of the novel’s literary merit.