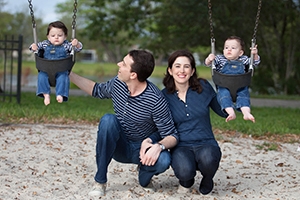 Marla Somerstein Neufeld, Kogod/BSBA '03, says she would do anything to be back at American University. Having grown up in Florida, she was looking for a different experience in college, which is what led her to Washington and to AU. At the time, though, she couldn't have predicted the ways she would use her business degree down the road.

After graduating from AU, Marla worked for a state senator, then went to law school at the University of Miami. That's where she met her husband, Jason. They were married in 2008. The couple tried for four years to start a family before turning to surrogacy to have their twin sons, Ethan and Asher.

"We tried pills…We tried inseminations…We tried multiple IVFs," Marla recalls. Then, she says, they looked for a different option. "I didn't want to subject my body anymore to the process after almost five years of dealing with it." That's when she and Jason began to search for a gestational surrogate.

The Neufelds used an agency to find a surrogate and likened the process to online dating, saying "you get various profiles and you meet with the women and decide whether you are on the same page with your philosophy and lifestyle." Then there are medical and psychological screenings, followed by a contractual agreement.

Marla says the biggest thing that couples face when considering a prospective surrogate is the potential for complications during pregnancy. Under constitutional law, the surrogate ultimately decides what she does with her body, though the possibilities are discussed at length with attorneys and included in contracts. No matter what, Marla says, "you really have to trust this person, which many times is a complete stranger."

The experience of infertility and especially of navigating Florida law around reproductive assistance and surrogacy led Marla to open the assisted reproductive technology section of Greenspoon Marder Law Firm. She says her degree from AU was very helpful in that process. "Having a degree in business gave me the background for opening up my surrogacy law practice…I founded the practice at my firm, so I had to put together a business plan and a marketing plan. I had to pitch it to the senior partners as an associate," she says.

Marla considers it an honor to offer both legal and emotional support to clients. "Not only do I know the law and all the legal issues involved, I know the process. When a client calls me, I spend an equal amount of time talking about the legal issues as I do talking about what we went through and the process I'm able to guide people to the right resources," she says. "I'm so thankful … to be able to now practice in an area that I feel absolutely invested in emotionally."

Outside of their jobs, Marla says she and her husband (who is also an attorney) have adjusted to juggling their schedules around those of their babies. She makes sure she's home each night to play with her sons and put them to bed. She says, "Coming home every day and seeing them…There's just nothing like it."