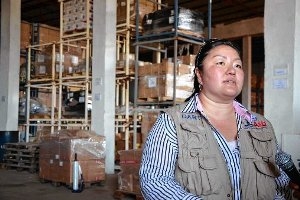 When a catastrophic disaster hits a region of the world and the United States is sending assistance, chances are American University alumna Mia Beers, SPA/MPA '10, is a crucial piece of the puzzle.

This past year, she says, has seen an unusually high amount of disasters, which means that instead of staying in D.C. to coordinate the government response, Mia and many other USAID staff have been deployed in the field.

In November and December of 2014, Mia was asked to lead the Disaster Assistance Response Team (DART) tasked with helping coordinate and support the U.S. government's response to the Ebola outbreak in West Africa. Mia was based in Liberia but oversaw teams on the ground in that country as well as Sierra Leone, Guinea, and Mali.

As team leader, she worked in partnership with the CDC, U.S. Public Health Service, and Department of Defense to provide treatment units, medical supplies such as personal protective equipment, and direct funding to non-governmental organizations (NGOs) and United Nations agencies. Her team also provided critical information to teams on the ground and the media, monitoring the outbreak and reporting on the evolving situation.

"There is a really incredible group of people from the U.S. government -– USAID and other agencies –- responding to Ebola in West Africa," Mia says. "I was just one of many people working on the response. The United States should be proud of its efforts in West Africa."

In any given year, USAID's Office of U.S. Foreign Disaster Assistance will send humanitarian aid to people on behalf of U.S. citizens in response to between 60 and 80 disasters. Four major efforts at the moment include: helping West Africa respond to Ebola, aiding those affected by the South Sudan conflict, working with victims of the Syrian conflict, and assisting displaced populations in Iraq.

Mia's interest in international affairs was sparked during her undergraduate education. After graduating from George Washington University, she got a job in Africa. "I thought I would be overseas for a short time; so did my family, but [while working for CARE in Somalia] I 'got the bug,' and didn't officially come home until 14 years later," she says. During those years, Mia worked for NGOs and USAID.

"I loved working in the field with an NGO having direct contact with communities, and when I moved to the U.S. government, I was really drawn to public service. ... My colleagues and I are proud of what we do. To say you are part of the U.S. disaster response and represent the American people is pretty amazing," she says.

When she returned to the U.S., Mia wanted to "to become an extraordinary leader -- one who inspires people to do their best and willing to take more risks." A recipient of the Donald G. Zauderer Scholarship, she enjoyed learning from her fellow students in the Key Executive Leadership Program at AU.

"You learn from the faculty but also from each other. I learned as much from other federal managers as I learned from professors because we had so many shared experiences," she recalls.