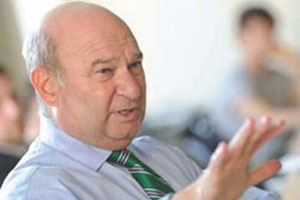 “As historian James McGregor Burns observed some time ago, leadership is one of the most observed and least understood phenomena on earth. This reality, combined with other interests, led me to my study of leadership in the most important venue of all--the White House!”

So says alumnus Michael Siegel, SPA/BA ’72, about his book, The President as Leader, an analysis of the leadership skills of five recent American presidents. Dr. Siegel is an employee training and leadership specialist for the federal court system and an adjunct professor of government at American University, the University of Maryland University College, and Johns Hopkins University.

His book contends that leadership in the White House can be clarified and evaluated by utilizing a constant measurement to assess presidential performance. The four leadership qualities he used to define excellence in the White House included: policy/vision, politics/execution, structure/management, and process/decision-making.

He analyzed whether each president could translate his vision into reality. In this context, does he understand how to lead/influence the Congress, executive branch, and interest groups, etc.? Does he favor friends or professionals in making White House appointments? “When Andrew Card left the George W. Bush White House, he said, I’m so glad I’m leaving this position (Chief of Staff), because now I can be George’s friend again,” Siegel commented.

Asked as to which of the five Presidents studied were the strongest and the weakest, Dr. Siegel said, “Based on the criteria set out in my book, the two strongest presidents were Reagan and Clinton, the two weakest were Carter and George W., and George H.W. Bush was in the middle.” He added, “I am pleased it came out this way, because I promised to write a non-partisan book and focus instead on leadership qualities.”

One of the best parts of writing this book was being able “to secure a study shelf at The Library of Congress, one of our great institutions which every AU student should visit,” says Siegel. His next step would be to add a chapter analyzing Obama since the first edition doesn’t include him.

Dr. Siegel’s daughter, Sophie Siegel, also a graduate of American University (SPA/BA ’11), entered the university through the Washington Semester Program. “The program truly kindled or rekindled her love of learning! She had a great experience and received a great education at AU.”

Dr. Siegel attended AU during the Vietnam War. He remembers sitting in Ward Circle blocking traffic and asking people to honk their horns for peace. “It seems a bit infantile, but we had a ‘"vision’ And in a weird way, we were actually optimistic that we could make a difference.”

In comparison to his AU experience, he commented that his daughter’s years at AU seemed tranquil by comparison and that she and her peers had at least two significant internships and really benefitted from them. “AU has always been effective at encouraging young people to use DC as a laboratory of experiential learning to augment their book learning,” says Siegel.