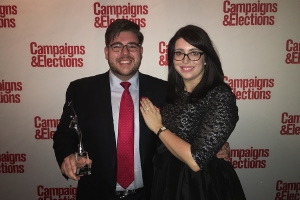 Michael Worley, with his wife Michelle, at the Campaigns & Elections Magazine’s 2016 Reed Awards

Michael Worley, SPA/BA ’12, is the President and founder of MDW Communications, a political consulting firm based in Fort Lauderdale. He has worked on campaigns from the municipal to congressional level, from South Florida, to Georgia, to New England. The firm has won two awards this year, the 2016 Campaigns & Elections Magazine Reed Award for Best Overall Direct Mail Piece, and a Pollie Award. At 25, Michael is one of the youngest people ever to receive a Reed Award. Today it seems everything is going right for Michael and his business, and it all started from a moment of financial desperation in Michael’s junior year at AU.

Michael was an over-worked, underpaid college student with a passion for politics. A national board member for the College Democrats of America for two years, Michael transferred to AU from Miami “to be closer to the action.” To get by financially, he had three different part time jobs and an internship. But all of a sudden in late 2010, Michael learned that his roommate hadn’t been paying rent for months, and they were about to be evicted. To make matters worse, his roommate abandoned the apartment and left town, leaving Michael to take responsibility for the debt.

At a loss for what to do, Michael sought advice from his boss at a Tenlytown cigar shop. His boss suggested he monetize his communications skills and start his own business. Inspired by the idea, Michael got to work right away. He ran a search through AUCareerWeb for companies hiring paid interns, and sent each of them a business pitch, offering his services as a professional social media marketing consultant who could provide better results than an intern could, for a lower rate than an agency would charge. Among his first clients were FroZenYo, American Tap Room, and the cigar shop in Tenleytown. “Things added up so quickly,” Michael says, “I was able to get out of debt and support myself for the next two years in college.”

Now Michael has worked on almost 100 campaigns. He has three full time employees, and produces everything from advanced digital marketing, to direct mail, and now television advertising as well. “Today we produced two direct mail pieces, produced a radio spot, and placed a digital ad, all before 11 a.m.” Michael says. His team is in the thick of municipal campaigns for elections this month. “We are involved in campaigns at all levels, but the local level is where you get to really make a difference. What people don’t realize is that if you don’t vote in municipal and state elections you have no seat at the table. Real policy making and impact on the community happens in the local level.”

Michael credits his AU experience for giving him the resources he needed to succeed as an entrepreneur. “AU was a catalyst for all the things that happened,” says Michael, “AU brought together people who had [started a business] successfully, who were living proof that you can do this if you work hard enough.” When Michael graduated, his decision to continue with his business was influenced by some advice from Chip Griffin, SPA/BA '94, who was president of the AU Alumni Board at the time, and is an experienced entrepreneur. He continues to get new opportunities from fellow AU alums in the political community. Michael is an active member of his local young alumni chapter, and he regularly gives back by volunteering for new and prospective student events.