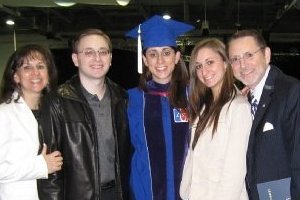 Rachel Weiner, SPA/BA ’04, WCL/JD ’08, has a history of convincing people to experience AU. She encouraged her older brother, Jason, SPA/BA ’01, SPA/MA ’03, to attend AU before she herself was even a student here. Then she influenced her younger sister Lisa’s decision to enroll as Rachel was finishing up her second AU degree at the Washington College of Law.

“We’ve all taken our own paths though,” says the Class of 2005 vice president. “My brother studied political science, I pursued law, and my sister is majoring in music theatre and communications.”

Weiner didn’t waste any time getting involved once she arrived on campus. “AU offered a good balance for me and the ability to find fabulous friends with various interests.”

She was selected to the SPA Leadership Program and was elected to student government her freshman year. She actively participated as a member of the AU Spirit Cheerleading team (which she recruited many of her friends to try out for) and in Phi Sigma Sigma, which she persuaded her sister to join as well. She even served as an RA her junior year on Letts Terrace. “I certainly don’t miss those fire alarms,” she jokes, “and I definitely enjoy a full night’s sleep…when I can get it, of course.”

Now that her five-year class reunion is approaching, Weiner is inviting her many friends and classmates to return to campus. “AU has done so much for me, and a large part of my AU experience was the people I went to school with,” says Weiner, one of seven alumni from her class of 2005 who have volunteered to help coordinate their five-year reunion. “It will not be the same without our class president Chris there though,” she admits, referring to Class of 2005 President Chris Salazar, SPA/BA ’05, who passed away shortly after his AU graduation. The 2005 reunion committee plans to recognize him at the reunion celebration in October amid the happier celebration on Friday, October 22 during All-American Weekend.

“I’m sure other people from my class are up to much more interesting things than I am, and I want to hear about them,” Weiner says modestly, now serving as a law clerk to a federal appellate judge after previously clerking for a federal district judge. Join her and the other members of the Class of 2005 during All-American Weekend. They can’t wait to see you!

Interested in getting involved with your class reunion planning? Contact reunion@american.edu to learn how you can volunteer to help with All-American Weekend 2010.