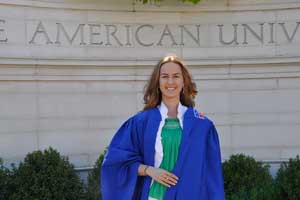 Rita Roman, SIS/BA ’10, knows how to enjoy the journey while always looking for the next step. The newly minted AU graduate has crossed continents, dedicated herself to another family, and buckled down to complete her bachelor’s degree through this simple strategy.

The first footprint in the working world for this self-described “family girl” from Romania was a job in a placement agency for au pairs. For someone who had never left her home country, the efficiency of the process was fascinating. “One day they were filling out paperwork, and the next they were e-mailing us from the United States,” remembers Roman of the young women she helped place.

While her natural shyness made Roman hesitant, in the end her contagious curiosity won out. “I was the one (of the family) who went away. I don’t know how that happened,” she says. But she switched roles and became one of the women she had been helping to become au pairs.

Roman’s first international experience was far before her AU orientation. It was during the four-day training she received when she arrived in the United States to fulfill her two-year commitment as an au pair for a family of three boys in Bethesda, Md. “We were all connected with each other,” she says of her experience with her international peers. “We are all pretty tight.”

While Roman socialized and fit in well with her fellow trainees, her approach to the continuing education requirements of her program took on a more serious tone. While other au pairs dabbled in basic English classes, Roman delved into Spanish and computer science at Montgomery County Community College. Her host family took notice and suggested she continue living with them and consider a four-year institution following her two-year au pair program--this time as a full-time student at a four year institution.

Both University of Maryland College Park and American University were top choices due to their proximity, but AU was the clear winner due to its strong commitment to international students. With her international studies major already chosen, Roman arrived on campus eager as ever to restart her lifelong dream of a college education.

The shift from community college to AU was a bit startling at first, says Roman. “It was so initimidating. I felt so humbled.”

But, as is true with most of her journey, persevering through yet another uneasy time led to more rewarding opportunities. Internships in Sen. Arlen Specter's office (D-PA), and Conservation International solidified her AU experience, guiding her decision to participate in AU’s optional practical training, a program offered to international students and scholars who wish to remain in the United States to gain a year of work experience in their respective fields.

As Roman begins her 12-month tenure at Conservation International, she has a healthy uncertainty about her future again, but it doesn’t keep her from moving forward. “I’d like to return to Romania eventually,” she says, “but I’m not ready to go back yet.”