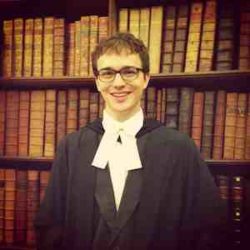 Braxton Boren is Assistant Professor of Audio Technology at American University, where he joined the faculty in Fall 2017. He received a BA in Music Technology from Northwestern University, where he was the valedictorian of the Bienen School of Music in 2008. He was awarded a Gates Cambridge Scholarship to attend the University of Cambridge to research computational acoustic simulation, where he earned his MPhil in Physics in 2010. He completed his Ph.D. in Music Technology at MARL, the Music and Audio Research Laboratory at New York University in 2014. He worked as a postdoctoral researcher working in spatial audio over headphones at Princeton University’s 3D Audio and Applied Acoustics Laboratory from 2014-2016. He taught high school Geometry from 2016- 2017 in Bedford-Stuyvesant, NY.

Braxton’s research focuses on using computer simulation to allow performers to perform and record in virtual spaces that no longer exist. He has performed extensive simulations of speeches from ancient history to estimate crowd sizes and the range of unamplified voices in the past, including simulations of George Whitefield, Julius Caesar, and Elizabeth I. In addition, he has simulated the acoustics of Venetian Renaissance churches in the time of Gabrieli and Monteverdi. He is currently working on an NEH-funded Digital Humanities grant to simulate the room acoustics of J.S. Bach’s Leipzig as it existed in Bach’s day. Through the use of immersive audio simulation techniques, this allows us to record and experience Bach’s music as he himself heard it.