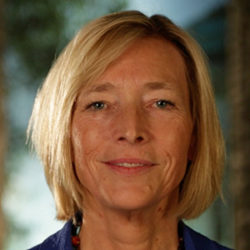 Maggie Burnette Stogner is the Executive Director of the Center for Environmental Filmmaking at American University’s School of Communication. She has been directing, producing, and writing award-winning documentaries for 30 years. Her work spans topics from environment to ancient civilizations to today’s social/political issues.

Maggie was a film producer at National Geographic for ten years and supervised over 200 documentaries for their signature series “EXPLORER” including many expedition films to remote corners the world. Recently, she directed and produced the award-winning independent film “In the Executioner’s Shadow” which won the prestigious Women Film Critics Circle award for Best Directing. This compelling documentary examines the death penalty’s impact on individuals and society. It is currently screening across the nation in community grassroots campaigns. Through her production company Blue Bear Films, she creates large-screen films and immersive media for world-touring museum exhibitions for National Geographic, the Smithsonian Institution, LucasFilm, the Canadian Museum of Civilization, and others.

Maggie is a judge for the Emmy Awards - Best Documentary and Best Natural History categories; a member of the Academy of TV Arts and Sciences; and an Executive Member of Women in Film and Video.