Towards the end of the rain-soaked Woodstock Festival in August 1969, Jimi Hendrix took his Fender Stratocaster and made music history. He lit into a rendition of "The Star-Spangled Banner" that was sublime and exultant. Yet it was also cacophonous and—like so much else from this time period—controversial. That expression of beauty and chaos, unity and discord, may have been the perfect metaphor for the 1960s.

Was Hendrix channeling the turbulence of the times? Interpretations vary. But just like the national anthem, historians are still trying to untangle everything that happened in the Age of Aquarius. American University School of Communication professor Leonard Steinhorn has intensely studied the era, and now he's providing expertise to CNN's documentary series, The Sixties. He taped commentary for three upcoming episodes, which deal with social movements, 1968, and the counterculture, respectively. The episode on 1968 is scheduled to air on July 31. The CNN series is presented in collaboration with several veteran film producers, including actor Tom Hanks.

Steinhorn is also an affiliate professor in the History Department, where he teaches a course on the 1960s.

What ignited such massive social upheaval? In an interview, Steinhorn provides some answers. Steinhorn discusses how a segregated, Jim Crow society was increasingly captured on television. "You had the brutal bombing of the church in Birmingham, the brutalization of Freedom Riders, the fire hoses and the German shepherds attacking people who were peacefully seeking their rights and dignities," he says. 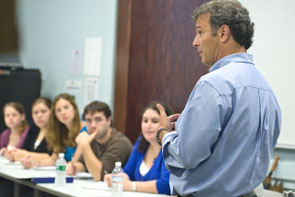 He also describes children growing up in the nuclear age, with accompanying air raid shelters and sirens terrifying them about the future. "They had the sense of either having to pull us back from the brink, or if the world's going to end, we've got to be able to do something about it now," he explains.

Music and alternative publications helped shape a rapidly developing youth culture. You had Mad magazine satirizing middle class conformity. You had rock 'n' roll, which kids increasingly listened to in their cars and out of earshot of their parents. Soul music brought people of all colors onto the same dance floors, he adds.

During the economic boom of the 1950s, the U.S. had a rising need for managers and thinkers to direct the economy. "And how do you get them? You go to universities, which had for years been places of social privilege," Steinhorn says. "You had this growing number of young people who were in universities, and who were there to learn, to ask questions, to see the world, to think critically."

Then, of course, you had the Vietnam War. "That hit everybody in their homes. Either when they were watching it on television, their kids were being drafted and fighting it, or their kids were protesting it," he says.

Steinhorn lectures on 1968 as part of the One Day University program. The totality of what occurred that year was astonishing: Martin Luther King and Robert Kennedy assassinated; the Tet Offensive in Vietnam; President Lyndon Johnson decided not to run for re-election; rioting at the Democratic National Convention in Chicago; Columbia University shut down.

"It was not just the rain clouds gathering. It was an electric storm that hot-wired everything at that moment in time," he says. Yet Steinhorn believes the country proved resilient. In 1969, he points out, the U.S. put a man on the moon.

Steinhorn believes the countercultural forces of that decade had an overwhelmingly positive impact on American life. He deals with this in his 2006 book, The Greater Generation: In Defense of the Baby Boom Legacy. Many of the ideas forged by early Boomers during the 1960s ushered in today's more inclusive society. Racial bigotry has become taboo, and gender equality is a widely shared goal. Businesses are less hierarchical and more participatory, he says.

"We may look back on the counterculture as a quaint relic of the Sixties, but the values that animated it—express yourself, experiment with the new, find your own God, don't take anything for granted, appreciate nonconformity, feel comfortable in your skin, do your own thing—have permeated American institutions, families, and lives," he writes in his book.

"The 1960s was a profound cultural shift. It was a shift in the norms of our society. And once the norms of society shift, once the culture begins to shift, the politics will have to follow," he says.

A Little Better, All the Time

Religious Right leaders blame the 1960s for creating a host of social ills, but Steinhorn emphasizes the repressive nature of the oft-romanticized 1950s. To give just one example, he's examined 1950s help wanted ads (which were separated by gender) in venerable newspapers like The New York Times and The Washington Post. "It was, 'Wanted: woman, 5-foot-5 to 5-foot-7 in heels;attractive.' I mean, we are living in a different universe," he says.

Even some 1960s era progressives have deemed the activist movement a failure, or at least a lost opportunity.

"We were riding the crest of a high and beautiful wave," wrote Hunter S. Thompson in his early 1970s classic Fear and Loathing in Las Vegas. "Now…you can go up on a steep hill in Las Vegas and look West, and with the right kind of eyes you can almost see the high-water mark—that place where the wave finally broke and rolled back."

Yet Steinhorn takes the long view of history. It took decades before Baby Boomers began holding senior positions in business, government, and nonprofits, and changes are starting to reflect that now. "This country has moved in the direction of greater dignity, respect, equality, and freedom. We're not where we need to be, but we're far better than where we were."