The end of fall semester is nearing, and for many students that means completing assignments and finding time to study for exams. The transition from high school to students can be challenging for newly minted first-year students. The freedom of deciding which classes to take, what to eat in TDR, when to do laundry, and what to do during free time can be a lot for first-time college students. These last three months have been a learning experience on and off campus for freshmen as they become acquainted with AU and D.C. We followed the story of one first-year student's journey from high school to college.

For freshman Economics and Political Science double major Harrison Eichelberger, his first college semester has been a pleasant surprise. "I don't always do great with transitions, but this was not as bad as I was expecting," Eichelberger said.

Eichelberger grew up in Elizabethtown, Pa., a town about two hours outside of Philadelphia, and attended Elizabethtown Area High School, which helped him get ready for AU. "My high school was smaller and had a close-knit feel which made adjusting to AU easier," Eichelberger said.

A lot of college freshmen have trouble finding their footing in class their first semester, but so far Eichelberger has been up to the task. "College classes have a quicker pace and are harder than high school, but it makes me feel like I am being treated like an adult, which I prefer," he said.

Eichelberger's only uneasiness is with the D.C. weather. "I do not like the heat--I was born in the cold of New Hampshire." Eichelberger said, adding with a laugh, "I really should have gone to school in New England." 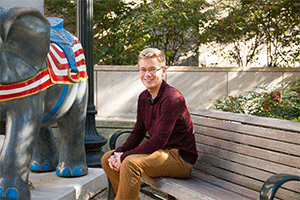 Eichelberger's smooth adjustment may be due to his participation in the National Student Leadership Conference (NSLC) in June 2016. NSLC hosts several conferences on college campuses around the country, and AU has hosted their gatherings for nearly 20 years.

"AU is currently their largest summer site with approximately eight to 12 programs and hosts the biggest conference," Kimberly Araya, Director of University Conferences & Guest Services, said. Her department oversee all AU conferences and guest lodging, and NSLC is annually their biggest event.

"The NSLC bring in the best and brightest high schools students from literally all over the world to be part of the AU programs every summer," Araya said.

Eichelberger said it gave him an opportunity to explore AU. "This was great because I saw AU as a place I could attend, so I was excited to be able to see the campus and dorm life and meet people during that week on campus," he said.

Because of his contributions at NSLC and his high school academic accomplishments, during his senior year of high school Eichelberger was awarded the National Student Leadership Foundation's Alumni College Scholarship to attend AU. That made his decision even easier.

"NSLC called me during class to say they had big news for me," Eichelberger said, reliving his anxiousness at the news. "I had to sit in class for an hour nervously waiting for the big news, since I could not answer my phone."

According to Patty Hester, Director of Scholarships for NSLC, Eichelberger stood out through "his desire and vision to take what he had learned at the NSLC and improve the world around him."

"Harrison demonstrated a dedication to public service and leadership that went above and beyond what one would expect from a high school student," Hester said.

"They had a press release announcing the award, and my classmates and teachers were all very excited for me," Eichelberger said.

With the semester winding down, Eichelberger is looking ahead to the winter break. "I am looking forward to having a full month off between semesters. Plus, Christmas is my favorite holiday," Eichelberger said.

The prospect of next semester brings a lot of excitement as well, although D.C.'s humid spring gives him some pause. "I am taking more classes related to my majors, so I am excited for spring, minus the weather," he said laughing.