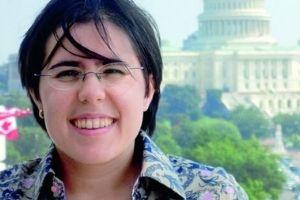 Lilly Maier fell in love with U.S. politics after watching Aaron Sorkin’s West Wing, so she left the Ludwig Maximillian University in Munich to gain experience in DC through the Washington Semester Program (WSP).

“It seemed like the perfect mix of an internship, classes, and visiting interesting places, and it was,” Maier said. “I got to meet many interesting people and learn a lot about how the different institutions in Washington work. And, thanks to Iris Krasnow’s teaching, my writing improved dramatically.”

Maier also recognized Gil Klein, the director of the journalism and new media concentration from the WSP, for helping her find internships and jobs, even after she left DC. It was through Klein’s network that Maier was able to promote some of her work. A recent feature story she posted on Medium entitled “From Organized Chaos to Paid Trips,” is a perfect example of Maier’s political insight and maturing journalism skills. The feature is an in-depth look into the differences between volunteers that worked on the Sanders, Clinton, and Trump campaigns in New York. Some insights she gained from her reporting included:

“Clinton’s volunteers are the most experienced and the most loyal. They are also closely tied to the official campaign and work hand-in-hand with paid Clinton workers. The ones for Sanders were highly motivated, but they loudly and vehemently demanded their independence, so much so that it often seemed they were working against the wishes of the official campaign. Trump has a much smaller number of volunteers, but they were just as outspoken and spur-of-the-moment as the real estate mogul himself (shouting matches between volunteers and staffers included).”

Maier attended the WSP in 2013. During the program, she interned at PolitiFact.com, the Pulitzer Prize-winning fact-checking website in DC. Her article about an Obamacare chain email was the site’s second most read article that year and was shared on Facebook over 50,000 times. Maier, originally from Europe, is a gifted writer in both English and German. She has written for American, German, and Austrian magazines and newspapers, including The Huffington Post, The Columbus Dispatch, Quartz, Presse, FOCUS Online, and currently the Jewish Daily Forward.

“After the WSP, I realized two things: a) I really wanted to return to the States and b) I wanted to earn a journalism degree,” Maier said.

Maier is currently working on her MA in Magazine Journalism as a Fulbright scholar at NYU. Her blog, “Lady Liberty Votes,” an election blog from a New York perspective based on the premise that New York usually votes for democrats, started as a class project. The blog has gained interest this past presidential election since both candidates were from New York. As she continues her master’s degree in journalism in New York, Maier remembers all she learned during the WSP. “It was an amazing experience. I would recommend it to anyone.”