School of International Service on a map

Even when the Cold War was most intense, US President Dwight Eisenhower was keenly aware that the United States and the world needed to prepare for a time when the US-Soviet rivalry no longer dominated foreign policy, and the world could focus on enhancing human dignity. With this in mind, he called together 13 university presidents, including AU's Hurst Anderson, to encourage them to incorporate human-focused international affairs into higher education.

Anderson and the Methodist Bishop of Washington, G. Bromley Oxnam, shared a similar vision and proposed that President Eisenhower support their idea: a school predicated on service to the global community. President Eisenhower embraced the idea and agreed to speak at the school's groundbreaking ceremony in 1957.

Our founders had a vision of peace that would educate citizens planning to be of service. That is the essence of what we do.

Capitalizing on the previous successes of the AU Department of International Relations, SIS opened its doors in 1958 to an inaugural class of 80 full-time students from 36 countries. It offered six innovative programs designed to combine a liberal arts foundation with a specialization in some aspect of the international community.

Today, SIS is the largest school of international affairs in the United States, with almost 3,000 students from 130 countries. Its 20+ programs of study offer students a wide range of possibilities; its students draw upon resources in Washington, DC, and beyond to complete more than 500 internships a year.

While the school and its curriculum have grown and changed dramatically over the last 60 years, its core values remain true to the ideals established by Eisenhower, Anderson, and Oxnam.

Check back throughout the year for more feature stories that celebrate SIS's 60th anniversary. 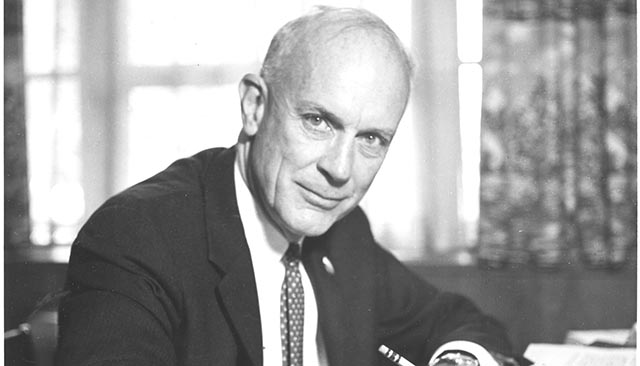 In 1957, Ernest S. Griffith was appointed the first dean of SIS. Prior to becoming dean, Griffith was a Rhodes Scholar and director of what is now the Congressional Research Service. 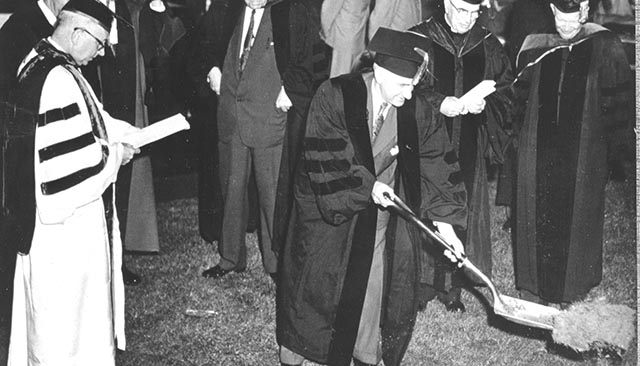 SIS broke ground on June 9, 1957, with the help of President Eisenhower, AU President Anderson, and SIS Dean Ernest Griffith. Curious about what was involved in that ceremony?

In 1959, the School of International Service enrolled its first full-time class, which consisted of 85 students representing 36 different countries. 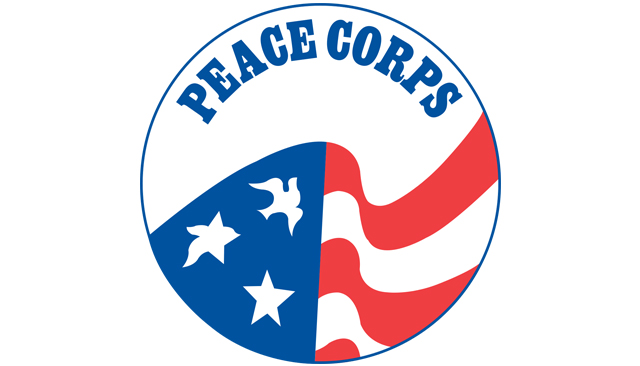 In 1961, the Peace Corps is established and SIS’s long-standing relationship with the organization begins. Today, American University is a top college for Peace Corps volunteers. 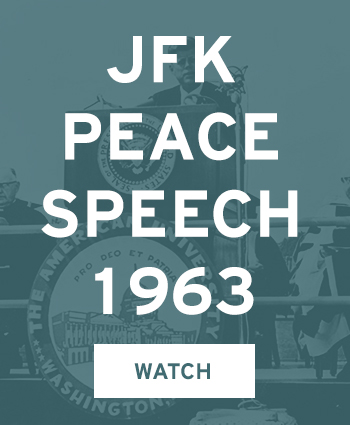 In 1968, the International Communication (IC) master's program is founded in response to growing international engagement and tension. 50 years later, the program is the oldest of its kind in the US and continues to innovate in this dynamic and multidisciplinary field. 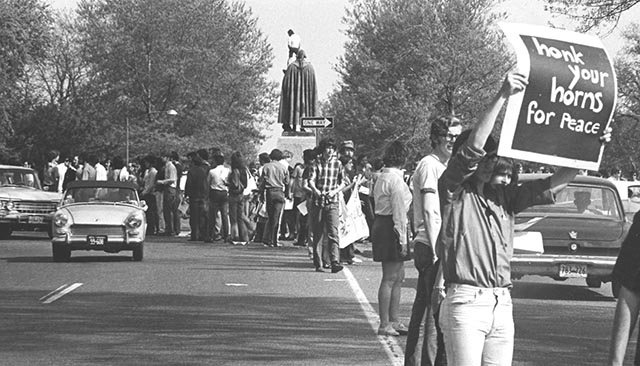 In 1970, classes are disrupted and campus unrest ensues as students protest the Vietnam War. "There was a great deal of anxiety, fear, and courage," recalls Professor Abdul Aziz Said.

In 1973, SIS becomes part of the newly created College of Public Affairs, designed "to emphasize and coordinate the university's extensive undergraduate and graduate programs in public policy studies and public affairs."

SIS continues to grow and becomes a free-standing unit again in 1988, when the College of Public Affairs is disbanded.

In 1974, the International Development (ID) program was established. For more than 40 years, students in the program have strived to improve opportunities for the world's poor and disenfranchised. 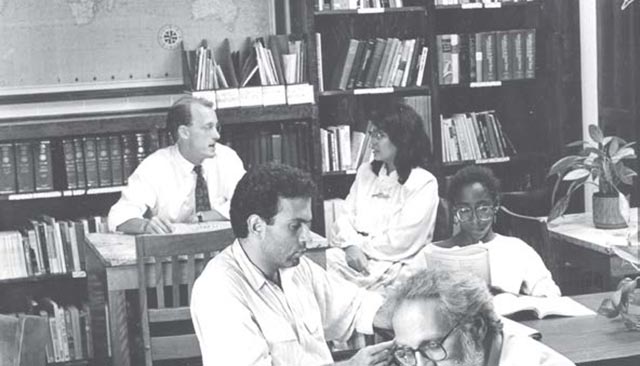 In 1980, the Davenport Lounge sells its first cup of coffee. Before being converted into a study space and coffee lounge, "the Dav," as it is commonly known, was a chapel. 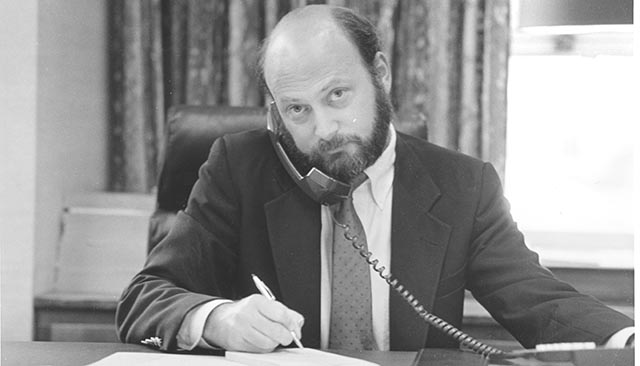 In 1986, Louis Goodman began his 25-year run as Dean of the School of International Service. "There seemed to be no end to the opportunities to develop SIS," he said of his time as dean. 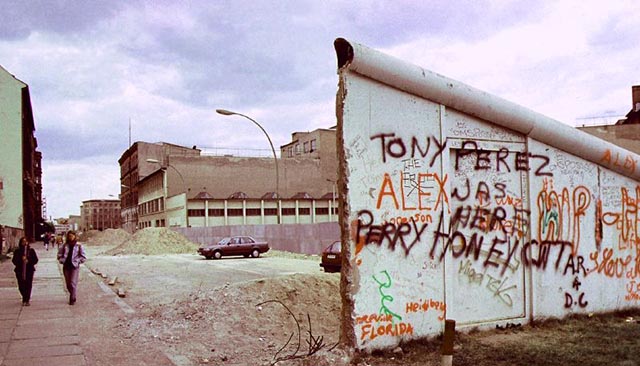 In 1989, the Berlin Wall falls. At the time, SIS professor and Soviet expert Linda Lubrano was more surprised by President Bush's reaction than by the wall coming down.

Following the fall of the Berlin Wall, the collapse of the Soviet Union, and other developments in Eastern Europe, SIS modifies its curriculum and participates in an exchange program with Russia. Alumnus and former White House Correspondent David Gregory, SIS/BA '90, reported on the topic for The Eagle. 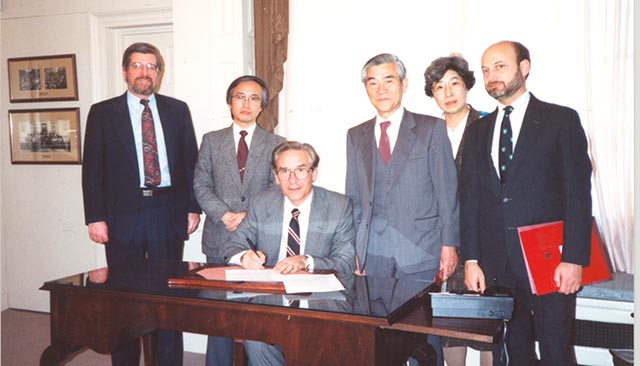 In 1992, SIS partners with Ritsumeikan University to offer the first-ever dual master's degree between the US and Japan. The partnership has grown and now offers a joint undergraduate degree.

In 1995, the International Peace and Conflict Resolution (IPCR) program is established in response to growing international arms race, environmental degradation, and global inequalities. Today, the program prepares graduates to serve the world's most vulnerable.

In 2000, SIS establishes the Global Environmental Politics program, which features a dual-degree partnership with the UN University for Peace in Costa Rica via the Natural Resources and Sustainable Development (NRSD) degree. Graduates pursue careers to protect the natural world.

"9/11 altered the direction of my research. I realized these wars take a terrible toll on soldiers, civilians, and locals, yet without enough social scientists on the ground to study the problem. I found myself in many conflict zones, studying multiple sociocultural drivers of human volatility to help advance stabilization and peace." 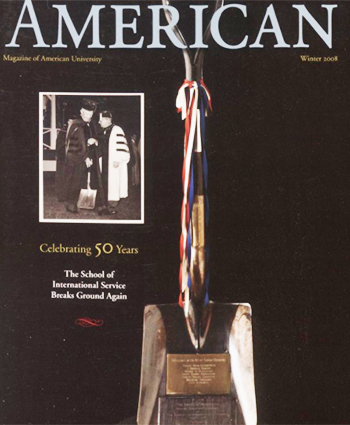 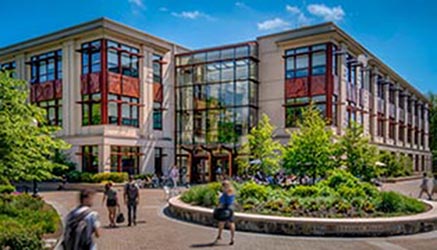 In 2010, SIS  opens the doors to its new home. Designed by green architect William McDonough, the new SIS building was the first on campus to earn LEED-Gold certification. 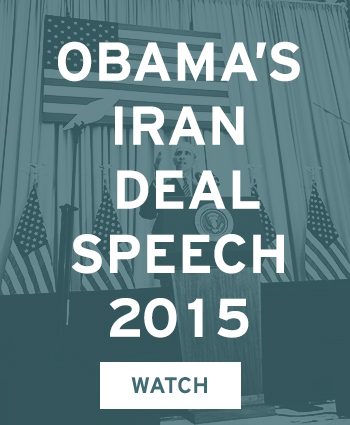