With great sadness, I write to inform you that Professor Emeritus Abdul Aziz Said passed away on January 22, 2021. He was a legendary presence at American University: he served as an icon of the School of International Service for more than half a century. Professor Said, a triple Eagle—SIS/BS ’54, SIS/MA ’55, SIS/PhD ’57—was the founding Mohammed S. Farsi Chair of Islamic Peace and a beloved faculty member for 59 years.

Born in Syria, Professor Said was educated in his country of birth (he was forced to attend French school during France's occupation of Syria), Beirut, and Cairo before arriving in Washington DC. He founded and directed SIS’s Center for Global Peace and worked with students in 1995 to create the MA in International Peace and Conflict Resolution (IPCR). Under his direction, IPCR quickly became one of the world’s largest such programs.

Professor Said was a trailblazer. He helped build the field of peace and conflict resolution in the United States through his 25 authored and co-authored books and through his initiative to bring peace studies, with its emphasis on justice and the underlying causes of conflict, into dialogue with the field of conflict resolution. His scholarship drew early attention to topics underrecognized in the field that subsequently came to the forefront of studies in international relations. His 1963 book, Concepts of International Politics in Global Perspective, co-authored with the then-SIS dean Charles O. Lerche Jr., analyzed non-Western approaches to international relations. His 1977 book, Ethnicity and U.S. Foreign Policy, examined the role of hyphenated Americans on diplomacy. Much of his scholarship analyzed the role of spirituality and religion in international relations, and he was a leader in writing on Islamic concepts of peace. His most recent work focused on localizing peacebuilding.

Professor Said’s expertise was widely recognized by policymakers and thought leaders in and out of government. He consulted on matters pertaining to the Middle East, to Islam, and to peace with the US Departments of State and Defense, the United Nations, and the White House Committee on the Islamic World. In 2007, he was awarded the El-Hibri Peace Education Prize. It is further evidence of Professor Said’s lasting impact on SIS that three separate funds have been established in his honor: the Abdul Aziz Said Phi Epsilon Pi Scholarship assists undergraduate students with a dedicated commitment to diversity, the Abdul Aziz Said Scholarship Fund aids graduate students in the IPCR program, and the Abdul Aziz Said Peace and Conflict Resolution Fund supports initiatives within SIS to foster a deeper understanding of the critical issues around peacebuilding and conflict resolution.

He was a gifted and beloved teacher who especially attracted international students. His mentees included peace activists and leaders around the world, including Germany’s Green Party founder Petra Kelly, SIS/BA ’70. Many of us in SIS-AU have long been accustomed to alumni approaching us during trips abroad to send their good wishes to “Professor.” His course on peace paradigms famously closed with consideration of the role of love and spirituality in global peace. Reflecting his commitment to interfaith inclusion, when Jewish students approached him with frustrations that no campus fraternity would admit them, he helped them create AU’s Jewish fraternity, Phi Epsilon Pi, and he served as its faculty adviser for decades.

A colorful personality, he was known, among other things, for eschewing wearing socks. He had a special flair, serving tea or coffee to all visitors (students, colleagues, and external guests) to his office, reflecting his positive, inclusive, and supportive spirit. Professor Said often cited the “giants” upon whose shoulders he stood. He was a giant, and it is our honor to carry his legacy forward.

On a personal note, Professor Said was a mentor, friend, and confidant since my early days as a junior faculty member in our community. I’m indelibly grateful for his unwavering support and generosity of spirit. His love for the field and for our school is unmatched.

When I was asked once about Professor Said for a story about him, I said that his dedication to the pursuit of knowledge and building a more peaceful world is second to none. It was true then, and now, as I think back over his life, I can only hope that others with the same commitment to peace will step forward to lead, recognizing that they too stand on the shoulders of this giant.

Let us keep Professor Said’s wife, Elena Turner, SIS/BA’82, and their entire family in our thoughts and prayers. We will find an appropriate time to celebrate Professor Said’s life and contributions with our entire community when health and safety protocols permit.

It is fitting to end with Professor Said’s own words, which seem ever more timely: “Peace is not only an absence of violence, but a presence of justice, a presence of equality, and a presence of cooperation.” 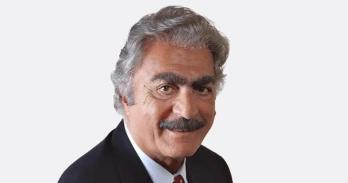