Does a new constitution improve a country's levels of democracy? This is the question a team of American University professors asked and analyzed for their new book: Constituents before Assembly: Participation, Deliberation, and Representation in the Crafting of New Constitutions .

In the last 40 years, 119 countries have rewritten or established new constitutions. Professor Todd Eisenstadt from the School of Public Affairs, Associate Professor Carl LeVan from the School of International Service; and Professor Tofigh Maboudi, SPA/PhD '16, and Assistant Professor from Loyola University Chicago conclude in their book that countries that broadly included their constituents early in the convening and drafting process are the ones that see higher levels of democracy following the ratification of a new constitution. This finding rejects the common belief that democracy stems from the content of constitutions rather than how they are created. 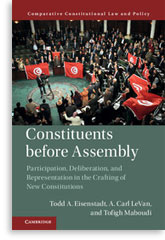 Published by Cambridge University Press, the book was the culmination of six years of work and field research on three continents. The authors examined constitutions in 124 countries between 1974 and 2014 and concluded that broad and inclusive participation in the early stages of constitution making improves a country's level of democracy.

"This research is interesting not just for novel set of interviews, but it informs us of the way we can support democracy throughout the world," said SPA Interim Senior Associate Dean, Alison Jacknowitz. "It is not just the mere act of having a constitution, but also who is involved in the creation that matter - the more the people who have input in the drafting of a constitution, the better the outcome and the quality of the government."

LeVan, associate professor in AU's School of International Service, said the authors were excited that the empirics supported what proponents of democracy around the world have hoped for and fought for over the years. "We hope the book has a lasting influence and it translates into better constitutions and better lives for people who deserve them."

At the launch event, Mila Versteeg, a research professor of law and director of the Human Rights Program at the University of Virginia School of Law, said in many parts of the world constitutions are rewritten frequently and the book provides evidence of the value in meaningful citizen participations.

"Writing a good constitution doesn't mean you actually get democracy," said Versteeg. "We may not know what a good constitution looks like but maybe we can design a good process. We need local knowledge to make sure people themselves are involved. It's a better document because people are invested in it."

After completing the book project, Maboudi, who is now assistant professor of comparative politics at Loyola University in Chicago, is researching the constitutions of the countries that were part of the Arab Spring and writing about the impact that inclusive processes can have on democracy.