The School of Public Affairs faculty and staff mourn the loss of Ed Lorenzen, SPA/BA '92, who died tragically in a house fire in Coventry, Rhode Island.

Lorenzen was an influential budget and policy staffer in Washington, D.C. who had a deep adoration for his children, friends, and former colleagues. He was a native of Pennsylvania who became known on Capitol Hill as "Captain PAYGO" for his diligent, principled work on legislation compelling lawmakers to ensure that any new spending did not increase the national debt. He served for more than 20 years as an aide to Democratic lawmakers, including former House Majority Leader Steny Hoyer, D-Md., and as the intellectual wellspring of the nonpartisan Committee for a Responsible Federal Budget.

"He was a gentle, humble, widely respected man," said SPA Distinguished Professor James Thurber. "He knew the budget inside and out, and he followed it for so many years that he really was the go-to guy during the process. He was a fiscal conservative who felt that we needed to do something about the debt and the deficit, and both Democrats and Republicans respected him very much."

Thurber remembers Ed as a great mentor to SPA students, helping several find jobs on The Hill. Ed visited SPA frequently to speak with students, sharing his experiences and advice.

On The Hill, Lorenzen's crusade for fiscal discipline often succumbed to the realities of Congressional pork-barrel politics, friends and colleagues said, but he never stopped trying. 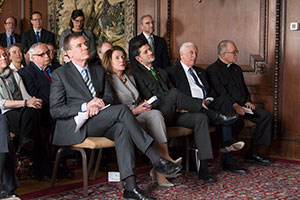 "We take pride that if you're going to be crazy enough to try and make sense out of the federal budget, and you're going to be really crazy enough to try and do something about it, you're a person who gets respect on both sides of the aisle," House Speaker Paul Ryan (R-Wis.), said at a memorial tribute to Lorenzen in April at the Library of Congress. "I think it's the hardest thing in this town to do, to fix this problem, and he ran right at the problem."

"Ed's remarkable career on the Hill spanned two decades," said House Democratic Leader Nancy Pelosi (D-Calif.) "Ed brought unparalleled knowledge, pragmatism, and humor to his work on the federal budget. His wit and brilliance were a treasure to all who had the privilege of knowing him."

For more information about Lorenzen and how you can help his family, visit this link.