As part of their shared Gender on the Ballot initiative, the Women & Politics Institute and the Barbara Lee Family Foundation co-hosted a panel discussion on campus to shed light on what the much-discussed concept of “electability” actually means to voters in the lead-up to the 2020 presidential election.

While the audience of American University students, faculty, and community members enjoyed lunch, Nicole Fossier, Associate at the Benenson Strategy Group presented key takeaways from a recent poll of likely 2020 voters that GOTB commissioned to find explore attitudes on electability and gender as it relates to the presidential election. 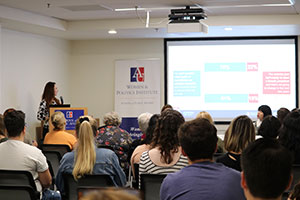 While sometimes “electability” can be used as code for dismissing a candidate who doesn’t look like previous successful candidates, the poll found that voters see qualities like empathy, toughness, and substance as being the most important factors in a candidate’s electoral success. Voters feel that in order to be elected, candidates must have a deep understanding of the challenges average Americans face, the ability to go toe-to-toe with the opposition, and well-thought-out policy proposals.

Electability has been a major topic in the media, and the poll delved into how media is shaping voters’ views of electability. 56% of the poll respondents said that they had heard the media talk about women candidates being unelectable. However, 8 out of 10 rejected the idea that the U.S. is not ready to elect a woman president.

After presenting the top-line findings from the poll, Fossier joined Amanda Hunter, Research and Communications Director at BLFF, and Li Zhou, Politics and Policy Reporter at Vox, in a panel discussion about what the electability discussion means for the women running for president. The panel was moderated by WPI Executive Director Betsy Fischer Martin.

While the panelists agreed that persistent questions about electability, as well as fear stemming from Hillary Clinton’s loss in 2016, make life harder for women candidates, this cycle has the potential to be different. Hunter believes that the women running in 2020 are already changing the game. She said, “There is a stereotype in people’s minds of what a successful presidential candidate looks like, and that is a barrier for the women who are running, but simply by running, the women in this cycle are changing the face of leadership and breaking down stereotypes. Elizabeth Warren and her selfie line [are] accomplishing a lot of things, but one is harnessing social media in an overwhelming volume, to literally change the picture in people’s minds of what a presidential candidate looks like.”

Read more about information on the full poll.

Signup for updates from Gender on the Ballot.