A recent roundtable hosted by the American University School of Public Affairs (SPA) faculty explored the relationship between nongovernmental organizations (NGOs) and local governments in developing countries. The roundtable brought together representatives from federal agencies and international organizations based in the DC metro area.

The past decade has seen donor agencies' and international organizations' increased interest in scrutinizing the effectiveness of international aid and the sustainability of development. The emphasis on accountability has been mirrored by the trend of pushing aid to the local level, with NGOs acting as key players in delivering services to local beneficiaries. This raises questions about the nature of the relationships between NGOs and local governments in developing countries.

A new study conducted in Lebanon by a team of researchers including SPA Professor Jocelyn Johnston and Assistant Professor Khaldoun AbouAssi in collaboration with Professor Ann O'M. Bowman from the Bush School of Government and Public Service, further examines some of these questions. As part of their work, the researchers conducted two surveys, which were completed by a total of 248 local government officials and 223 NGO executives. The surveys investigated respondents' perceptions on issues ranging from how they are collaborating with one another to how decisions are made. "The promising news is that some type of collaborative arrangement across sectors is taking place and even among those who are not currently working together, there is a palpable interest to do so in the future," said Johnston. "We know from the surveys that local governments and NGOs have [a] common goal of improving the quality of local services and building public trust."

Key findings shared with the roundtable participants include the following:

"Another interesting finding," AbouAssi added, "is that some aspects of NGO relationships are vertical [rather] than horizontal, with NGOs overwhelmingly considering their relations with international organizations better than those with local governments; that is why international organizations are called upon to motivate NGOs' relations with local governments to ensure effectiveness of implementation and sustainability of results." 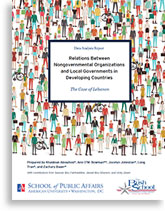