"What are we doing to commemorate the 500th anniversary of the Reformation?" asked Ambassador Anthony Quainton, as he sat in then-university chaplain Rev. Joe Eldridge's office.

It was the spring semester of 2016, and I had happened upon this conversation when I stopped by Joe's office. I will admit that my first thought was: The 500th anniversary of the Protestant Reformation is next year? But as our conversation continued, I wondered if this might be the opportunity to do something special. What if we could use the occasion to do something truly worthy of a university and learn from the occasion?

I became university chaplain that September, and my first order of business was to hold a series of meetings with university officials and key community members. My purpose was not only to introduce myself, but to talk about my hopes for greater collaboration between Kay and the academic units.

As the conversation with a given dean wound up, I would float the idea. "Next year is the 500th anniversary of the beginning of the Protestant Reformation," I'd say. "Do you think [insert college here] would be interested in participating in a campus-wide reflection?" Everyone agreed.

We wound up with 15 events in total: four dialogues or panels, two table talks, a film screening, a lecture, a poetry workshop, a networking fair, an art exhibit, a moot court, two chapel services, and a concert. A truly interdisciplinary and varied approach to reflecting on a single subject.

So, what did we learn from all of this?

The Reformation Has Shaped Our Political Culture

What does a religious movement in 16th-century Germany have to do with the political culture in the United States? Quite a lot, argued School of Public Affairs professor Daniel Dreisbach in his table talk lecture, "The Reformation's Impact on American Political Culture." The Protestant Reformation was built on a number of key theological propositions, among which were the "Priesthood of all believers," meaning that every Christian was able to be their own priest, communing with God directly, and Sola scriptura, the doctrine that theological truth was derived from "scripture alone." No longer did one have to rely on clergymen to explain what the Bible said.

This led to the translation of the Bible into the vernacular, which spurred Christians to learn to read. Biblical literacy yielded a general literacy and a growth in education. That, said Professor Dreisbach, led to an educated populace, capable of republican self-government.

Indeed, in the early American republic, education and virtue were the twin pillars of republican self-government. John Adams remarked that the Bible was "the most republican book ever written," a declaration not of a Biblical warrant for republicanism, but a claim that the Bible nurtures the virtues that a self-governing people requires. This idea was so embedded in Protestant thinking that King George III is said to have referred to the American revolution as a "Presbyterian" revolt.

Of course, Protestant theology hasn't always been aligned with liberty. In a lunchtime roundtable conversation entitled "Protestantism, Racism, and Colonialism," professor of historical theology Beverly Mitchell and professor of systematic theology Josiah Young of Wesley Theological Seminary reflected on the ways that Protestant religious culture colluded with that most despicable of institutions: slavery. Mitchell and Young reflected that there was nothing intrinsic about Protestantism that led to slavery, but that Protestant Christians, deriving authority from the Bible alone, would look for Biblical warrants to defend the institution that was in their economic interest.

To be sure, most of the active abolitionists were Protestant, but American Protestantism has known its share of sin in our social and political life.

The Reformation Has Shaped Our World

SIS assistant dean Michael Schroeder and professor Jeff Bachman argued in their presentation, "From Westphalia to the Responsibility to Protect," that the entire international political order is a legacy of the Reformation. The Peace of Westphalia that ended the Thirty Years War-a decades-long religious conflict between Protestants and Catholics-helped create the modern nation-state as we know it.

The shift away from the imperial confederation of the Holy Roman Empire to the emerging nation-state had tremendous implications for what states could do, Professor Johnson said. Systematic taxation developed, and with it arose state capacity. The state was now capable of doing more and required a greater bureaucracy to maintain. In short, it began to look much like the nation-states we know today.

Dr. Meisenzahl spoke to the question of how legal systems were affected by the Reformation. Whereas Canon Law had operated throughout Medieval Europe, the Reformers were tasked with developing their own legal codes. They sought to chart a new way forward that reflected their Protestant values and provided independence from the traditions of the past.

Nowhere were the changes in law more apparent than in the Washington College of Law's "Moot Court: Luther's Conviction on Appeal." The program, put together by Americans United for Separation of Church and State legal director and WCL adjunct professor Richard Katskee, featured two second-year law students, Brenna Culliton and Krista Ellis, arguing for the appellant Martin Luther and the appellee the Holy Roman Empire, respectively. They argued the case before a panel of three judges from the US Court of Appeals for the DC Circuit: Judge Tatel, Judge Pillard, and Judge Wilkins.

Both law students held their own in what the court acknowledged were two losing arguments. Arguing for separation of Church and State is a given in the modern world, but as the court so ably demonstrated, in the legal world of the emerging Reformation, such ideas were still well outside the mainstream.

The Reformation Has Shaped Our Work Life

The Reformation had an impact on the social fabric of the Western world as well. Key among the tenets of the Protestants was the idea of the "priesthood of all believers." In Luther's thinking, this meant that everyone was their own priest, their own intermediary between the human and the divine. Pastors were no longer required intermediaries between God and humanity. This also led to the increase in lay involvement in the life of the church.

It was with this in mind that the School of Professional and Extended Studies' Anna Beatty put together a "Priesthood of All Believers" lay networking fair. Organizations representing non-clergy religious vocations tabled in Mary Graydon, discussing with students-many of whom brought their resumes-opportunities for lay careers in religious work.

The Reformation Has Shaped Our Art

Traces of the Reformation can be seen in the English poetry of the period. College of Arts and Sciences professor Anita Sherman led a workshop, "Writing from the English Reformation," exploring the ways that themes of religious conflict, choice, and identity entered into the poetry of John Donne and George Herbert. Wrestling with religious identity was central in Donne's poetry, in which he uses satire and irony to personify different religious expressions as different kinds of women seeking his affections. What was a question of choice and identity for Donne is a settled affair for Herbert, whose attitudes toward the Roman church come through clearly in his writing.

In Germany, the Reformation played out in another art form: music. Perhaps the greatest composer of the Reformation period, Johann Sebastian Bach encoded Reformation theology into his very music. To explore this point, the American University Chamber Singers, directed by Daniel Abraham, put on a program entitled, "Bach, Luther, and the Reformation in Theology and Sound." The concert featured three different Bach pieces representing three different liturgical forms: the cantata, the motet, and the mass. Each piece reflects something of the Lutheran religious climate in which it was composed. 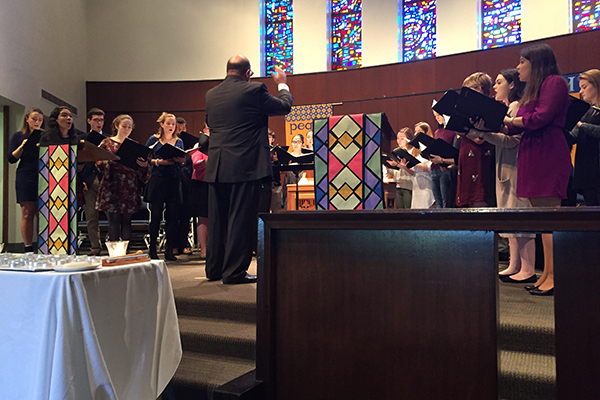 It was not poetry and music alone that were the fields in which Reformation ideas flourished and on which religious conflict was waged; the literature and the art of the day were also greatly affected. CAS professor April Shelford shared her observations in a lecture entitled, "The Power of Print: Religious Conflict during the Reformation." In her talk, Professor Shelford described the ways that the ability to mass produce literature not only stoked the fires of religious conflict as one side used the powerful new medium against the other, but also shaped new modes of expression. The broadside and pamphlet became far more prominent than the book and were easily disseminated, both allowing Reformation ideas to spread, but also making the conflict more immediate.

The Reformation Has Shaped Our Thinking

The impact that the printing press had on the Western world was at the heart of the School of Communications' program, put on by dean Jeff Rutenbeck and professor W. Joseph Campbell. Their talk, "Spurring the Reformation: Enduring Lessons of Media, Technology, and Disruption," focused on the disruptive nature of the Reformation, especially in its use of new media technology. Professor Campbell asked "Why Luther?" and "Why then?" He noted that earlier would-be reformers like Jan Hus had had ideas similar to Luther's but lacked the access to the print medium and its "accompanying social networks." This, coupled with protection from the Elector of Saxony Frederick the Wise, gave to Luther an opportunity to make lasting change that was denied to his forebears. Further, his use of the pamphlet and his writing his works in German, as opposed to the Latin used by the educated, meant that his writing would be available to a much larger audience.

But the lasting change would not be limited to the arenas discussed above. Dean Rutenbeck explored the idea that the Reformation and the print revolution it accompanied changed the way we think. Printing allowed for private-that is, silent-reading. What had once been a communal enterprise, where an educated person would read a text to a crowd of listeners, now became a private endeavor. Even in the abodes of the educated, such as monasteries and universities, reading was done out loud. But now, printing and the fact that Luther made use of pamphlets encouraged individual reading, and this opened the door to a new way of experiencing the world.

What We Learned and the Virtues of Our Enterprise

In the end, we learned a great deal. In reflecting, one truly comes to understand the richness of our university life. Our project all began with a simple question: "What are we doing to commemorate the 500th anniversary of the Reformation?" The answer to that question was the creation of a rich tapestry of reflection and interpretation, of art and music, of law and religion, of career discernment and cinematic presentation, all seeking to answer how an event begun 500 years ago continues to affect our world.

It is a reminder that there are rarely simple answers to complex questions, nor can history be reduced to cause and effect. The world we live in is more complicated, the issues we deal with are more nuanced. For that reason, institutions of higher education exist to prepare us to think critically, to probe deeply, and to resist the temptation toward facile simplicity. In exploring the question How has the Reformation affected our world? AU demonstrated the powerful way a university community can expand our thinking, challenge our understanding, and ultimately reveal the gift that is a higher education.