Throughout the morning of February 23, the sound of a siren periodically cut through the typical chatter in the Mary Graydon Center as middle school students navigated a maze of lasers.

"Watch your back leg very closely!" "It's your hair, put it on top of your head!" spectators called out when an errant limb or ponytail touched a laser, setting off the alarm. The maze was one of five activities at the Optics Olympiad, a daylong event designed to help 150 DC middle schoolers explore physics.

"We're trying to get middle school students interested in science—seeing it as fun, but also something practical that can be applied to things in their own lives," said Gregory Harry, an AU physics professor. "We try to make it educational, but we really aim for fun."

This year marked the second year of the event, the outreach portion of a National Science Foundation grant. Harry said he modeled it after a program he enjoyed as a high school student in Colorado, though discussions with local teachers led his team to target middle schoolers.

"Middle school is where a lot of students decide their path," Harry said. "Just getting them interested in science and making it fun, that can have a much bigger impact than teaching a bunch of high school students who are already interested." 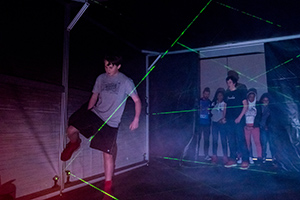 The students spent the morning participating in demonstrations of a number of concepts, including how light transmits through different materials, how light behaves as a wave, the way our eyes perceive colors, and Harry's "pièce de résistance": the laser maze. In the afternoon, students had the opportunity to show off what they learned through a quiz game.

The Olympiad is representative of AU's position as a student-centered research university, said Lisa Leff, acting dean of the College of Arts and Sciences.

"As we grow our sciences, we also want to stay true to our AU identity of the importance of undergraduates and the importance of excellent research faculty interacting with students," Leff said. "That's what I want to communicate to these middle schoolers—what's cool about college science is you get to work with faculty who have contributed to a Nobel prize."

Leff was referring to the research portion of the grant, which involves AU scientists working with the Laser Interferometer Gravitational-Wave Observatory (LIGO). The LIGO team operates two interferometers—one in Hanford, Washington, and one in Livingston, Louisiana—to detect gravitational waves, and its founders were awarded the 2017 Nobel Prize in Physics.

Maya Kinley-Hanlon, a senior physics major who has worked in Harry's lab for four years, was on hand to help guide students through the demonstrations. Kinley-Hanlon said she would have loved an event like the Olympiad as a budding scientist.

"I always liked science but definitely noticed how there seems to be a really stereotypical view of what a scientist looks like, and it's pretty narrow," she said. "I always had supportive mentors who told me to stay in it. Now I'm on the other end and trying to get people excited and do what others did for me."

The Optics Olympiad has grown in its second year to involve six schools, three more than in 2017. Harry is encouraged by this year's additional funding and will be glad to see the event continue. 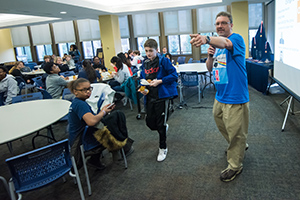 "My hope is to have more and more non-NSF funding, so it can continue past the length of the grant," he said. "We do have a couple other funders this year. More schools, more funding, more students—it's off to a good start."

Kinley-Hanlon, who spoke with palpable excitement about contributing to the Nobel-winning LIGO project, plans to attend graduate school next year. She hopes the Optics Olympiad sparks a similar love of science in the young attendees.

"I want the kids to come away thinking, 'That was really cool,' so when they're doing the math and the pen and paper side of it in class, they remember," she said. "A lot of people can get bogged down or intimidated by the math you have to do in order to do science, and it shouldn't be that way. It should be fun."