American University is committed to building and operating spaces that are environmentally friendly and healthy spaces.

American University is committed to building and operating spaces that are conducive to living, working, and learning and are environmentally friendly and healthy spaces. Green buildings reduce their environmental impact through energy and water efficiency, low-impact and healthy building materials, and sustainable operations and maintenance procedures.

AU adopted a Green Building Policy which outlines the university's commitment to a minimum of LEED Gold certification for all new construction projects and to manage all campus building to LEED Existing Buildings: Operations and Maintenance standards.

View AU's project scorecards for an overview of the LEED building's on campus.

The energy used to heat, cool, and ventilate buildings is the single largest contributor of greenhouse gas (GHG) emissions in the atmosphere. AU recognizes the importance of energy efficiency and conservation in reducing the university's contribution to climate change and is committed to reducing GHG emissions. The AU Facilities Management team utilizes tools such as Portfolio Manager and Lucid to track and adjust campus energy usage around the clock. In addition, the university files an annual report with Washington DC's Department of Energy & Environment (DOEE) with all energy and water consumption information for campus buildings. The District of Columbia has a citywide goal to cut energy use in half by 2032. Facilities Management uses this data to identify opportunities for energy conservation across campus. Students, faculty, and staff can do their part to reduce energy consumption by making some simple changes.

What the AU Community Can Do

Campus community members can participate in energy conservation by:

More than 2,150 solar photovoltaic panels were installed in 2011 on six American University buildings resulting in the largest solar power system in the District of Columbia. In addition, 174 solar thermal energy panels were installed on four campus buildings, providing hot showers to more than 2,000 students living on campus and hot water to the university's largest dining hall. Combined these 2,300 solar panels create the largest use of solar technology in the Washington Metro area and showcase how AU is finding innovative ways to fight climate change.

The solar thermal system converts sunlight into thermal energy, which is sent to a tank to provide solar heated water for showers and use by the AU community. The system pumps out 5,700,000 BTUs a day—609 megawatt hours of energy annually—equivalent to the amount of energy required to produce 20,795 cheeseburgers every year. According to the EPA, this solar hot water project is the largest in any city on the east coast. Skyline Innovations, a Washington, D.C.-based solar energy company, provides the system.

As a result of a combination of federal and local incentives, these solar installations actually reduce American University's energy bills. The projects are financed through power purchase agreements with Washington Gas Energy Services and Skyline Innovations, each of which owns and installs its respective system, and sells the resulting energy to American University through long term contracts for twenty and ten years respectively.

See how much electricity the solar panels on SIS produce in real time by visiting the dashboard for the array.

As of 2016, AU sourced 50 percent of its campus electricity consumption from the Capital Partners Solar Project in North Carolina. The project, a collaboration between American University, George Washington University, and George Washington University Hospital, is the largest PV development east of the Mississippi. The 123 million kilowatt hours (kWh) generated by the solar panels is enough to power 8,200 homes annually and will eliminate 60,000 metric tons of carbon dioxide emissions per year.

The Capital Partners Solar Project was major solar power deal to bring green energy to the campuses of the George Washington University, American University (AU) and the George Washington University Hospital (GWUH). The 20-year agreement with Duke Energy Renewables taps into solar power from North Carolina to meet half of each university's and about one-third of the hospital's electricity needs and reduce their carbon footprints. The completed three solar farms in North Carolina generate 123 million kilowatt-hours of emissions-free electricity.

When GW, AU and GW Hospital announced the agreement in June 2014, it was the largest non-utility solar power purchase agreement in the country.

Water used in daily activities such as cooking, hand washing, showering, and laundry all must be treated before being released back into the water system. This water treatment process is highly energy intensive. In fact, DC's wastewater treatment center, Blue Plains, is the city's single largest electricity consumer. Reducing the need for water treatment centers will reduce energy usage and thereby lower emissions in the District of Columbia.

Water conservation also helps AU reduce campus energy consumption. Students, faculty, and staff also can do their part to help conserve water and save energy. Enacting simple behavior changes such as turning off faucets between brushing teeth and rinsing, taking shorter showers, and reporting plumbing leaks immediately all can help save water and reduce energy use.

Green buildings are not just designed to be environmentally friendly, but also healthy for the people who spend time in the spaces. We are committed to providing indoor spaces that contribute positively to the health of our students, faculty, and staff.

American University receives frequent recognition for the beauty of its campus grounds. All 84 acres of the campus grounds is recognized as an accredited arboretum. But the landscaping is not only beautiful - it's also managed with environmentally responsible practices. Many of American University's grounds management practices help to decrease stormwater runoff from campus. The Washington, DC region is focused on managing stormwater to better protect the Chesapeake Bay from the harmful effects of pollution. On campus we are using many techniques to promote native and adaptive species, reduce the use of harmful chemicals, and reduce runoff. 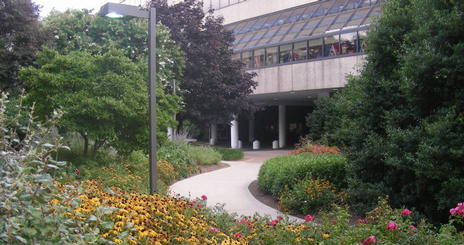 All 84 acres of the campus is recognized as an accredited arboretum.

100 percent of electricity is sourced from renewable energy.