Revolution is, by its very nature, a chaotic thing. And in surveying bygone eras, it is quite naturally the political ingredients of revolution that grab most of the historical headlines. But the seismic shock of revolution is never limited merely to governance—its tremors impact every segment of society.

On the 100th anniversary of the start of the Russian Revolution, the musical shock waves can still be heard—and they were explored on March 22 in a combination concert-lecture with Russian pianist Alexander Toradze.

The Carmel Institute of Russian Culture & History—in partnership with the PostClassical Ensemble—hosted the world-renowned keyboardist at the Katzen Arts Center.

During a fifty-plus-year career, Alexander Toradze has appeared with almost every leading orchestra in the world and recorded genre-defining versions of the works of major Russian composers. A graduate of Moscow's Tchaikovsky Conservatory—where he later taught— Mr. Toradze emigrated to the United States in 1983.

Following an introduction from Carmel Institute Director Anton Fedyashin, Mr. Toradze launched into Sergei Prokofiev's Piano Sonata No. 7. Premiered in January of 1943 by Sviatoslav Richter, the sonata—which is sometimes referred to as "The Stalingrad"—is the second of Prokofiev's three "War Sonatas".

The Battle of Stalingrad—one of the fiercest and bloodiest of World War II—raged from August 1942 to February 1943. Alternately dissonant, violently clamorous, and ominously foreboding, the Piano Sonata No. 7 may impress listeners as a direct artistic reflection of that conflict's savage physical destruction. 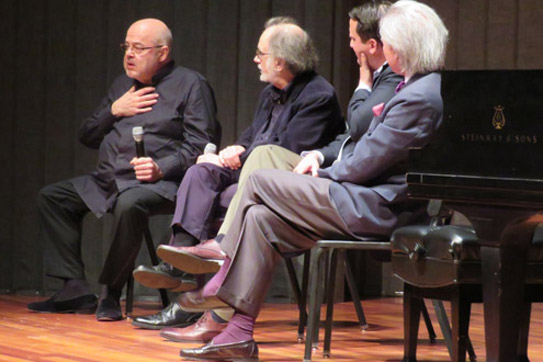 After an adrenaline-charged performance of the sonata, Mr. Toradze left the keyboard to join in conversation with Carmel Institute Director Anton Fedyashin, and Angel Gil-Ordóñez and Joe Horowitz of the PostClassical Ensemble.

The panel first discussed the place of Sergei Prokofiev (1891-1953) in Soviet music, his impact on Mr. Toradze, and the layers of meaning in the sonata. When asked by Joseph Horowitz what he heard in the Sonata No. 7 beyond simply the music itself, Mr. Toradze's reply was marked by a long pause. "I don't know where to start," he said.

Mr. Toradze's father—a composer who sometimes played piano in hotels to make ends meet—had a profound influence upon his relation to the music of Prokofiev. He was introduced to Prokofiev's works before many of the world's other great composers, said Mr. Toradze.

After contrasting a selection of Prokofiev's other piano and symphonic compositions with the Sonata No. 7, Mr. Toradze noted that the modernist-iconoclast elements of Prokofiev can overshadow the true lyricism of much of his oeuvre.

He stressed the necessity of familiarity with a composer's entire canon in order to ensure an informed interpretation, particularly for a performer. Sharing the opinion of his father with the audience, Mr. Toradze declared, "Prokofiev has not written one note…without being [a] genius."

The discussion then turned to another great Russian composer of the wartime and Soviet era, Dmitri Shostakovich (1906-1975). Mr. Toradze referred specifically to the Piano Concerto No. 1, which he performed with the PostClassical Ensemble on March 25 at Harman Hall. He noted—and then demonstrated—some of its technicalities, and the reality that jazz and other popular music forms also influenced Shostakovich.

Indeed, American jazz can be credited as exerting a strong musical influence upon the Soviet Union, especially during the Cold War period. Mr. Toradze recollected his memories of Voice of America radio producer and personality Willis Conover. The nightly jazz broadcasts of Conover not only preserved and stimulated interest in the uniquely American jazz genre, the slow cadence of his on-air delivery also made his English easier to understand for Soviet listeners.

"The crazy way you play the piano is partly influenced by the experience of American jazz, which you absorbed in Moscow as a Soviet artist, right?" asked Mr. Horowitz. "Very much so!" Mr. Toradze exclaimed.

Audience members posed their own questions to Mr. Toradze before adjourning to the Kreeger Lobby for refreshments.

AU students Katja Harper and Amanda Hodes—who both took part in the Carmel Institute's "Musical Russia" trip during the summer of 2016 led by Dr. Anton Fedyashin and Dr. Anita Kondoyanidi—appreciated the insights of Mr. Tordaze's concert-lecture.

Ms. Hodes ('19)—a sophomore music major who plays classical guitar—was particularly interested in Sviatoslav Richter, the premiere pianist for Prokofiev's Piano Sonata No. 7. Drs. Fedyashin and Kondoyanidi took the students to Richter's home during the "Musical Russia" tour. "For me, as a music major, that was a very incredible experience," she said. Speaking of Mr. Toradze's lecture-concert, she felt that "it's really great, because now I've got an experience with the composers, but also the performers, and I think that's a really interesting take."

During the audience question and answer session, Ms. Hodes asked Mr. Toradze about the influence of Modest Mussorgsky upon Shostakovich, "which I'm really interested in, because Mussorgsky's legacy is oriented around his early Realist period with 'The Big Five' Russian composers," she said.

"But recently there's been some unearthing, and people have been very interested in his later period, when he sort of became more lyrical and subjective. So I wanted to understand how Mussorgsky influenced Shostakovich—was it his earlier or his later period that influenced the composer? His answer was really interesting to me," Ms. Hodes shared.

Ms. Harper—a graduate student pursuing a certificate in Russian translation—saw a connection between music and language. On the "Musical Russia" trip, Harper said, she "learned a lot more about Russian music than I had ever really anticipated learning…this sort of got me into going to more of these events, and learning more about Russian music, which is something that I hadn't really studied before in my language studies."

This cultural insight will, Ms. Harper thinks, impact her translation studies and work. "Russia has a very musical culture, and I think in order to really understand a language—and understand it beyond just literal translation—it's very helpful to have a bigger understanding of the culture," she observed. "And I can see a lot of Russian culture in the music, and in the language as well—just the way they speak is different from the way we would express things, and their music expresses maybe similar things, but definitely in a different way than American culture does."

"He's a unique artist," said PostClassical Ensemble Executive Director Joe Horowitz, a music historian and longtime friend of Mr. Toradze. "…what he has to say, ultimately, is unusual and thoughtful." Touching upon the topic of cultural diplomacy, Mr. Horowitz said, "It's a big topic right now, at this very moment, for reasons that are, I think, so evident…and I hope that it's possible for the State Department and other interested parties to remember the importance that cultural diplomacy once played when relations were strained between the Soviet Union and the United States."

Mr. Toradze agreed. "We do what we can," he said, referring to examples of cultural diplomacy during the Cold War. "They always found some point [of agreement]. During the Brezhnev [era], it was Soyuz-Apollo friendship…many instances of mutual need; respect. In my opinion, the U.S. and Russia need each other now more than ever."

Photos from the concert-lecture by Alexander Toradze can be viewed on the Carmel Institute of Russian Culture & History Facebook page.