Leo Tolstoy would doubtless agree with this enigmatic observation from one of his most famous fictional creations, Count Alexei Kirillovich Vronsky. But the words are nowhere to be found in the novel Anna Karenina. They are instead spoken by Count Vronsky in Anna Karenina: Vronsky’s Story, a new film by renowned Russian director—and General Director of Mosfilm, Russia’s legendary studio—Karen Shakhnazarov.

Set in the decades following the original events of Tolstoy’s novel, Vronsky’s Story hinges on a chance encounter at a Russian military hospital in 1904, during the Russo-Japanese War. The hospital’s chief surgeon, Sergey Karenin, learns that wounded officer Count Vronsky is the same man who once had a doomed love affair with his mother, Anna Karenina. Karenin must know: What pushed his mother to the edge of her senses, and the ultimate decision of suicide? Vronsky agrees—at first, hesitatingly—to share his side of the story with her son.

Before the film, guests enjoyed a sumptuous candlelit buffet of Russian delicacies and holiday drinks—including hot cider with gingerbread sticks—all set in a snowy winter scene with a red-carpet arrival and picture backdrops featuring scenes from the movie.

“We are very grateful to Karen Shaknazarov for his support of the Carmel Institute,” said Institute founder Susan Carmel. “The ability to share Russian cinema with our students and others ‎is an invaluable tool for teaching Russian history and culture in an authentic and more accurate way. Anna Karenina: Vronsky's Story is a brilliant and stunningly beautiful film, and I am delighted that we could premiere it at the Russian Embassy's Tunlaw Theater.”

As guests took their seats in the theater, they were greeted by the Russian Embassy’s Cultural Attaché, Daria Anisimova. Ms. Anisimova noted that Leo Tolstoy is perhaps the best-known Russian writer in the United States. He experienced a massive surge of popularity during the 1880s-1890s, when everyday Americans sent Tolstoy thousands of letters. Famous U.S. writers, journalists, and politicians—as well as ordinary students—made pilgrimages to Russia to meet this “God of Russian literature”, as they had dubbed him. “We are proud of Leo Tolstoy’s valuable contribution to world civilization,” Ms. Anisimova said.

She then delivered a brief eulogy for Dr. James Hadley Billington, the U.S. Librarian of Congress Emeritus, who passed away on November 20. “Last week, Russia lost a very good friend—one that understood and loved our country,” Ms. Anisimova stated. “A man that strongly believed that cultural exchange is the key to mutual understanding and better relations. He earned a deep respect and authority amongst Russians—and these days, we mourn together with Americans.” 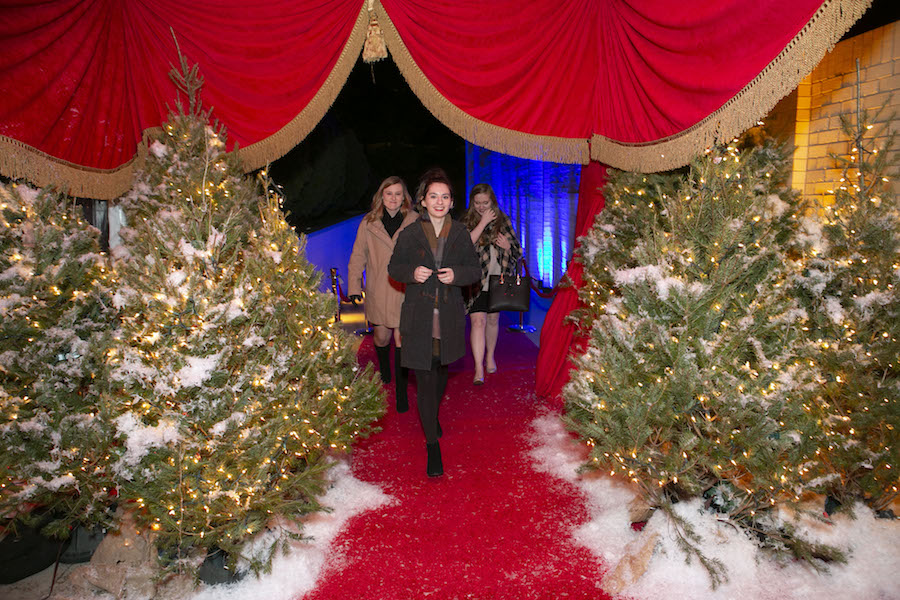 Dr. Anton Fedyashin—Director of the Carmel Institute of Russian Culture & History—added to Ms. Anisimova’s remembrance of Dr. Billington. “The United States, last week, lost a remarkable scholar, a great American, and a distinguished citizen of the world,” said Dr. Fedyashin. “He was a great friend of the Carmel Institute, and when Susan Carmel founded this program—seven years ago now—the inaugural event was at the Library of Congress.”

A video tribute to Dr. Billington followed. In it, Dr. Billington was heard to assert that, “History is about people. It’s not about anything else; it’s about people. And it’s the stories they tell you. Because they get inside you and affect you—that’s affect… What stays with you is only what affects you, and gets inside you… History is about people; not about abstract theories, or about abstract concepts… It’s about extending yourself into the lives of others.”

Afterward, the audience observed a moment of silence.

“I did some research this week and according to my calculations, this is the sixteenth version of Anna Karenina that has been made since the first one came out in France, in 1911,” Dr. Fedyashin shared. “It’s not up to me to tell you anything about the different merits of the different versions. Film is art, and art is a subjective thing—so some of you may prefer Sophie Marceau, or Greta Garbo, or Keira Knightley. But what we can say for sure is that the fact that directors return to this book over and over again is a testament to Tolstoy’s genius.”

“Good evening, ladies and gentlemen!” said Karen Shakhnazarov. “Welcome, and thank you for coming to see my film, Anna Karenina: Vronsky’s Story. This film was based on the novel of Leo Tolstoy, which was first published 140 years ago—and the way I see it, nothing better has ever been written about the relationships between men and women. These relationships lie at the heart of our lives. Everything else—politics; arts—is secondary.

“The film was an attempt to preserve the story in a new perspective, and at the same time, we were extremely careful to follow the original text and keep the plot and dialect unchanged. I am sure that culture—be it literature, music, or cinema—is the universal language which spans distances and differences and promotes understanding and respect between nations.

“Hopefully, this screening can be a step towards developing friendlier relations between the Americans and the Russians and building interest in the Russian culture in the United States. I am profoundly grateful to Mrs. Susan Carmel Lehrman for her initiative and generous support, which have made this screening happen… I am very proud that I had the chance to talk with you, and so, I hope that the film will touch your heart. I am very excited—and for me, it’s a very important event in my life to be before you. Thank you very much—and good luck for all of you.”

Anna Karenina: Vronsky’s Story is a recollection. Told in flashbacks, it enables viewers unfamiliar with Tolstoy’s book to still follow the plot of the original novel. Nonetheless, a fresh and succinct summary can be found in Viv Groskop’s delightful book The Anna Karenina Fix: Life Lessons from Russian Literature (2018; Penguin Books):

Anna Arkadyevna Karenina is the wife of Alexei Alexandrovich Karenin, a government minister. She is a woman in her mid to late twenties. Her husband is two decades older. She is bored and disillusioned with her life. She finds herself drawn to an extremely attractive young officer called Vronsky, who is not a particularly unpleasant person but does not have much more than his looks to recommend him. Their love affair is passionate and tender but, ultimately, Anna cannot enjoy it because she feels guilty, not so much because of her irritating husband, Karenin, but because of her maternal responsibilities to her young son, Seryozha, whom she loves very much. In the moment that she decides to divorce Karenin and risk no longer being a part of her child’s life, she loses her nerve and disappears under the wheels of a train.

While certainly still carrying its own complications and censures, an extramarital affair is perhaps not the contemporary social dynamite it was in the era of Tolstoy and Anna. And yet, the capacity for human passion and cruelty within a relationship remains identical.

It is difficult to shake the vague and unsettling feeling, as the audience watches a trio of lives unravel, that human connections are fragile things. As Tolstoy observed in the first sentence of Anna Karenina—one of the most famous opening lines in literature—“Happy families are all alike; every unhappy family is unhappy in its own way.”

In the end, the audience is left to wonder: Did Anna simply die, or did she escape the claustrophobic confines of her society and two doomed relationships?

Vronsky earlier recounted to her son that he saw Anna’s corpse at the train station after her suicide. While her body was mangled, her face was intact—and in her eyes was a look not of pain or suffering, but of triumph.

However: “Perhaps I was wrong at the station,” Vronsky says. “Maybe it wasn’t Anna. Sometimes I think that she’s still alive. She just went somewhere and doesn’t want to come back.” A shocked Sergey Karenin stammers, “What are you saying? There was a funeral. She was buried a long time ago.” To which Vronsky replies, “To hell with the funeral! They always wanted to rid themselves of her.”

The doubt Vronsky introduces seems philosophical, but a question lingers—and thus, there is no tidy resolution so typical of the romance film genre. But then, in Tolstoy, tidy resolutions are as rare as those happy families the author invokes in the opening of the novel.

After the film, a delicious buffet of desserts was served.

Several guests offered their opinions of the movie.

“Anna Karenina: Vronsky’s Story was a beautifully told and presented film that captured the characters and the period well; offering the viewer a window onto a bygone era with its lush settings and exquisite costumes,” said John Hanshaw, Director of the Washington Film Institute.

Martin Huberman—President of VideoArt Productions, whose clients include GE and the National Gallery of Art—said, “The food and drinks and the décor were all sensational. And the film—wow! What a beautiful story, with just incredible poignant actors and some incredible directing. There are a couple of long one-take shots at the field hospital that are simply masterpieces.”

Emma Rowe—a senior who also attends AU—found the film poignant. “Compared to American movies, I thought that it had a lot more of a tragic ending,” she said. “I feel like a lot of times, in American movies like that, they end happily. I liked how it’s kind of an unpredictable ending. I really liked it overall—really intense; very dramatic.”

“I thought the movie was extremely well done,” said Patrick Czerwony, who studies at American University’s Kogod School of Business. “I think it was a great story to tell… to really explain the culture of Russia during that time, and I really enjoyed it.”

“I’m originally from Russia,” said Slaviana Kozhukhova, a senior at AU. “So I read the whole story from Tolstoy… in the original story, it was kind of different…and also Anna Karenina was more upset about the society’s expectations of her.”

Before heading out into the chilly Washington night reminiscent of a Russian winter, guests received a tin of tasty Russian chocolates.

Photos from the film screening can be viewed on the Carmel Institute of Russian Culture & History Facebook page.