In December of 2022, the Carmel Institute sponsored a class trip to Istanbul for a group of students from American, Georgetown, and George Washington Universities. It explored the legacy of Byzantium and Byzantine Orthodoxy on Russia and Eurasia.

Before departing the US, the students read selections from Bettany Hughes' Istanbul: A Tale of Three Cities as a general introduction to the history of the Byzantine Empire and Constantinople. The class combined discussions of the book with visits to churches, museums, mosques, art galleries, and archaeological sites in Istanbul. In the process, students explored the history of the Byzantine Empire, the evolution of Eastern Orthodoxy, and interconfessional relations throughout medieval and modern history. Dr. Onur Isci of Bilkent University in Ankara also joined the group on select museum visits, guided some of the tours, participated in discussions, and gladly answered many questions while touring Istanbul.

Carmel Institute director and professor of history Anton Fedyashin guided the students through museums and urban explorations, and led daily discussions based on the readings. In the process, the students learned to contextualize written texts through museum exhibitions, artistic representations, religious symbolism, and archaeological interpretations. The urban tours related architectural styles to religious, philosophical, and artistic trends. The class also introduced students to the impact of deep cultural structures on spiritual and visual expressions of medieval and early modern societies. 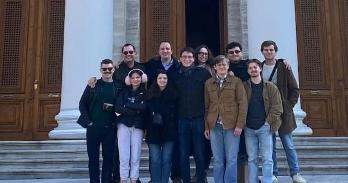 On the first full day of the trip, Dr. Fedyashin gave the students a tour of the Istanbul Archaeological Museum as an introduction to geopolitics and history of the classical civilizations that established the colony town of Byzantium and influenced its evolution towards Constantinople. Exploring the artistic styles that dominated the Eastern Mediterranean region from the Archaic to the early Byzantine periods, the group discussed the literary, philosophical, and geopolitical trends leading up to the split between the Western and Eastern Roman Empires. The students also reflected on the intellectual and spiritual legacy of the classical world that the Christian world would inherit, coopt and, in some cases, suppress. After lunch, the group visited a remarkable marvel of early Byzantine engineering, the fifth-century Basilica Cistern, and discussed the important contribution of Roman engineering to the development of Eurasian and Mediterranean civilizations. Touring the museums and the city on the way there and back, the group walked almost ten miles on the first day. The group started the second day with a tour of the official residence of the Ottoman sultans, the Topkapi Palace Museum, and the oldest standing Orthodox church in Istanbul on the premises of the complex, Hagia Irene. After lunch and a discussion of the fall of Constantinople to the Ottomans in 1453, the group proceeded to tour the classical and medieval world’s largest Orthodox cathedral, the Hagia Sophia. Turned back into a functioning mosque recently, it remains open to tourists between prayer times. Even though it is 1,500 years old, its sheer size and beauty continue to stun. The group then walked across Sultan Ahmed Park to visit the Sultan Ahmed Mosque, often called the Blue Mosque for the stunning white-and-blue tiles that adorn its interior. Over dinner, the group discussed Hughes’s chapters about the building of Hagia Sophia and the fall of Constantinople. 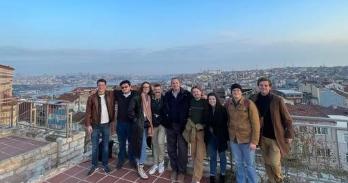 The third day began with a visit to the Tekfur Palace, which stood along the Theodosian Wall of Constantinople. The wall and adjacent imperial palace marked Constantinople’s periphery in 1453, when the Ottoman army attacked the Byzantine capital. Dr. Fedyashin gave the students a tour of the site where the last Byzantine Emperor Constantine XI is said to have taken leave of his family and court for the last time before joining his capital’s defensive forces. Recently restored and reopened, the Tekfur Palace offers spectacular views from its rooftops upon the extent of the city as it was in the fifteenth century. The group walked along the remaining section of the wall with a stop to see one of the rare monuments of Byzantine architecture, the Chora Church. After lunch, the group continued their three-hour walk back to the historic district. It passed under the Valentinian Aqueduct, a marvel of Byzantine engineering, and visited several historic mosques designed by renowned Ottoman architect Mimar Sinan.

The group began the fourth day with a tour of the remnants of the ancient hippodrome with its three remaining historic columns and then proceeded to explore the Museum of Turkish and Islamic Arts. After a quick stop for Turkish tea and coffee, Dr. Fedyashin gave the students a tour of the Grand Palace Mosaic Museum. Nestled in the Fatih District, this small gem contains the fifth-century mosaics from what archaeologists believe was the peristyle of an academy on the premises of the palace. The mosaics gave the students a rare insight into Byzantine decorative arts. After lunch, the group proceeded to explore Istanbul’s historic Grand Bazaar.

The fifth day began with a visit to the Pera Museum to explore historical portraits of Ottoman ambassadors to European countries and European ambassadors to the Sublime Porte. The Pera Museum also contains contemporary European and Turkish art and photography, which gave context to the historical explorations that the students had been doing for several days. From there, the group returned to the fifteenth century by mounting the historic Venetian-built Galata Tower. And after lunch, Dr. Isci took the students to The Museum of Innocence where he gave a brief lecture about the Nobel-prize-winning contemporary author Orhan Pamuk. Dr. Isci then guided the group through the museum created around Pamuk’s novel The Museum of Innocence, which the students read before coming on the trip. 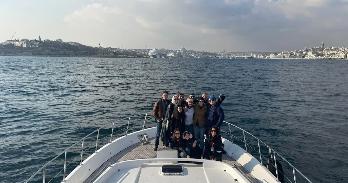 The group started the sixth day with a boat tour of the Bosporus Strait to see the historic palaces, lodges, and summer residences of the Ottoman Period. One of the tour’s highlights is the Rumeli Fortress or Rumelihisarı, built on the orders of Sultan Mehmet II before his conquest of Constantinople in 1453. Returning to the European side of Istanbul, the group then took the city ferry to the Kadiköy district to explore the history and architecture of the Asian side with Dr. Onur Isci as guide.

Since the students’ flight did not leave until late afternoon of the seventh day, Dr. Fedyashin took the group on an extensive morning tour of Dolmabahçe Palace, the European-style residence of the last Ottoman sultans, and the site where Atatürk died in November of 1938. After that, the group made its way to the airport for their long journey to Washington, DC. 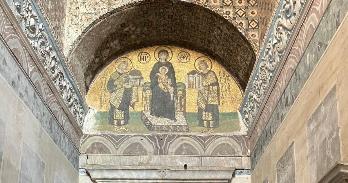