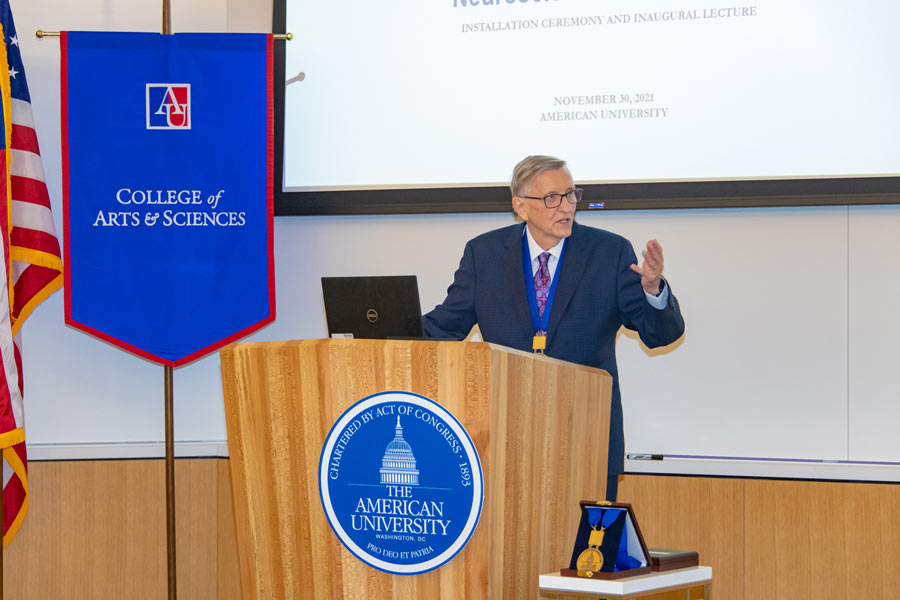 On November 30, Distinguished Professor of Neuroscience Terry Davidson was installed as the Trone Family Eminent Scholar Chair in Neuroscience and Behavior. He is the very first eminent scholar chair at AU, and his position is made possible by a $5 million gift from AU Board of Trustees member Congressman David Trone and his wife, June, through the David and June Trone Family Foundation.

As chair of AU’s new Department of Neuroscience, which was established last spring, and director of AU’s Center for Neuroscience and Behavior, Davidson leads groundbreaking research poised to transform our understanding of and approach to treating addiction and other cognitive disorders. His team’s cross-disciplinary research on the influence of diet and susceptibility to addiction addresses a root cause of drug abuse by linking both drug abuse and overeating to cognitive, rather than motivational, control impairments.

Read on for more news about the groundbreaking neuroscience research being conducted under Davidson’s leadership. 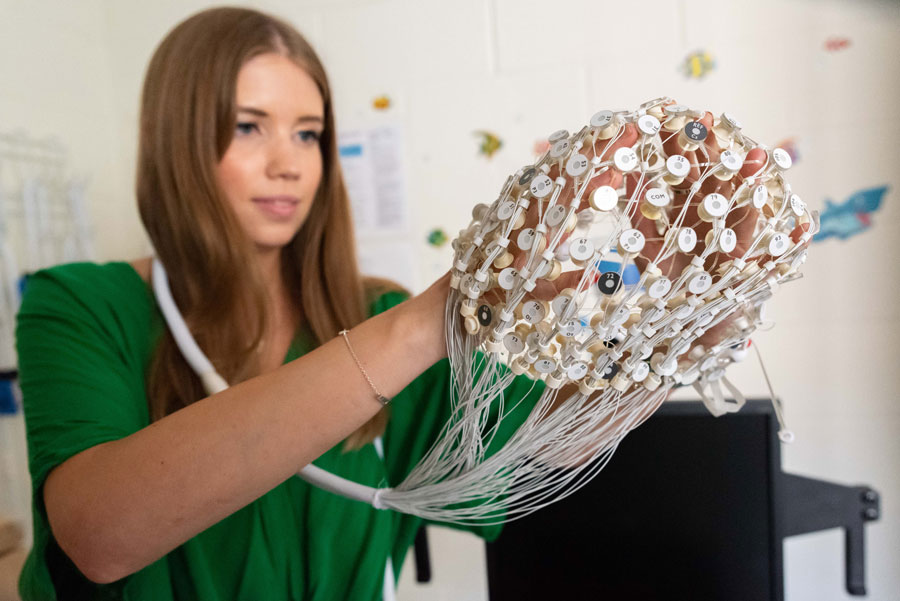 In his new Hall of Science laboratory, Davidson is continuing groundbreaking work to advance understanding of how certain foods and drugs promote brain changes that can result in obesity and addiction. Collaborative research with Professor Richard Stevenson of Macquarie University, a world-renowned expert on diet and the controls of eating by humans, has confirmed that key diet-induced memory impairments that were identified in Davidson’s “Vicious-Cycle Model of Obesity and Cognitive Decline” are also observed in young adult college students. Based on their joint findings, Davidson and Stevenson submitted an invited review of their work to appear in the journal Reviews in Endocrine and Metabolic Disorders early next year.

Findings obtained in collaboration with Jack Yanovski, chief, Section on Growth and Obesity at National Institutes of Health (NIH) and with AU Professors Stacey Snelling (Department of Health Studies) and Sarah Irvine Belson (School of Education), provided evidence that the threat posed by obesity to cognitive functioning can be observed in children ages 8-12, as predicted by Davidson’s model. This work has received favorable reviews and will appear in the International Journal of Obesity in 2022.

Finally, collaborative research with AU Professor of Neuroscience Anthony Riley has provided initial evidence that same brain changes identified in Davidson’s model as producing excess food intake leading to obesity may also underlie loss of control of drug intake in addiction. Based on their joint efforts, Professors Davidson and Riley have been invited to contribute a chapter to the upcoming Handbook of Food and Addiction that is published biennially by the Oxford University Press.

The lab of Neuroscience Professor Mark Laubach and collaborators at Washington University in St. Louis received a $648,138 grant from the National Science Foundation (NSF) to support the OpenBehavior project. The project has created a database of open source tools used for neuroscience research and a repository of video recordings of animals engaged in standard behavioral tasks used in neuroscience research. In addition, the team is working with researchers around the world on establishing guidelines for the use of video analysis methods, especially those using deep learning methods, and will be offering training workshops on using open source tools at the annual Society for Neuroscience meeting. 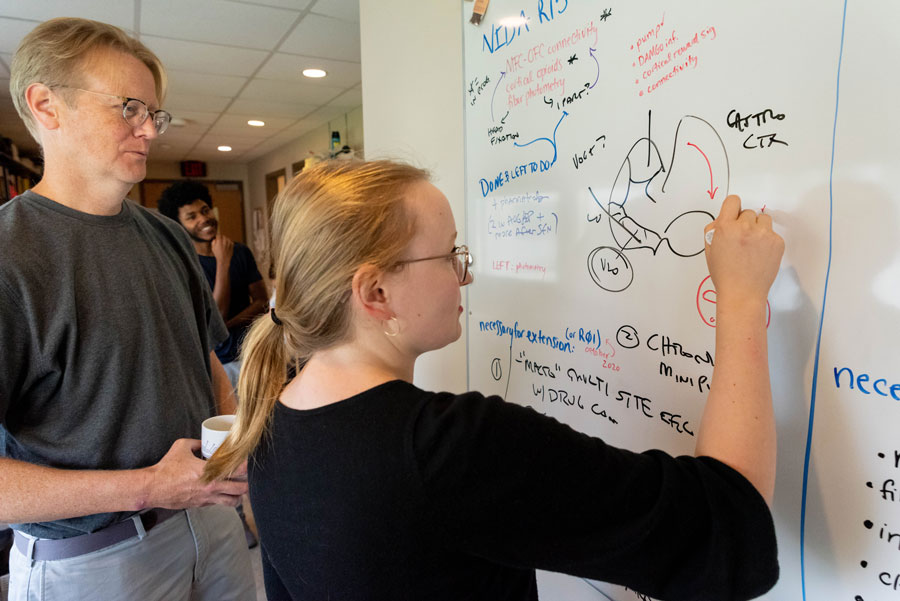 Mark Laubach also received a $50,000 pilot grant from the NIH-funded District of Columbia Center for AIDs Research (DC CFAR) to examine mechanisms of HIV-associated Neurocognitive Disorder (HAND) using a rodent model system. Laubach's lab is studying how toxins produced by HIV damage neural circuits in the prefrontal cortex and may lead to changes in brain signals associated with self-control. The team is also examining effects of anti-retroviral therapies on the prefrontal cortex.

Examining HIV and Drug Use for Treatment and Prevention

Professor of Neuroscience Anthony Riley has teamed up with Assistant Professor of Chemistry Alexander Zestos and received the District of Columbia Center for AIDs Research (DC CFAR) Pilot award to examine neurochemical and behavioral differences in HIV model mice. The award is intended to bring scientists from diverse background together to help study and understand HIV. Zestos and Riley will study neurocognitive impairment caused by HIV on drug use and abuse as measured in the EcoHIV mouse model. While the implications of drug use on HIV are well known, this work will be one of the first studies to examine the effects of HIV on drug use and abuse, which could potentially help identify novel treatments and prevention strategies. 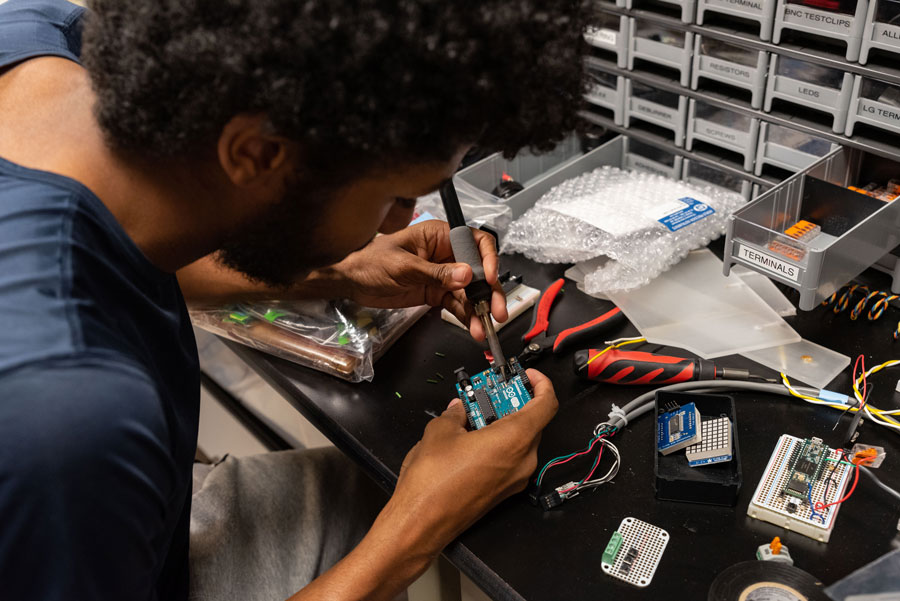 How do hormones affect memory?

Professor of Neuroscience Colin Saldanha’s latest research in collaboration with Associate Professor of Biology John Bracht is supported by a 1.5 million dollar grant from the National Science Foundation (NSF). Hormones travel through the blood and affect tissues far from their source. Neurons communicate with electrical signals, and talk to other neurons with synaptic connections. Saldanha and Bracht discovered a combination of these two signaling systems; the ability of individual synaptic connections to make estrogen, particularly in parts of the brain important in learning and memory. However, we do not know how exactly electrical signals affect hormone synthesis or vice versa. We also don’t understand how synaptic estrogen synthesis modulates learning and memory. Saldanha and Bracht will study how synaptic steroid synthesis interacts with electrical activity and neurotransmitter release. Then, they will ask how synaptic estrogen synthesis modulates learning, storage and recall of newly learned spatial information. Lastly, they will probe changes in the genome associated with learning, memory, and synaptic estrogen synthesis.