The Carmel Institute of Russian Culture and History paid homage to legendary American scholar James Billington last week at a packed symposium held at the Washington College of Law. The event brought together many of Billington's colleagues and contemporaries, as well as former senators and current representatives from the Embassy of the Russian Federation to the United States of America, to celebrate the 50th anniversary of Billington's groundbreaking book, The Icon and the Axe.

The book, first published in 1966 by Alfred A. Knoft is still in print today. It has been described by Library Journal as "a rich and readable introduction to the whole sweep of Russian cultural and intellectual history from Kievan times to the post-Khruschev era." 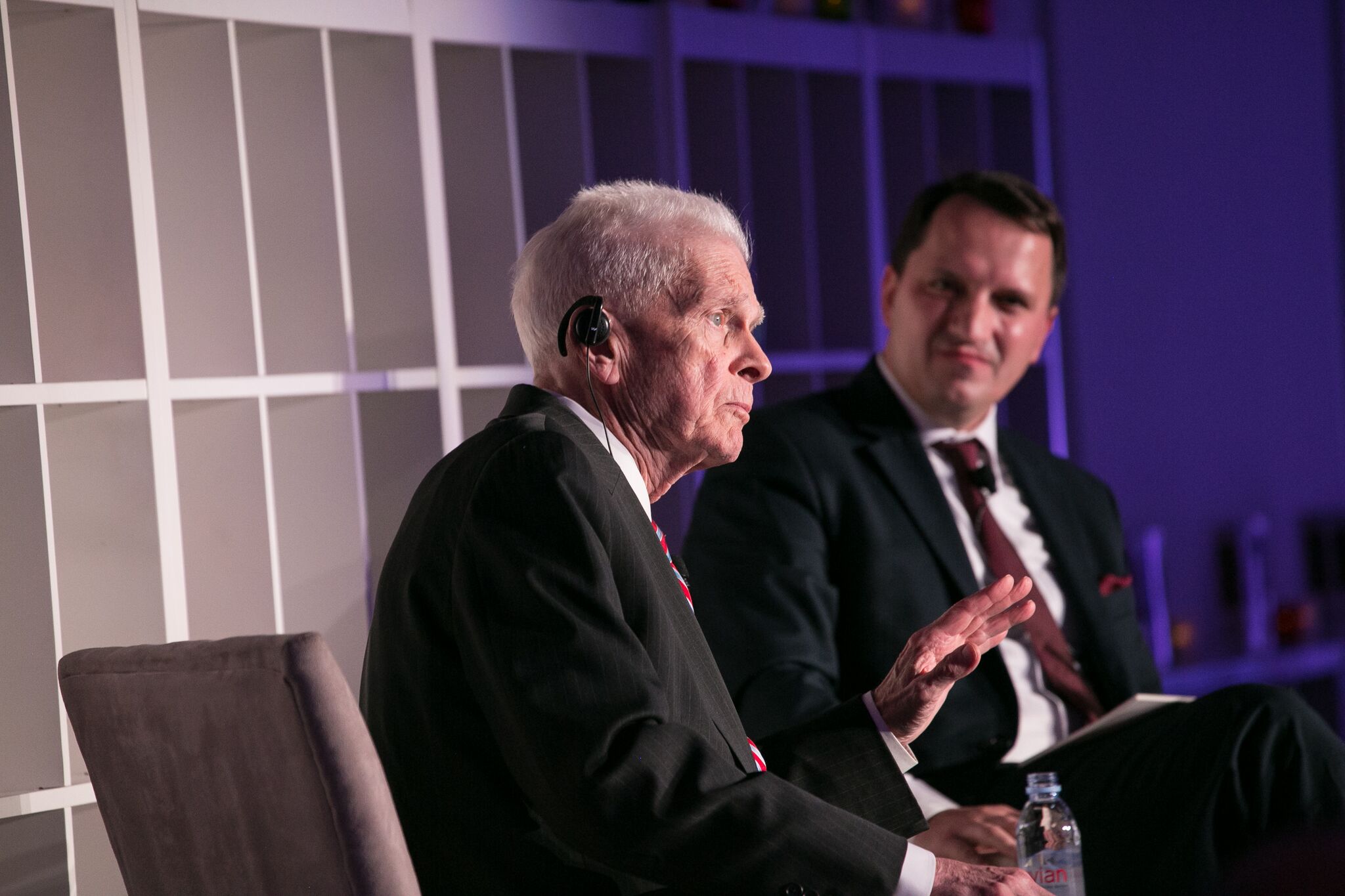 James Billington speaks to the crowd.

The Carmel Institute of Russian Culture and History

Carmel Institute Founder and Chair Susan Carmel opened the event with thoughtful insight into one of Billington's lessons. "I believe that we should follow his example to first unlock the love that is in our hearts, and then begin to read," she said. "As Dr. Billington has taught me, real change must come from the heart, and cultural understanding must include our hearts as well as our minds."

Institute Director Anton Fedyashin noted that "it must have taken courage to publish a book with two such un-modern words as 'icon' and 'axe' in its title during the secularizing 1960s that witnessed the great social turn in academia." He added that "great books, like wine do not grow sour with time." 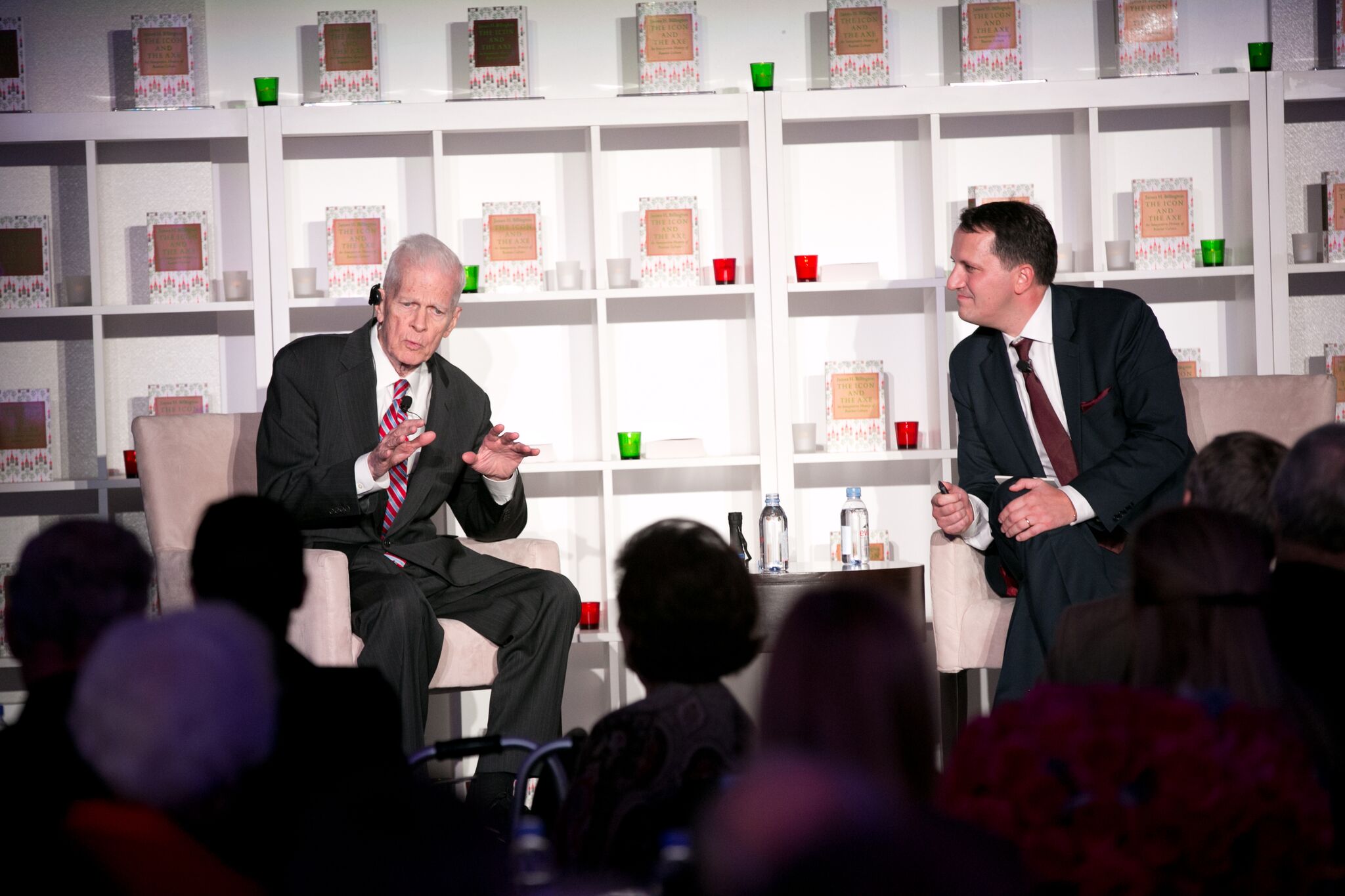 James Billington (left) and Anton Fedyashin (right) discuss The Icon and the Axe.

The Icon and the Axe

Billington wrote The Icon and the Axe as a way to increase cultural understanding. Even as a young man, he was fascinated by Russia, and his inspiration for writing The Icon and the Axe came from reading War and Peace as a child. It also drove him deep into academia and eventually to the Library of Congress in 1987, where he was deeply involved with President Ronald Reagan's trips to the then-USSR in the waning years of his presidency. Throughout his career, Billington always focused on Russian history, culture, and politics—as a professor of history at Princeton University, as a former Rhodes Scholar, as a guest lecturer on Russian history at the University of Leningrad, and as an exchange research professor at the University of Moscow.

Billington touched the lives of all the event's speakers, in both personal and professional ways. Carmel said, "Billington's work has been an inspiration to me." Other speakers recalled the kindness and generosity of the man they had known for several decades. One such attendee was former United States Ambassador to the Russian Federation John Beyrle, who praised how Billington digitized nearly 2,000 Russian literary works, media, and photographs so that citizens of the United States and Russia could access them free of charge through the UNESCO World Digital Library.

In the closing question-and-answer session, Billington spoke about his education, youth, and the current state of Russian-American relations. He ended the event by describing what has inspired him for all these years. "History is about people and the stories they tell you," he said. "They get inside you and affect you."