What do an Ohio farm, college rowing, a semi-professional oboist, and cancer biology research have in common?

It is Nicholas DeVito, a 2022 graduate from the College of Arts and Sciences with Honors in Biology.

Nick’s path to biology was not what you might expect. As a first-year student, he planned on majoring in international studies because of his love for foreign languages—he had studied Mandarin Chinese since third grade and wanted to make a career out of it since he was proficient by the end of high school. But throughout his first year he realized that language was the only part he liked about international studies, and maybe a typical nine-to-five job was not for him.

“I loved my science courses in high school and grew up working with my hands on a farm, so I always planned on minoring in biology,” Nick says. “But then I just jumped right in and switched my major to biology!”

When Nick took a cellular biology class with Dr. Katie DeCicco-Skinner, he found himself immersed in what he truly loved. He enjoyed Dr. DeCicco as a professor, and he asked if he could join her lab. Even though she said yes, COVID delayed his first day until junior year. He started helping with the multiple myeloma project that aims to determine and treat chemotherapeutic drug resistance at different body mass indexes. Nick’s honors thesis project focused on treating drug resistance with an additional drug to connect drug resistance to type 2 diabetes, with hopes that this will bring huge implications to cancer research. 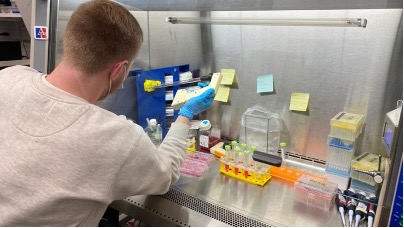 Even though Nick spent a lot of time in the lab, he kept himself busy in his free time. A typical day started at 4:12 a.m. so he could drive to the Anacostia River for crew practice from 5 a.m. to 7 a.m. Nick had never touched an oar before the first year. He grew up playing hockey for 15 years but did not want to play in college. He did not anticipate how much he would miss the team atmosphere hockey gave him. After attending an interest meeting and the first crew practice, he was hooked. He was elected crew vice president his sophomore and junior years and then served as the president/captain for his senior year. He oversaw many different aspects of the team and worked hard to keep the team running smoothly. Not only was he a great leader among his 28 teammates, but he rowed starboard in the men’s varsity four.

Nick would arrive at the DeCicco-Skinner lab around 10 a.m. where he did any number of experiments on a given day. He might have changed media on multiple myeloma or adipocyte cells, co-cultured multiple myeloma cells with adipocyte cells, and added the specific drug treatments, or maybe it was running protein on a western blot and imaging it. His honors project focused on analyzing the different protein concentrations to compare multi-drug resistance in multiple myeloma co-cultured with adipocytes at different body mass indexes, with hopes of establishing a relationship between diabetes and cancer treatment. 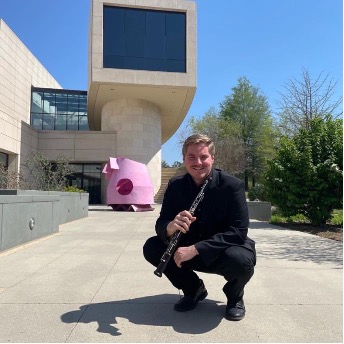 Nick wrapped up his experiments by around 5 p.m. every day, but his time on campus was not over yet. To make the most of his time under the umbrella of the College of Arts and Sciences, he walked across campus to Katzen Arts Center in the evening for orchestra or band practice from 8 p.m. to 10:30 p.m. Nick started playing the clarinet in fifth grade and became the best in his class and wanted to switch to a new instrument for a challenge. Since there were no bassoons in rural Ohio, he had to settle for the oboe when he got to seventh grade. In high school, Nick played for the Contemporary Youth Orchestra and toured across the country, while still playing for his school’s band. The oboe was not something he could just give up when he got to college, so he continued taking lessons in the AU Department of Music, where rose to principal oboe in the symphonic orchestra and band.

After graduation, he made a cross country move to San Francisco where he joined a breast cancer research laboratory and is working towards his master’s degree in Molecular and Cancer Biology at University of San Francisco.