Celiac disease (CD) is a systemic immune-mediated disorder triggered by gluten in genetically susceptible individuals. Gluten is a protein found in wheat, rye, and barley. CD was traditionally assumed to be chronic enteropathy affecting people of Western origin. Once considered a gastrointestinal disorder that mainly affects Europeans, CD is now known to affect persons of different ages, races, and ethnic groups. Females are slightly more affected than males. Recently, CD diagnosis has been emerging rapidly in Asian countries. However, globally, the majority of patients with CD are still underdiagnosed, and the prevalence is likely underestimated.

This work is an extension of a systematic literature review that was completed as an assignment for (HLTH 681) Research Methodology class under the guidance of my Professor Dr. Hawkins, who is also a co-author of this research project. In April 2018, I presented the findings at the World Rural Health Conference in New Delhi, India. As a physician who worked in clinical practice prior to coming to American to pursue my master's degree, I am interested in examining why Celiac disease is both misdiagnosed and underdiagnosed in Asian countries, contributing to its low prevalence.

CD is characterized by a broad range of clinical presentations and variable damage to the small intestinal mucosa. Clinical features of CD include diarrhea, weight loss, weight gain, flatulence, and abdominal distension. It may be manifested without gastrointestinal symptoms. Other manifestations include iron deficiency with or without anemia, abdominal pain, short stature, chronic fatigue, and reduced bone mineral density.

It has been assumed by clinicians that CD mainly occurs in Caucasians; however, the prevalence in other population might be underestimated. I conducted a systematic literature review using PubMed that included articles published from 2007 to 2017 including the terms CD, prevalence, South Asia. One hundred and sixteen papers were identified, and those meeting inclusion criteria were included (n=15). Review results show that CD is not confined to Europe and North America, but should be found with similar prevalence in South Asia. There are important factors contributing to the underdiagnosis of CD including atypical clinical presentation and a misconception that CD is a rare condition.

It was generally believed by physicians that CD is very rare in Asian countries. The iceberg model efficiently conceptualizes the prevalence of CD. The overall number of CD cases is the size of the iceberg, which is not influenced by the frequency of the predisposing genotype in the population, but also by the pattern of gluten consumption. Typical cases have gastrointestinal symptoms that make up the visible part of the Celiac iceberg. 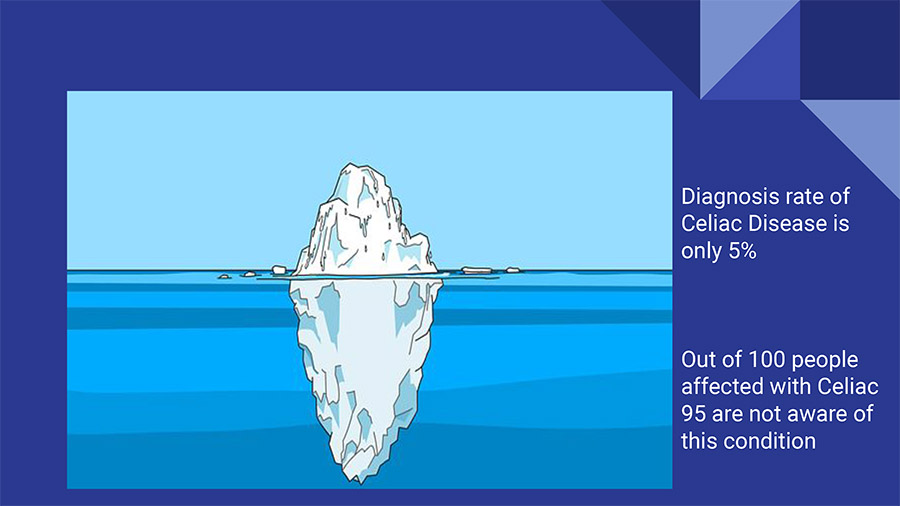 However, this has been refuted by large-scale screening in these regions where misdiagnosis could have been due to failure to recognize the early and mild pathological changes in intestinal biopsy samples. Most clinicians believe that CD is rare and also fail to acknowledge that many individuals with CD initially present with no gastrointestinal symptoms; in fact, the symptoms of CD can be easily overlapped with symptoms caused by other clinical situations (e.g. malabsorption syndrome) hence leading to not performing a test to confirm CD. It could also be due to the failure of the pathologist to recognize early features of CD.

There are histological mimickers of CD—like inflammatory bowel disease, tropical sprue, Whipple’s disease, radiation damage, and use of certain medications like non-steroidal anti-inflammatory drugs, which lead to further confusion in evaluating the disease.

The increase in the prevalence of CD in Southeast Asia is mainly secondary to an increase in awareness of the existence of this disorder. Quite a number of patients presented with features other than gastrointestinal manifestations to the physician (Type 1 diabetes, short stature, anemia, infertility). Increasing awareness among physicians is necessary for the accurate diagnosis and to estimate the true prevalence and its association with autoimmune diseases and diabetes.

There are diagnostic and clinical issues that require immediate attention by healthcare professionals, foremost an increased awareness of the disease, lack of diagnostic facilities, and non-availability of gluten-free products. It is also possible that the prevalence of CD is increasing in some developing nations because of the widespread diffusion of Western dietary habits, which increases the consumption of glutencontaining food products. We need to conduct much larger, well-designed studies to assess the true prevalence of CD in the Asian population.

In conclusion, CD can present with varied atypical manifestation, and increasing awareness amongst physicians is necessary for its diagnosis and to know its true prevalence. However, the incidence is expected to increase over the next few decades. Coordinated measures by government, medical, and agriculture research institutes would be justified to get exact prevalence and create more awareness about CD. A large number of potential patients will need additional healthcare resources. Thus, careful planning to provide the most cost-effective and regionally adapted care possible is essential.