"May you live in interesting times."
—Ancient Chinese Blessing 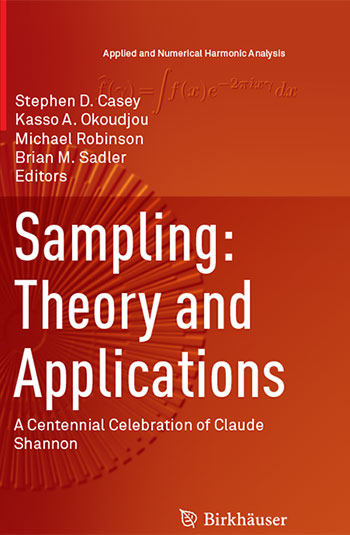 We live in interesting times. A blessing, and a curse. And more than ever, we rely on wireless communication to connect us. What, however, allows all the information that gets captured and sent on cell phones to get sent and then reconstructed all over the world? The answer is simple. Mathematics.

Imagine life without computers, cell phones, TVs, radios, computers, MRI scans, EKG and EEG scans, or GPS systems. All of these are built upon mathematics. They were created as "mathematical gadgets" long before the actual devices were developed. One of these key “mathematical gadgets” is the construction of signal sampling. This allows the content of a continuous piece of information — a phone conversation, a video captured on a camera phone, the sound of a community singing — to be translated into digital information — a set of numbers, which can be easily transmitted worldwide — and then reconstructed exactly by the person receiving the information. Sounds like magic, but it is actually just the mathematics of the Whittaker-Kotel'nikov-Shannon (WKS) Sampling Theorem. Sampling is a staple of anyone working to communicate information in our digital age. This is the mathematics of your cell phone.

Our "Age of Information" presents us with new challenges, and, in particular, with respect to signal, image, and information processing. We are in the time of ultra wideband (UWB) systems, such as miniature and hand-held devices for communications, robotics, and micro aerial vehicles, cognitive radio, radar, etc. We are also presented with the challenge of powering these and other systems. We also need to investigate adaptive frequency band (AFB), and develop systems that can communicate information more efficiently in terms of energy. Digital circuitry has provided dramatically enhanced digital signal processing operation speeds, but there has not been a corresponding dramatic energy capacity increase in batteries to operate these circuits; there is no Moore's Law for batteries. This is the next big problem for electronic mobility. Therefore it is essential to develop methods that allow us to work with low energy requirements for UWB and AFB systems, and correspondingly, the next generation of the Theory of Sampling.

In the middle of the Covid-19 epidemic, the publication of state-of-the art signal processing that is the backbone of wireless communication has just appeared. The publication is in the prestigious Applied and Numerical Harmonic Analysis Series, Springer Nature Switzerland. It is titled Sampling: Theory and Applications, A Centennial Celebration of Claude Shannon.

The book has deep roots in American University science. The lead editor, Stephen Casey, is a professor of Mathematics at AU. Michael Robinson, associate professor of mathematics is also an editor. Casey and Robinson are active in the signal processing community. Together, they have 46 external grants, 95 papers, and 6 patents. Casey had just finished a two-year appointment as department chair, and he was a visiting research professor at the Norbert Wiener Center at the University of Maryland (UMD) when COVID-19 hit. "I had just finished a lecture tying together Sampling Theory by Poisson, Cauchy, Jacobi, Shannon, Selberg, and Levin when both AU and UMD shut down. The last words I heard from my mentors at UMD were, 'Make sure that you write this up.'"

Mathematics as a Human Activity

A feature of mathematics that gets too easily overlooked is how human of an activity it is. The publication of Sampling: Theory and Applications tells a part of this story extremely well. During the writing of the book, Professor J. Rolland Higgins, one of the most senior members of the Sampling community had a bad accident and was hospitalized. This left his contributions to be polished by others – Professor Casey and Professor Maurice Dodson of Leeds. Professor Higgins passed away at the beginning of the crisis. Professors Casey and Dodson organized themselves around "virtual cups of tea." Cups of Barry’s Golden and Earl Grey allowed them to polish the brilliant Higgins essay on Shannon — Claude Shannon — American Genius — the lead article of the book — and the equally brilliant Dodson-Higgins chapter on Sampling Theory in a Fourier Algebra Setting. They then wrote a carefully worded letter to the publisher, asking that they be allowed to include a testimonial to their friend J. Rowland Higgins. It appears in the preface of the book.

SampTA (Sampling Theory and Applications) is a biennial interdisciplinary international conference for mathematicians, engineers, and applied scientists. The main purpose of SampTA is to exchange recent advances in sampling theory and to explore new trends and directions in the related areas of application. SampTA 2015 was held at American University, and it was the largest gathering of scientists on the AU campus. Professor Casey was the conference chair, Professor Robinson was the conference technical chair, and Professor Kevin Duke was the financial chair.

SampTA 2015 achieved some rather notable milestones. The meeting was endorsed by the Institute of Electrical and Electronics Engineers (IEEE) and the Society for Industrial and Applied Mathematics (SIAM). The conference papers were indexed, for the first time in SampTA history, in IEEE Xplore. SampTA 2015 also received grant support from the Air Force Office of Scientific Research (AFOSR) and the Army Research Office (ARO).

The intellectual merit of SampTA 2015 should not be understated. The SampTA conferences are a bridge between the mathematical and engineering signal processing communities. The mix between mathematicians and engineers is unique and leads to extremely useful and constructive dialogue between the two communities. SampTA 2015 had sessions on theory — compressed sensing, frames, geometry, wavelets, non-uniform and weighted sampling, finite rate of innovation, universal sampling, time-frequency analysis, operator theory, and application — A-to-D conversion, computational neuroscience, mobile sampling issues, and biomedical applications. The interaction at SampTA pushed the envelopes on these topics forward in both communities. SampTA brought together world-renowned mathematicians and engineers to work on these subjects. The plenary talks were delivered by top researchers in the fields. The conference papers were reviewed and presented via the EDAS system, and then uploaded into IEEE Xplore. Longer papers were published in a special double issue of Sampling Theory in Signal and Image Processing (STSIP). Selected speakers contributed chapters to Sampling: Theory and Applications: A Centennial Celebration of Claude Shannon.

The publication of the book has had the net effect of energizing the activity of signal, image, and information processing at American University. Professor Casey is now working on how to understand the flow of information through the internet. The internet has become central to most businesses, schools, and people's daily lives. A goal of network security is to keep traffic moving and keep the network free of viruses. The field of network tomography allows the creation of a system that will detect viruses as early as possible and work simply on the geometry or structure of the network itself. Professor Casey has developed a computationally efficient method to monitor internet traffic. His model monitors specific connected subsets of arbitrary weighted graphs (regions of interest) from the input output map corresponding to paths that have crossed such regions. Using this model, one can identify congested areas or even anticipate areas that will get congested, which would allow a system manager to take measures to avoid the stoppage of traffic. Viruses are detected by observing a rapid increase in network activity. He has accomplished his work by developing Harmonic Analysis in settings of both Euclidean and non-Euclidean spaces, and then applying this analysis to two specific problems: signal sampling and network tomography.

Professor Casey says that "this work is part of a more ambitious research project. The idea is to view information geometrically, and then apply the tools of geometry to analyze, communicate and/or store, and reconstruct information." He also just finished writing up a lengthy paper tying together the "mathematical gadgets" of Poisson, Cauchy, Jacobi, Shannon, Selberg, and Levin.

With thoughts of sampling, Professor Robinson is now turning to explore more discrete and geometric problems. One problem involves estimating the reach of a space, which quantifies the size of certain features in a space. Estimating the reach from samples is not subject to the theory of sampling discussed in this book, and it is potentially much more difficult. But since the reach is important in quantifying how well certain geometric signal processing algorithms work, recovering it is no less important. Professor Robinson is also starting to wonder if category theory and sampling have anything to teach each other. Although the name category theory evokes various philosophical ideas, it is the mathematical discipline of understanding structure-preserving transformations. Since the crux of sampling theory is how to preserve the structure of a signal by transforming it into discrete samples, category theory seems quite apt.