Dr. Stoodley is currently the director of the undergraduate neuroscience degree and runs the Stoodley Lab. The focus of the lab is the cerebellum (“little brain” in Latin), where undergraduate, graduate, and PhD students examine various aspects of cerebellar function. The cerebellum has been studied in the past for its importance in balance and coordination. But the Stoodley Lab is working to uncover the importance of the cerebellum in cognition and development, including conditions such as autism, ADHD, and dyslexia.

Around ten individuals work in the lab at any given time, with small teams assigned to each project. Dr. Stoodley serves as the principal investigator for each study, and a PhD student takes the lead on data collection and analyses for each project. Within the lab, various studies investigate the cerebellum’s roles in typical and atypical development, including reading fluency, understanding autism, and investigating the long-term outcomes of pediatric cerebellar lesions. Emily Barnes (BS Neuroscience ’24) explained how she became involved in the lab: “I reached out to Dr. Stoodley with an interest in her lab after starting her introductory neuroscience course, and I was met with a welcoming environment in which I could explore human participant-based neuroscience research and challenge myself as a student.”

The first study involves measuring the reading speed and reading abilities of both neurotypical and dyslexic individuals. This experiment utilizes transcranial direct stimulation, also known as tDCS, which is a neuromodulation technique that delivers low, direct electric currents to the cerebellum. This noninvasive method allows researchers to test the behavioral impact of modulating the cerebellum, specifically reading fluency in this study.

“Someone with typical reading ability does not have to think about reading. It is an automatic and fast skill for them. This may not be the case for someone diagnosed with a reading disorder such as developmental dyslexia where reading can be slow and effortful,” says Marissa Marko (PhD candidate, BCaN). “Reading interventions tend to focus on improving reading accuracy, but it is a lot harder to target the slow reading speeds often associated with dyslexia. We hope that by using tDCS, we can influence brain activity in the cerebellum, a region associated with skill automaticity, to improve reading speed in people diagnosed with dyslexia. 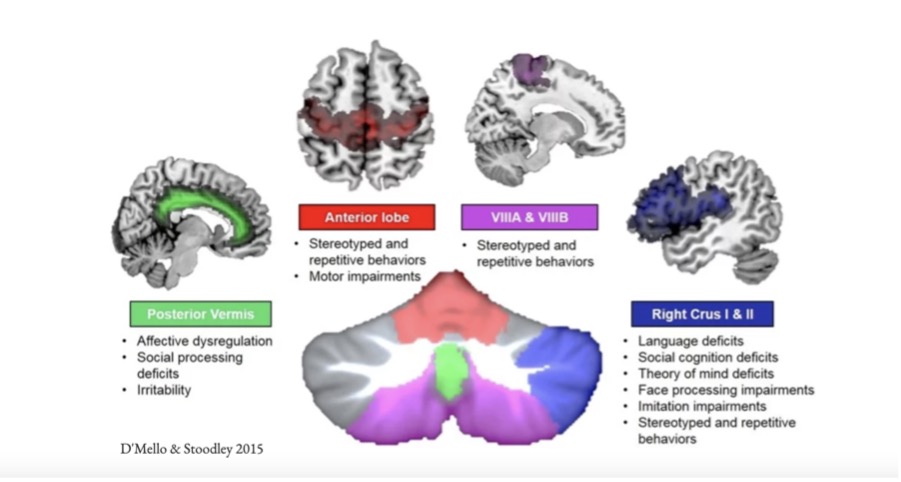 The second study is centered around autism and prediction. Specifically, lobule VII (lobule meaning “small lobe”) within the cerebellum is being studied in relation to its impact on other cognitive and behavioral regions of the brain, such as areas that control cognitive and social skills. The cerebellum is one part of the brain that shows structural and functional differences in autism. tDCS is also used in this study together with functional MRI, which measures brain activation patterns. This project aims to determine whether the cerebellum is important for making predictions in cognitive tasks in both neurotypical and autistic individuals and examines how cerebellar modulation affects activation patterns throughout the rest of the brain.

The third and final project aims to connect behavioral data to the location and size of a tumor in pediatric cerebellar tumor patients. MRIcron, a computer program that allows researchers to develop a three-dimensional model of a tumor, is utilized to create a voxel-based analysis of the tumor and any other brain differences. Once the image has been analyzed, it is then paired with behavioral data from neuropsychological exams. The lab is currently working alongside Children’s National Medical Center to see how the tumors impact behavior and development.

This groundbreaking research is being completed in a humble lab in AU’s Asbury Building and has the potential to change how neuroscientists understand the cerebellum and its role in cognition and cognitive development. Also, for undergraduate students, being intensely involved in each study and working with the principal investigator provides invaluable lab experience. Stoodley’s lab also provides unique insights into research involving people and requires extensive training on how to properly study and respect human subjects and inform them about what their participation in the study entails.

Another interesting aspect of the lab is that during the 2021-22 academic year, the lab solely consisted of women, paving the way and setting a new precedent for women within research. By creating a space for like-minded women to achieve their research goals and contribute to neuroscience as a field, a supportive community of people who share the same goals is fostered. The Stoodley Lab allows individuals to harness their curiosity and learn neuroscience tools while being surrounded by helpful, intelligent students.