The scientific method is often a laborious and arduous process where projects can take years of blood, sweat, and tears to complete. So, for scientists it is always a cause for celebration when an experiment produces an unexpected scientific discovery.

This is precisely what happened with the surprising discovery of parthenogenesis in the Gargoyle Gecko (Rhacodactylus auriculatus), a rare form of asexual reproduction that allows females to reproduce without males. This accidental finding was made by AU student Ingrid Schoonover (BS) in 2021 while working on her independent Biology Capstone research project, “the hacodactylus research initiative.” The project aimed to characterize life history tradeoffs in the Gargoyle Gecko between maternal investment in reproduction and the successful development of offspring. The research happened at AU’s new Hall of Science, but the actual lizard breeding occurred at an off-campus location rented as a gecko breeding facility. 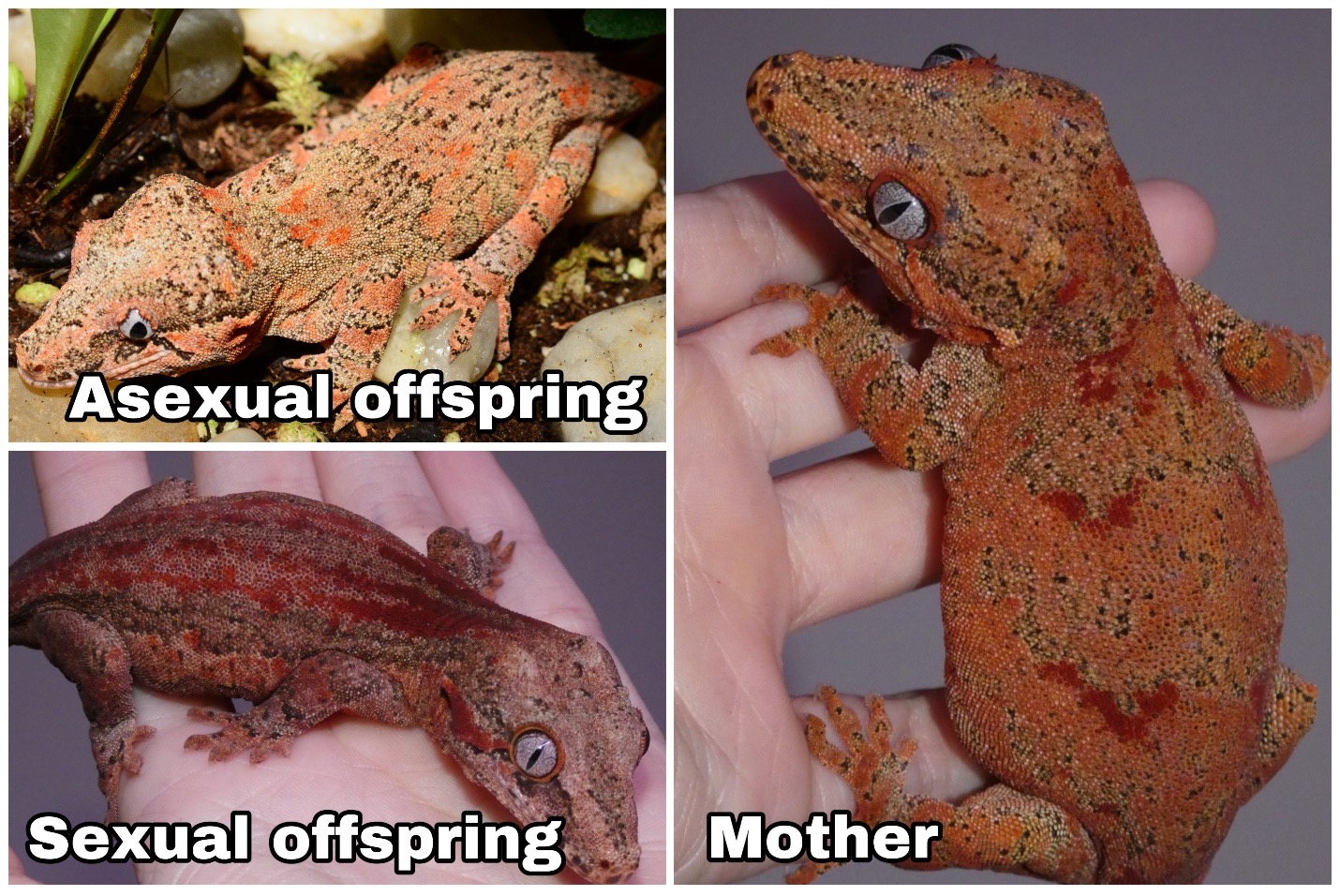 Gargoyle geckos are giant colorful lizards from the Pacific Island of New Caledonia, a lesser-known hotspot for biodiversity that features the greatest density of reptile diversity in the world and looks like a scene out of Jurassic Park. These geckos are keystone species that eat everything in their path including fruit, insects, and even other lizards. This incredibly varied diet means that they have a critical role in the health of their ecosystems by keeping prey populations in check and dispersing seeds throughout the forest. Like the many other species impacted by human activity, the gargoyle gecko is threatened with extinction due to mining in its habitat, which contains half of the world’s nickel. (The demand for renewable energy has skyrocketed due to the impacts of climate change, which has also ironically increased the need for nickel, a key element in car batteries.) The urgency of the threats in New Caledonia, in conjunction with encouragement from students and faculty at American University’s Department of Biology, is what prompted Schoonover to engage in research that could aid in gargoyle gecko conservation.

Many questions quickly emerged from the parthenogenetic gecko: How and why did this happen? How does the mode of reproduction affect their growth and development? What is the evolutionary significance of this behavior? To gain some further insight we spoke to Dr. Schaeff, an expert in animal mating strategies from the AU Department of Biology. She holds a PhD in Conservation Biology and Population Genetics, with research experience in animal behavior, conservation biology, and molecular ecology. Dr. Schaeff explained that in other parthenogenetic lizards such as Cnemidophorus, a genus of whiptail lizards, and in Lepidodactylus lugubris the mourning gecko, “the females need to simulate courtship and copulation with each other in order to lay eggs.” But the gargoyle gecko that laid the parthenogenetic egg was raised from a hatchling and kept alone for its entire life, which was shocking to Dr. Schaeff, who said, “It is really interesting and unusual for a species to reproduce asexually without the female-female mating behavior.”

The significance of this behavior is that a single female gargoyle gecko could colonize a new habitat without the need for a male, an evolutionary strategy that allows for rapid expansion into new areas. Another potential benefit to asexual reproduction is that it avoids the risks of sexually transmitted diseases and injury that accompany sexual reproduction, all while maximizing the transmission of genes since the offspring are all clones. In the case of the gargoyle gecko, it is likely that the mechanism of parthenogenesis is the result of terminal fusion automixis, a process where an egg fuses with its own polar body (instead of with sperm) to produce offspring that are essentially half-clones of their mother.

So, with so many benefits to asexual reproduction, then why don’t all animals reproduce in this way? Well, one potential explanation was offered by Dr. Fong during an evolution lecture where he introduced the Red Queen Hypothesis, states that harmful mutations will accumulate in asexually reproducing species over generations, whereas sexual reproduction removes harmful mutations while simultaneously introducing genetic diversity giving offspring the advantage of increased environmental adaptability and less diseases. In other words, the sexually produced offspring will almost always out-compete the asexual offspring over evolutionary time. 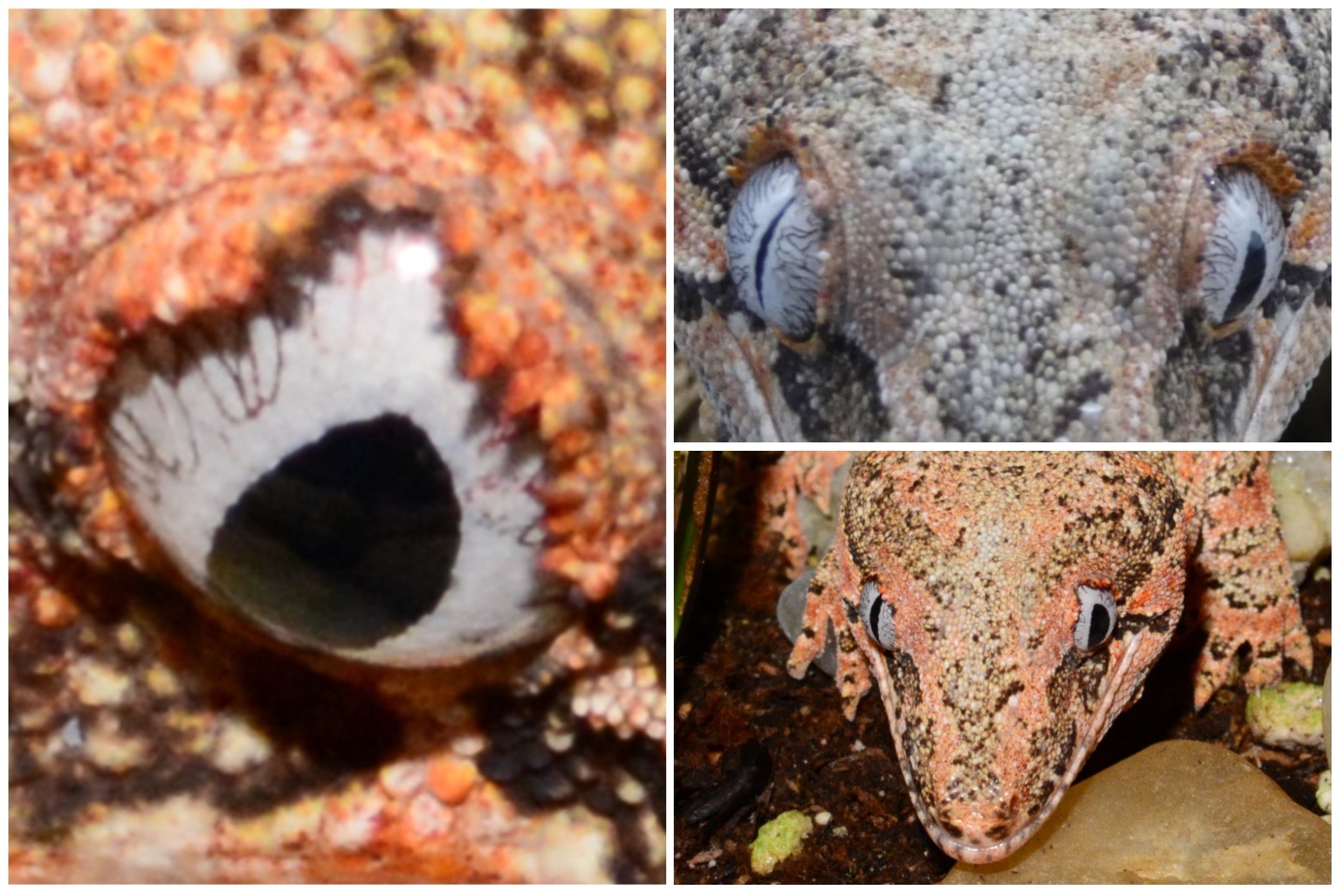 To test the application of the Red Queen Hypothesis with gargoyle geckos, the mother to the parthenogenetic baby was paired with a male and went on to produce six offspring via sexual reproduction. None of these six sexual offspring had any deformities, but the asexual gargoyle gecko has two facial deformities as a result of its lower genetic diversity: a slight underbite and a misshapen left pupil that is unable to respond to light, which makes the gecko essentially blind in one eye. The development of all the offspring was tracked for a year so that the growth rate of the asexual gecko could be compared to its sexual siblings and mother. The six sexually produced offspring grew 70 percent faster than their mother did in her first year of life, and the asexual offspring grew 20 percent slower than the mother. The results of this experiment were consistent with what was expected by the Red Queen Hypothesis, with the sexual offspring growing significantly faster at twice the rate of the asexual offspring, and having a lower rate of developmental deformities.

Schoonover, who graduated with a degree in biology, plans to continue researching and breeding gargoyle geckos with the hope of someday turning this into a full-time career and traveling to New Caledonia to conduct field research. The next step in this research is to further investigate how common this phenomenon is in the gargoyle gecko, when and why parthenogenesis is preferred over sexual reproduction, and eventually to test if the asexual gecko is capable of producing offspring of its own.