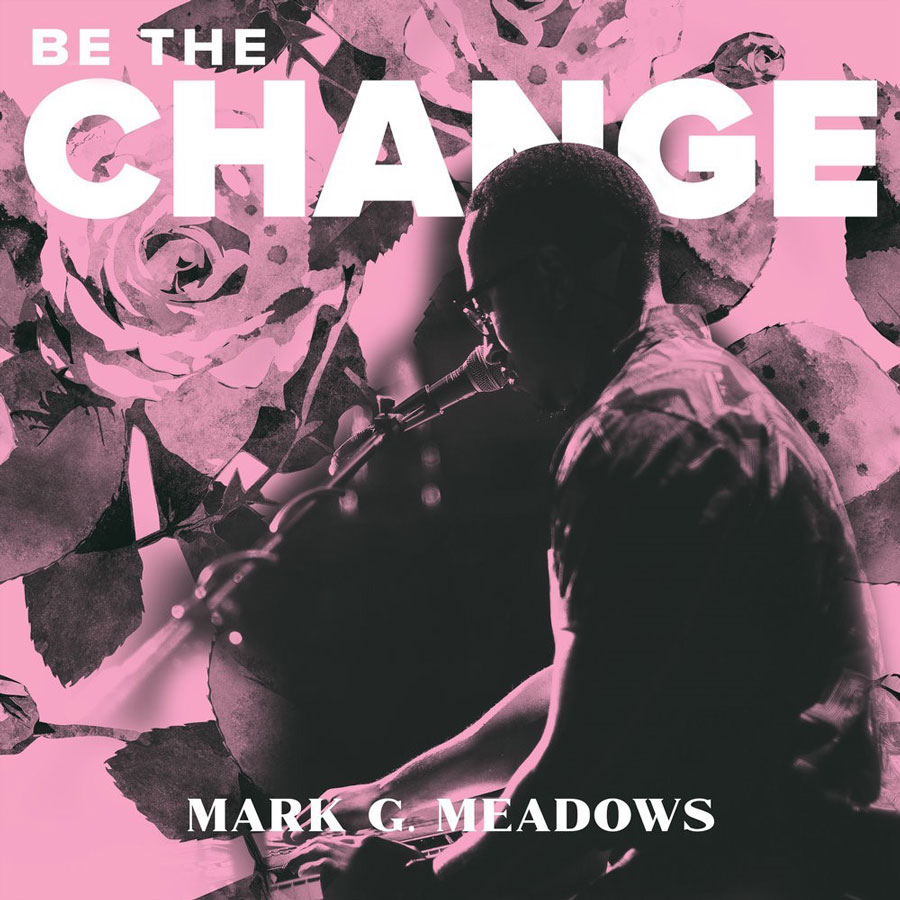 But that was just the beginning. Students also met Meadows’ collaborator, award-winning documentary film director Michael Ivan Schwartz. They got to watch an exclusive screening of But Don’t Believe Them, which uses interviews and musical performances to explore Meadows’ experience with the Black Lives Matter movement as both an artist and a Black man. And then students had a long interactive discussion with Meadows and Schwartz.

Nancy Jo Snider, ‘cellist and director of American University’s Applied Music Program, introduced Meadows. “I enjoy every class period we have, but this one in particular gives me shivers,” she said. “We are so lucky to have Mark G. Meadows here with us. He's a man who lives his truth, as an artist, through his music, and in the presentation we are lucky enough to see, hear, and share today.”

Meadows began by telling students that the event was a safe space and that he wanted participants to feel open and ready to share their thoughts and experiences from the heart. It set the tone for the event, which gave students opportunities to ask questions about Meadows’ artistic process, the Movement for Black Lives, how he feels about playing for different types of audiences, the role of art in social justice, and how he uses music as a platform for change.

The Making of Social Justice Music

Meadows has always been a man on a mission: to create a unifying sound that breaks through social barriers. When asked how he first decided to use music as his platform to share issues about social justice, Meadows explained that he was taught from childhood to send positive messages of love, hope, and joy out into the world to help others. He is the son of a gospel and jazz vocalist, and even before he started writing social justice music, his work had a preachy, “almost church-based message,” because that's how he was raised.

But things changed after Trayvon Martin was killed. “It did something to me that I haven't been able to express, and I remember being in the car and just so mad, just screaming,” he said. “It was a rainy day. It was awful. Then I talked to my wife, and she said, ‘Write about it.’ So, I wrote the song, ‘What Would You Do.’ I had woken up in the music, and from then on, just kept doing it.”

How to Change the World

When asked why he chose music as his route to advocate for social change, as opposed to policy or protests, Meadows said, “Because music is my best platform. It’s what I’m best at.” But he also reads, donates, works to educate himself on current events, and attends protests. “I think that it is important for me to use music,” he said. “But more importantly, most importantly, is policy. Policy is the cause of all of this, the systems in play, and so giving your time and money to [fixing] policy is the most important thing.”

Schwartz added that he has been involved in the movement for Black equality for a long time, including hands-on mentoring relationships in the Black community that have given him access to different people’s stories and experiences.

“I think a lot of us have a friend who is a Person of Color who is living a different experience than ourselves. And that's a good inroad to listen and to hear, but I think we also have to build relationships. Mark and I actually met at a church that was very intentionally mixed race. And so, putting ourselves in different places and spaces as a volunteer, as an advocate, or just in friendships, I think, is also a huge component to changing people's opinions, and changing our own understanding of the world.”

The Q&A ended with discussion of art and activism in the post-pandemic world, with a plea from both Meadows and Schwartz for people to stay focused and determined during these difficult times. They called for action “while you’re stuck in quarantine.”

This is a strong theme in Meadows’ life. After the last presidential election, he produced his fourth studio album, Be the Change. “Even if you can't control policy, you can't control who's in our presidency, at least you yourself can be the change you want to see,” he explains. In fact, since the pandemic began, Meadow’s social justice music has become even more popular than before, and he says he’s become energized in many ways.

At the same time, Meadows realizes that his shift to “music with a message” hasn’t always been appreciated by all of his audiences. “People don't like it as much,” he says. “But, at the end the day, I have to stand for what I think is right, and I think it's a balance. I don't do concerts where I'm doing a whole hour of ‘Wake up, you idiots.’ But I do make sure that every single concert, every single set list, everything that I try and spend my time doing, I want it to at least have a tinge of standing up for something. I’m not beating somebody over the head with it, but I’m whispering it a lot.”

At the end of the day, Meadows told students, “Do what you love to do and make sure that it has some kind of meaning. That meaning for me is social justice and change.”

Snider says that Meadow’s message in But Don’t Believe Them is original and authentic. “It is personal, from the heart, and welcomes each of us to be agents of change in a way that challenges us to follow his beautiful model, to speak out through our art, and to support, unselfishly, what we believe in in order to move the pendulum of change to a better place for all,” she explains. “What he and Michael Ivan have created does just that, and they inspire the rest of us, students and faculty alike, to follow their powerful example.”