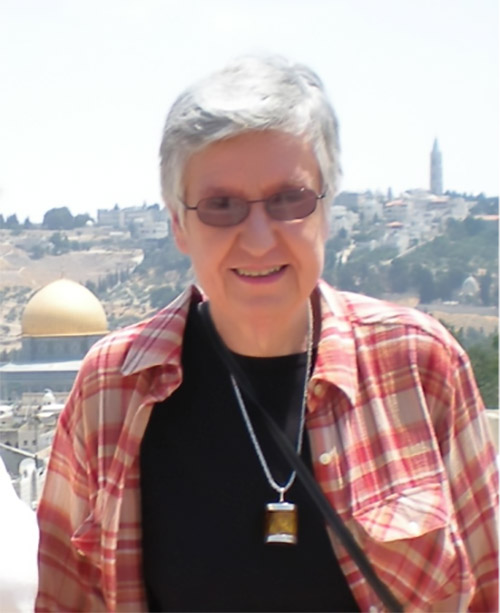 American University Distinguished Professor of Mathematics and Statistics Mary Gray, alongside her husband and fellow mathematician Alfred Gray (1939–1998), has lived her life in the pursuit of mathematics excellence and social justice.

To recognize this work and support the next generation of mathematicians working for human rights, the Association for Women in Mathematics has established the Mary and Alfie Gray Award for Social Justice. It will reward the vigorous and imaginative application of the mathematical sciences to advancing the cause of social justice, defined as promoting a just society by challenging injustice and valuing diversity.

“Dr. Mary Gray is a founder and past president of Association for Women in Mathematics, and recipient of the Presidential Award for Excellence in Science, Engineering and Mathematics Mentoring,” says Artur Elezi, AU associate professor of mathematics and statistics. “Her lifelong commitments are the use of statistics to fight discrimination, and promote equality, human rights, and social justice. Her late husband, Alfie Gray, was well known for helping underrepresented students and promoting mathematicians all around the world. This award deservedly recognizes both their efforts in promoting a just society and valuing diversity.”

Gray has written two books, published more than 80 articles, and lectured throughout the United States, Europe, Latin America and the Middle East. She serves as the chair of the Board of Directors of the American Middle East Education and is a member of Statistics without Borders. Gray has received the Presidential Award for Excellence in Science, Engineering, and Mathematics Mentoring from President George W. Bush. She has also received honorary degrees from the University of Nebraska and Hastings College.

Her work for social justice and human rights has been felt at American University and impacted lives across the nation and around the world. At AU, Gray helped establish a PhD program in mathematics and mathematics education targeted in part to underrepresented groups in STEM, and she went on to mentor 34 PhD students. She established another successful program to bring 44 Palestinian and Syrian students to AU for statistics and computer science degrees. And with National Science Foundation funding, she set up several STEM undergrad programs for students from underrepresented groups.

On a national and international level, Gray has been involved in a myriad of human rights issues, using her expertise in statistics and law to improve situations for people across the world. She has served as a statistical expert (and attorney) in employment and education cases charges of race and gender discrimination, and she testified in cases involving economic issues of women’s rights in employment, education, sports, and the military. As chair of Amnesty International USA, she worked on death penalty and minority rights issues. As international treasurer for Amnesty International, she was involved in programs throughout Europe, Asia, Africa, and Latin America. She worked on a post-genocide project in Rwanda; participated in statistical studies of refugees in Syria, Iraqi Kurdistan, Uganda, and Panama; participated in a study of education in Myanmar under UN auspices; organized a survey of secondary school facilities in Iraq; and organized or participated in numerous international conferences.

Though Gray says she’s honored by the establishment of an award in her name, and her husband’s name, the special part of the Mary and Alfie Gray Award for Social Justice is that is sets up other people in the mathematics and statistics field to continue their good work and impact the world in positive ways. “I am honored that AWM has established this award to recognize those who share our commitment to the use of mathematical knowledge and skills to further our commitment to social justice,” she says.

To learn more about the Mary and Alfie Gray Award for Social Justice, visit the Association for Women in Mathematics website.