You brought your individual talent, the lessons you learned from your own family and your home, and your dreams. And if those dreams changed over these past years, I hope we only lifted them higher.

To be honest, I’d much rather be in the audience right now listening to one of my fellow graduates from the MBA cohort. You are an incredibly talented group of people and it has been a privilege getting to know you all over the past two years. I’d especially like to acknowledge my international classmates. You traveled far from home to study here in Washington DC. It takes real courage to do that and we’re lucky to have you here. Your unique perspectives added incalculable value to our classroom discussions and reminds us that you can’t study business in a serious way in the 21st century without a truly global perspective. My time at Kogod has certainly broadened my perspective. I spent almost most of my time in the military on the high seas and in foreign countries so I considered myself fairly well traveled. But this program took me to new and unexpected places both physically and intellectually- from management consulting for a Norwegian IT firm doing business in Poland to standing in Mandela’s former prison cell on Robben Island in South Africa. From working on Greater Washington’s pitch for the new Amazon headquarters to working for Project 500- an innovative business development program helping accelerate diverse entrepreneurs in the District. Probably my most surprising classroom experience was studying Islamic Finance with Professor Nakshbendi. Sir, your passion for teaching and the way you pushed the class to move beyond the numbers and engage with the ethical implications of every transaction were inspiring. You are truly a credit to this University.

At this point in the speech I’m supposed to offer you some advice. I think that’s ordained by the Commencement Gods. To be honest I really don’t like giving advice. In the military I found that the people who loved giving advice were probably the ones you shouldn’t listen to. One of my personal Heroes, General Colin Powell, wrote a wonderful book called “It Worked For Me.” General Powell shares the behaviors, routines, and values that guided him through his incredible career of public service. In that spirit, here are two things worked for me so far: Serve something greater than yourself and tell the truth. That probably sounds cliché, but the older I get, the more I think those might be the two most important beliefs I have.

You’ll notice I said serve something; not someone. We spend a lot of time talking about the “someone” here in Washington DC and in business school- be it our elected leaders or CEO’s with bold visions for the future. But I’ve found putting all your faith and hope in “someone,” leads to inevitable disappointment. The world is simply too complex and we humans are too flawed; even the best of us. This is especially true if that “someone” is yourself. I’ve found it more useful to try to serve “something” although you’ll have to define for yourself exactly what that means. It could be an idea. Or A set of principles. Liberty. Truth. Justice; or at least the possibility of justice. These are by no means simple concepts. You’ll have to choose your own and choose very carefully. It can be incredibly difficult to know what to do. But if you choose to serve something greater than yourself you will at least have a True North toward which you can stumble. Imperfectly, yes. But still forward. It’s worked for me so far.

Tell the truth. Pretty straightforward, right? I know none of our textbooks or business case studies recommended dishonesty or fraud as an effective business strategy. But if you’ve spent any time working you know it isn’t always obvious. Speaking the truth, or even just asking why, can be a radical act in the professional world. Dishonesty can take many forms. Silence is one. Organizational inertia often rewards silence and “going along to get along.” Recent reporting by the Wall Street Journal revealed a culture of “success theater” at a Fortune 500 company. The “success theater” idea was that managers had to hide any bad news from the CEO. He only wanted to happy talk. If we’re being honest, I bet we’ve all be actors in the “success theater” from time to time. Let’s stop. As MBA’s we learned to explicitly state our assumptions and follow the facts wherever they might lead to make the business case. That means being open to changing our minds. If we all decided to do a bit more of this, who knows what kind of world we could build. It’s worked for me so far.

In closing, let me say congratulations to the Class of 2018 and the graduate students. Enjoy the day. Do right and do your best. Thank you.

Jeffrey Zients delivered the KSB Commencement Address for the Spring 2018 graduates on May 12 in Bender Arena.

Jeffrey Zients was President Obama's principal economic policy advisor as Director of the National Economic Council (2014 - 2017). Jeff also served in the Obama Administration in the Office of Management and Budget as Acting Director (2012 - 2013), and Deputy Director, Management and Federal Chief Performance Officer (2009 - 2011). During his time in the Administration, Jeff was directed by President Obama to spearhead the turnaround of the failed healthcare.gov website launch (2013). He founded and managed a private equity firm, Portfolio Logic, LLC (2003 - 2009) and served as Executive Chairman, Chief Executive Officer and other roles with the Advisory Board Company and Corporate Executive Board (1992 - 2003). He graduated summa cum laude from Duke University. 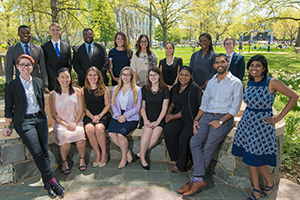 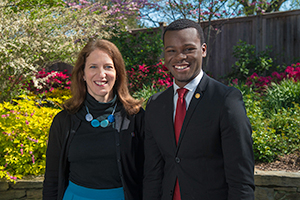