On the morning of June 10, 1963, President John F. Kennedy arrived on the campus of American University set to deliver a commencement speech that would change the course of history. From the podium emblazoned with the presidential seal, Kennedy put forth "A Strategy of Peace," a rallying cry for an end to the nuclear arms race with the Soviets and a beginning of a new era of peace with all nations.

With the specter of the Cuban Missile Crisis still hanging heavy over the nation, Kennedy's speech brought hope that a real and lasting peace could be achieved. During the nearly 27-minute address, Kennedy called for the development of a test ban treaty, pledging that the United States would suspend nuclear tests in the atmosphere so long as other nations did the same. Kennedy also encouraged a respect and understanding of the Soviet Union, unfathomable just months before the speech. It was a watershed moment in the history of U.S.-Soviet relations.

Kennedy's speech, written by long-time advisor Ted Sorensen, was unprecedented in its dovish pursuit of peace. Few presidents before him ever spoke so artfully and passionately about the need to work toward unequivocal amity.

In 2013, we celebrated the 50th anniversary of Kennedy's achievement and the profound impact it had on American University and the wider world. "A Strategy of Peace" is remembered as one of the president's finest and one of the most inspiring commencement addresses ever delivered. Kennedy's words ring as true today as they did years ago as we continue building peace for all time. 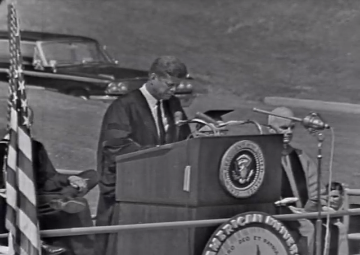 A video of JFK's full 1963 Commencement Address at AU is available from the John F. Kennedy Presidential Library and Museum. 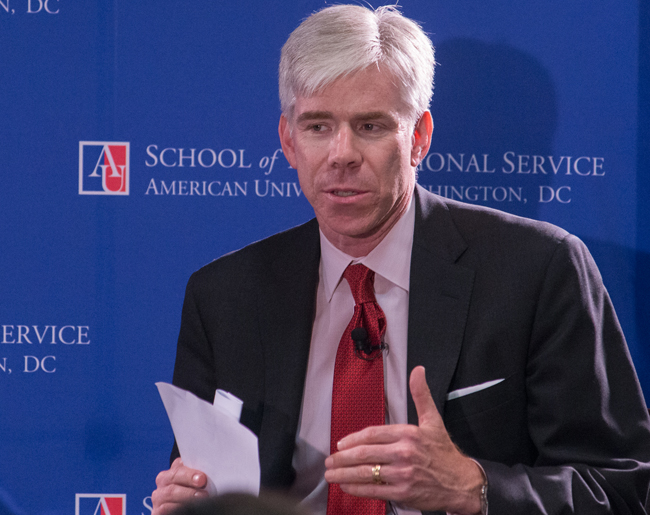 Meet the Press at SIS: NBC's David Gregory returned to his alma mater for an event marking the 50th anniversary of JFK's speech at AU.

The speech was one of the greatest by any modern leader.

"The speech was one of the greatest by any modern leader. For years, I talked about that event as one of the most memorable and the speech by John F. Kennedy as the most responsible and eloquent by any president in modern history. It was a beautiful day where a few hundred people gathered outside at the wonderful American University green lawn."
– Jamil Jreisat

"President John F. Kennedy delivering his historic speech announcing the end of U.S. atmospheric nuclear testing was a milestone in my life. The ceremony was solemn, in contrast to a warm, sunny day. I shared a great bond with all my fellow graduates successfully completing our four-year academic challenge and entering the promising doorway to our futures. American University is a very important ingredient in my formation as a man."
– Lee J. Kerbel

"I'll always remember that great moment when I was at the 1963 graduation where I received my master's in business administration and I had the great honor of shaking hands with a really great president whose name will always be remembered for his charm, charisma, and achievement in such a short time of American history."
– Wafa DaJani

I think many of us were just awestruck to be in John F. Kennedy's presence, having been students throughout the entire Camelot period.

"It was not until years later that I realized the importance of the speech that was to become known as "the American University address." I think there were several factors that mitigated against fully comprehending the level of importance later given to the speech. First, we were all very excited to be graduating and it was beastly hot, especially under those black robes. Also, I think many of us were just awestruck to be in John F. Kennedy's presence, having been students throughout the entire Camelot period."
– Allan S. Pilson

"Having just lived through the Cuban Missile Crisis and as the parents of two small children with extra supplies of food and water, duct tape, and plastic sheeting stored in our basement, it was with great relief that we heard John F. Kennedy declare that "world peace was the most important topic on earth" and that the United States would stop testing nuclear weapons and work for a test ban treaty with the Soviet Union."
– Marilyn Heilprin

On the morning of June 10, 1963, President John F. Kennedy arrived on the campus of American University set to deliver a commencement speech that would change the course of history. "A Strategy of Peace" is remembered as one of the president's finest and one of the most inspiring commencement addresses ever delivered. Kennedy's words ring as true today as they did 50 years ago as we continue Building Peace for All Time.

Since its launch in 1968, the student-run organization has been responsible for bringing numerous prominent speakers from all different backgrounds to campus.

Professor Philip Brenner looks back at the Cuban Missile Crisis to share insight on how best to prevent and mitigate international security crises today.

AU's sign and students from 1960 show a snapshot of the era.

AU President Hurst Anderson looks on during the speeches.

A view of Reeves Athletic Field set up for the 49th Commencement.

Professor Woodrow Wilson once said that every man sent out from a university should be a man of his nation as well as a man of his time, and I am confident that the men and women who carry the honor of graduating from this institution will continue to give from their lives, from their talents, a high measure of public service and public support.