In addition to causing the deaths of five people, defacing the United States Capitol building, and tarnishing American democracy, the January 6, 2021 Capitol Hill riot was also a violent exposition of American far-right symbology. Among the mob, militiamen in paramilitary gear were adorned with Roman numerals and skulls. White supremacists wore their depiction of the Crusader cross. Conspiracy theorists donned themselves with the letter “Q.” In the background, flags picturing frogs and skulls waved alongside those of the Trump/Pence presidential campaign.

The Federal Bureau of Investigation continues to seek the public’s assistance in identifying individuals responsible for the violence of January 6. Decoding the symbols of the far-right will provide key insights into these group’s ideologies, compositions, and histories.

Among the Capitol Hill rioters were the far-right militia groups the Oath Keepers, the Proud Boys, and the Three Percenters. On January 27, the Department of Justice (DOJ) indicted three individuals associated with the Oath Keepers for conspiring to obstruct Congress. The Oath Keepers were formed in 2009 by Yale Law School graduate and former US Army Paratrooper Elmer Stewart Rhodes, following the election of President Obama. The group focuses its recruitment on current and former members of law enforcement, emergency first responders, and military personnel. While it boasts a membership exceeding 10,000 individuals, researchers estimate the Oath Keeper’s numbers to be closer to 5,000 members spread through local chapters across the United States. The Oath Keepers are not a cohesive organization, but a “large, but loosely organized collection of individuals.” The Oath Keepers are identified by their yellow and black banner that proclaims the group to be “guardians of the republic.”

The Proud Boys maintained a strong presence in Washington, DC through the Capitol Hill riot. The Proud Boys organization was conceived by Gavin McInnis, the co-founder of Vice News, in 2016. McInnis used his disdain for “PC,” or politically-correct culture, to unite a group of “like-minded white men in New York City” that would become the foundation of the Proud Boys. In September, 2016 McInnis penned “Introducing: The Proud Boys” in Taki’s Magazine to announce the formation of a group of “western Chauvinists who refuse to apologize for creating the modern world.” By August 2017, the online magazine Rewire estimated that the Proud Boys was composed of 6,000 members, with the organization’s Twitter and Facebook accounts claiming over 20,000 followers by December. In 2018, Twitter and Facebook both announced that accounts connected to The Proud Boys had been shut down. The Proud Boys namesake comes from Disney’s Aladdin, in which the film’s protagonist sings a song entitled “Proud of Your Boy.” Members of The Proud Boys often don orange hats and yellow-trimmed black polo shirts.

Historian John Ferling of the University of West Georgia has disputed the “three percent myth,” demonstrating that the number is falsely derived from pension files and bounty-land warrant applications, while estimating the Continental Army stood at 100,000 soldiers and additional militiamen. The Three Percenters’ founder, Mike Vanderboegh, has claimed in the Sipsey Street Irregulars blog that the “three percenters” designation also represents the three-percent of gun owners who “will not disarm, will not compromise and will no longer back up at the passage of the next gun control act.” Three Percenters adorn themselves in the Roman numeral ‘III’ and have also been seen wearing Marvel Comics’ “The Punisher” paraphernalia. 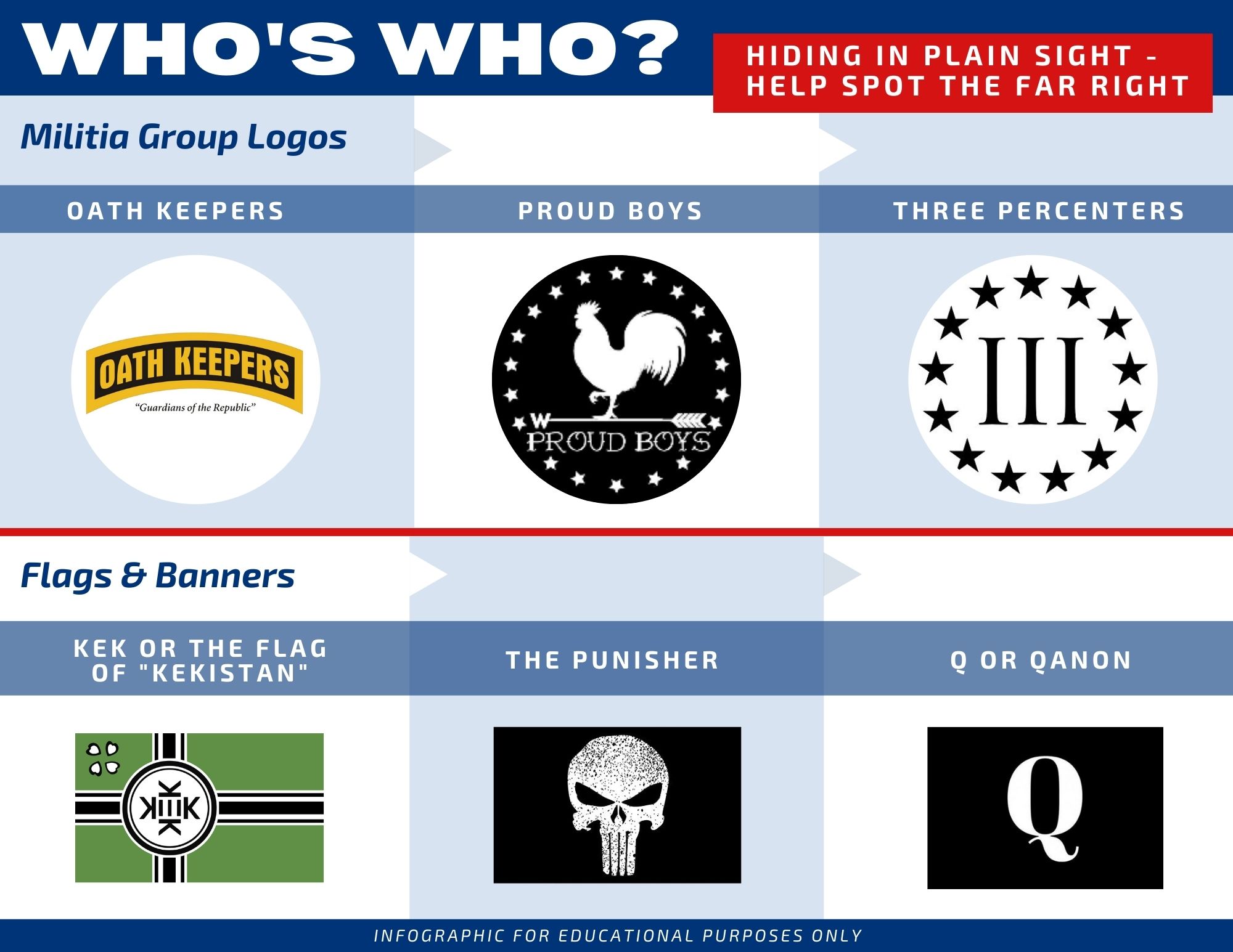 Beyond the blue Trump/Pence flags carried by countless rioters, the neon-green “KEK” flag could be seen waving above the crowd. Kek is a satirical religion with a frog-headed god who resides in Kekistan and represents darkness and chaos. The flag loosely resembles the Nazi flag – treated as a provocative joke among some on the far-right. The name, usage, and ideas surrounding Kek originated in online gaming culture, specifically chat boards devoted to World of Warcraft. Within World of Warcraft, players exclusively chat with members of their own “faction,” while opposing players’ chats are rendered in a cryptic form based on Korean. Thus, the chat phrase “LOL” (meaning laugh out loud) appeared as “KEK.” Kek is treated as an “inside joke” among far-right groups and is used as a signal of one’s adherence to principles of chaos and destruction.

Kek is not the only symbol to be derived from pop-culture. Marvel’s anti-hero, The Punisher, has also been emblemized by the far-right. Flags depicting The Punisher’s logo, an angular, white skull, were deployed on January 6 by members of The Proud Boys, The Oath Keepers, and unaffiliated rioters to signify the failures of law and order. The Punisher was introduced in a 1974 Spiderman comic book and later became a standalone Marvel character, seeking retribution for the slaying of his family. With the advent of the wars in Iraq and Afghanistan, The Punisher’s logo was used frequently by members of US Special Forces, including Navy SEAL Chris Kyle, who adopted the logo on his gear and was the main character of the biopic “American Sniper,” based upon Kyle’s bestselling book. The Punisher skull, symbolic of the fictional character’s belief that traditional law and order fails to address the concerns of the people, has since been adopted to represent similar misgivings of far-right activists. Flags adorned with the letter ‘Q,’ referring to the conspiracy theory QAnon, were prominently displayed among rioters. QAnon emerged online in 2016 disseminating the fringe theory that a secret, pedophilic alliance of prominent media figures and members of the Democrat Party are conspiring to take over the world. The purveyor of these conspiracies, known as Q, is an alleged anonymous government insider bent on revealing “the truth” to the world and thwarting the elitist cabal. Q’s appeal is limited: a study in October 2020 found that only 7% of respondents had a favorable view of QAnon. Despite its limited reach, however, QAnon attracts an array of followers. While the early adherents were mainly far-right Trump supporters, the movement expanded its reach to include anti-lockdown libertarians, evangelical Christians, and Wall Street executives.The melding of these organizations, motivated to disrupt the peaceful transfer of power or by the erroneous belief that the 2020 presidential election had been stolen, should be a wake-up call for our nation. It is vital to recognize the various groups and be aware of recruitment tactics. In June 2020, The Atlantic published one of Q’s decrees: “If you were an adherent, no one would be able to tell. You would look like any other American…You must find those who are like you. And you must be prepared to fight.” In the aftermath of the Capitol Hill riots, these words are haunting. The January 6 riots resulted in five deaths and despicably publicized the symbols of the far-right.

Kyle Sallee is a 2020-2021 CSINT Fellow and current graduate student in the School of International Service’s U.S. Foreign Policy and National Security program. Kyle is exploring the impacts of Chinese and Russian state-owned nuclear corporations on the proliferation of nuclear energy within Eurasia and Africa.