Among the universities of the land American University is yet young; but you have a great future - a great opportunity for initiative, for constructive thinking, for practical idealism, and for national service.

The School of Public Affairs (SPA) at American University was born at the height of a crisis. The Great Depression gripped the nation through the 1930s, leaving one in four Americans unemployed. President Franklin Delano Roosevelt promised a “New Deal” to get the nation back to work. But, how would the government implement this vast and pioneering legislation? Through SPA, established in 1934, to train federal employees to solve complex problems in public affairs.

SPA grew rapidly, from 80 students in its first semester, to 200 in the second, to more than 1,000 annually by 1937. In that same year, SPA launched its undergraduate program, establishing itself as a seat of scholarly thought and public service in the heart of the nation’s capital.

Through the next eight decades, SPA continued to evolve to meet the challenges of the times. The tumultuous 1960s saw the school expand its programs to include more public service training, responding to students calls for more emphasis on addressing issues of racial justice and poverty. In the present day, SPA has taken an interdisciplinary approach, producing scholarship that draws on various disciplines to create public policy solutions to pressing problems across a multitude of areas. SPA students and alumni have been involved in the policy debates resulted in Medicare and Medicaid, federal education funding, the National Endowment for the Arts, environmental legislation, and a long list of acts and programs that have benefitted the nation.

Through many changes in the scope of government and the nature of Washington, SPA alumni continue to find careers in government agencies, nonprofits, and other institutions. Drawing on a tradition of collaboration between academia and government service, our graduates work to build a better world by expanding the scope of what government can do. 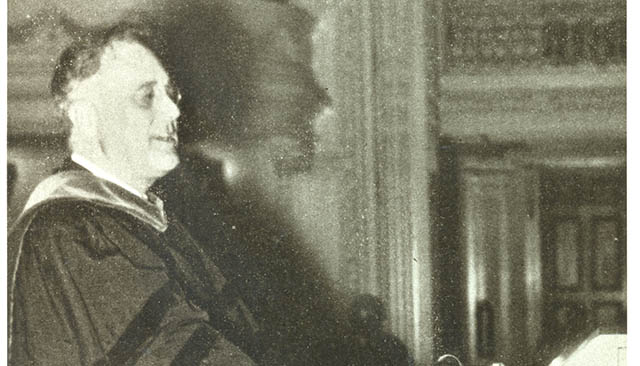 1940: Original location of School of Public Affairs at 19th and F St.

2017: Steps of Kerwin Hall, home of the School of Public Affairs.